You want to know what’s in your food before you buy it, before you order it, and before you eat it – because your health depends on what you eat. Pocket-Sized Spectrometers Reveal What’s In Our Foods, Medicines, Beverages, etc.. 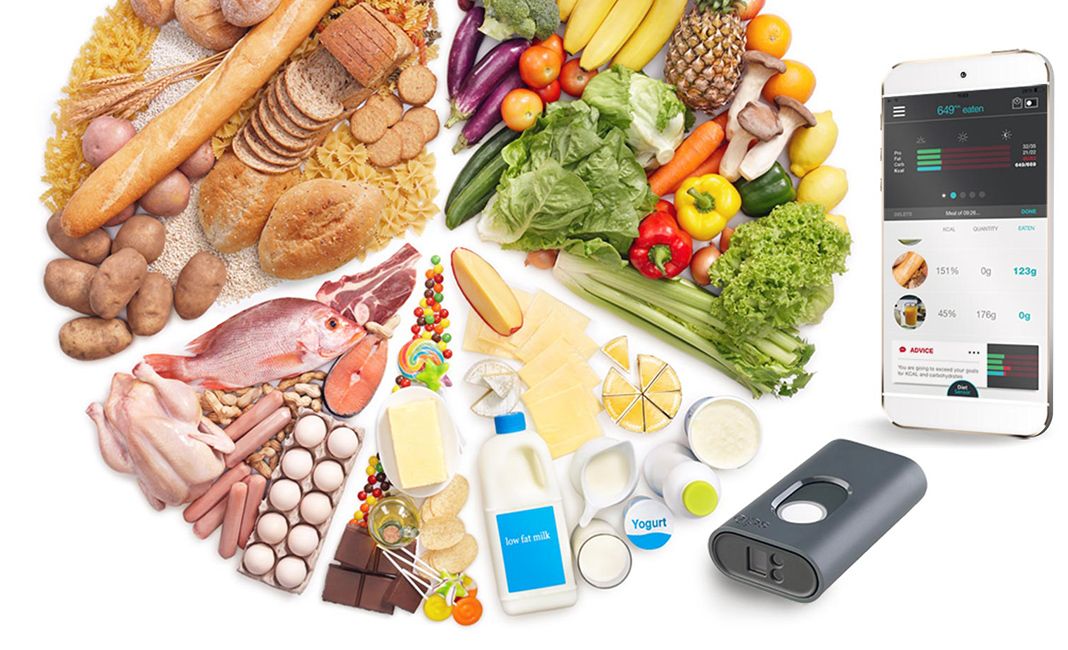 Foodscanners detect the molecular “signature” of your food and then sends the details to your smartphone through its Bluetooth connection. A database translates that signature into nutritional content.

Beam-up The Facts About What’s In Your Food

Many foods contain chemicals and allergens that we want to avoid. But it can be difficult to know whether these chemicals and allergens are in your food or not. How can you tell if your food contains the nutrients you need? What about things like sodium, gluten or trans fats that you might be trying to avoid? Food labels can give us some information if they’re available, but they are not always intelligible and some ingredients may not even be reported.

We have invented a system called TellSpec combining a spectrometer and a unique algorithm to tell you the allergens, chemicals, nutrients, calories, and ingredients in your food.

TellSpec is a three-part system which includes:

(2) An algorithm that exists in the cloud; and

(3) An easy-to-understand interface on your smart phone.

Just aim the scanner at the food and press the button until it beeps. You can scan directly or through plastic or glass. TellSpec analyzes the findings using the algorithm and sends a report to your phone telling you the allergens, chemicals, nutrients, calories, and ingredients in the food. TellSpec is a fast, simple, and easy-to-use way to learn what’s in your food. We need your help to make it smaller and manufacture it as a handheld device.

What Will TellSpec Do?

TellSpec will identify allergens, chemicals, nutrients, calories, and ingredients in foods or beverages.

TellSpec will warn you when a food contains allergens such as gluten or egg.

TellSpec will track your daily calories and help you achieve your daily targets.

TellSpec will track what you eat, and based on your reports of how you feel, it will help identify your food sensitivities.

TellSpec will help you monitor your intake of toxic chemicals such as mercury, so that you will stay within recommended limits.

TellSpec will track your intake of essential vitamins and minerals, and help you ensure that you are getting the right amount. 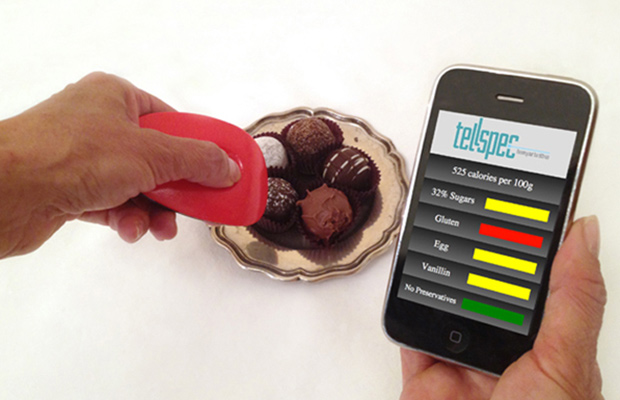 How Will It Work?

Light is made up of particles called photons. When you beam the low-powered laser in the TellSpec scanner at the food, some of the photons are absorbed, raising the energy states of the molecules in the food. Lower energy photons are then reflected back. The spectrometer inside the TellSpec scanner sorts these photons by wavelength and counts them. The resulting numbers, called a spectrum, describe the chemical compounds in the food.

This spectrum is uploaded to our analysis engine where it is analyzed and correlated with other reference spectra. Information about the allergens, chemicals, nutrients, calories, and ingredients in the food is then downloaded to you and displayed on your smart phone.

TellSpec responds to your specific food requirements and preferences. TellSpec is a smart system that learns as you use it, so that you see the information that is of most interest to you.

An SDK For Developers And Researchers

We believe that the community can develop applications of TellSpec that go beyond our dreams. So we are also developing a software development kit (SDK) that will provide developers with tools for directly accessing the food analysis data from our servers so that they can create their own amazing applications. The SDK includes source code for iPhone and Android apps, an API for TellSpec’s analysis engine, JSON specifications for data interchange, and access to information about each nutrient, chemical, allergen, and ingredient.

The TellSpec food analysis algorithm learns from each scan. So every time you scan, you not only learn about what’s in your food, you also help others learn what’s in their food. That’s why distributing TellSpecs globally, and into the developing world, is so important to us. As the algorithm learns from reference scans from around the world, the analysis everywhere will get better and better.

Our goal is to make this amazing system available to everyone, everywhere; and to encourage others to use our tools to make great things for the good of human health. 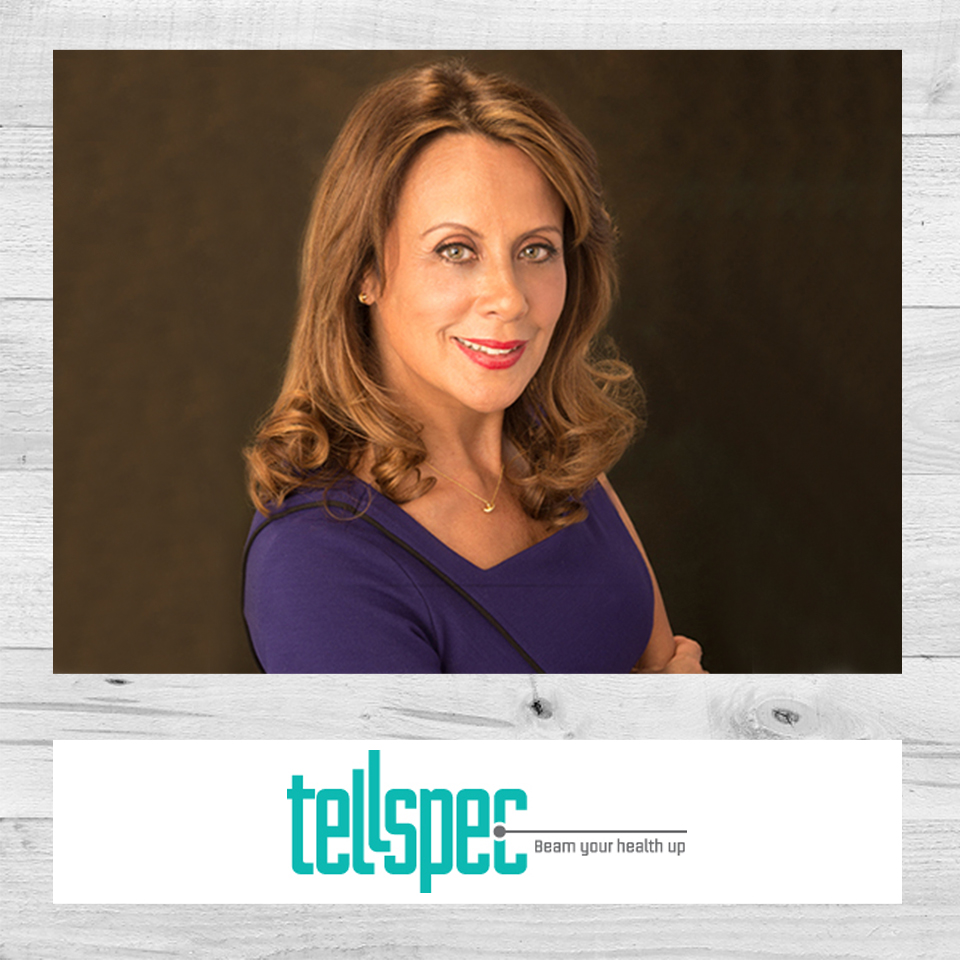 In the video, the device shown is a 3-D model of the future industrial design of the TellSpec scanner.

TellSpec has developed a scanner and a cloud analysis engine. These work together to gather a spectrum of your food, analyze that spectrum, and display information about the food on your smart phone. We need your help to make it smaller and manufacture it as a handheld device.

The handheld scanner is a Raman spectrometer. The low-powered laser inside the scanner emits coherent light through the front window. Stimulated light from the sample is then collected through a filter in the window that removes the Rayleigh scattered light. The light then passes through a diffraction grating that disperses the light onto a CCD detector. The CCD detector converts the light into an electrical signal that is then digitized and sent to the smart phone over Bluetooth.

The smart phone receives the digital spectrum of the food and transmits it to the TellSpec analysis engine which processes it, compares it to reference spectra, and runs a learning algorithm on it. The output is interpreted through a large database, and information about the food is selected and customized for the user. The smart phone then downloads the information and displays it to the user.

Our designs for the scanner and the user interface are guided by the principle that interested people should be able to use the TellSpec system easily and immediately, without training and without reading a user manual; and they should be able to understand and use the displayed information without an extensive knowledge of food chemistry.

Until recently, a large and expensive industrial spectrometer would have been needed to gather spectra of adequate resolution and signal strength, but recent developments in miniaturization of optical devices and in nanophotonics have made it possible to manufacture tiny and inexpensive spectrometers. A new and powerful method of analyzing spectra with a learning algorithm has also enabled the use of much weaker signals without loss of accuracy.

Over the past nine months, we’ve come a long way in the development of TellSpec. We’ve developed the analysis engine, coded it, and tested it; we’ve successfully tested three prototype scanners, including one using a nanochip; we’ve finished the industrial design for the scanner; we’re well along with the user interface design; and we’ve been doing an independent validation of the underlying algorithm.

With your help, we can:

• Manufacture the TellSpec scanner and get all the regulatory approvals needed to ship it.

• Deploy the food analysis engine on servers that reliably provide quick analysis of the spectra.

• Develop the SDK for Android and iOS platforms so others can build exciting apps.

By backing TellSpec, you will be a key part of making this revolutionary technology a reality.

The Team Behind It

Isabel and Stephen are working with a team of industry veterans who are passionate about this innovative new way of analyzing what’s in your food. Together, we have experience in creating consumer software, hardware, and services in fields ranging from environmental health and preventive medicine to entertainment and education. Now we’re excited to build a healthier world by empowering people to make informed choices about what they eat.

Isabel Hoffmann is CEO and Founder of TellSpec Inc., a biotech company devoted to building a greener and healthier world by empowering people to make informed choices about what they eat. She has a proven track record in leading and scaling early-stage businesses.

In the past 19 years, she has founded eight companies in the fields of health care, genetics, technology, entertainment and education, achieving consolidated revenues of US$75M, business valuations of US$300M, as well as creating 2,300+ jobs in the North American, European and South American markets. She has been working in the field of preventive medicine for the past decade and co-founded two private medical clinics, Vibrance Medical Group in Beverly Hills, USA, and GenoSolutions in Cascais, Portugal.

Isabel has been honoured with Ernst And Young’s Entrepreneur of the Year Award, Canada’s Top 40 under 40 Award, Canada’s National iWAY Award presented by the Canadian Royal Bank and CANARIE Inc., the Women in Technology Award by Bell Mobility, the Canada-America Business Council Award, the University of Toronto’s Alumni of the Year Award, and the Maclean’s Honor Roll for Canadian Excellence.

The device, which Consumer Physics has launched a Kickstarter project for, would allow users to scan practically anything –foods, drinks, pills, plants, and more– and get detailed information on the object’s chemical makeup in just a few seconds.

It might sound like science fiction, but it’s actually built around an age-old method of materials analysis known as near-infrared spectroscopy. Basically, this process involves shining a near-infrared light onto the surface of a given material, which causes the molecules to vibrate and bounce back light in their own unique way. This reflected light is then collected and passed through a spectrometer (think of it like a prism) that separates the light out into all the different wavelengths it contains. By analyzing the unique optical signature of the scanned material, it’s possible to determine what it’s made out of.

Near IR-spectroscopy has been used by scientists for decades, but up until Scio, spectrometers were very large, and prohibitively expensive. To bring the technology out of the lab and into the hands of consumers, Consumer Physics has spent the past few years shrinking the technology down and making it easier to use. In addition to the tiny, keychain-sized scanner, the company also designed an accompanying smartphone app to help you make sense of the readings it takes.

It’s not just limited to food and drinks either. Technically, Scio can be used to determine the molecular makeup of anything except metals, so it has an extremely broad range of potential applications. Need to determine the CO2 content of your home-brewed beer? Want to know the ripeness of an avocado at the grocery store? Want to check to make sure the drink you left sitting at the bar hasn’t been tampered with? Scio could make that happen. Consumer Physics is even releasing a software development kit, so third-party developers will be able to create their own applications for the device.

Oddly enough, this isn’t the first time a device like this has hit the crowd-funding scene. You might remember a similar device called TellSpec from Indiegogo late last year. Both devices rely on molecular spectroscopy to scan foods — the difference is that Scio is actually past the R And D stage. 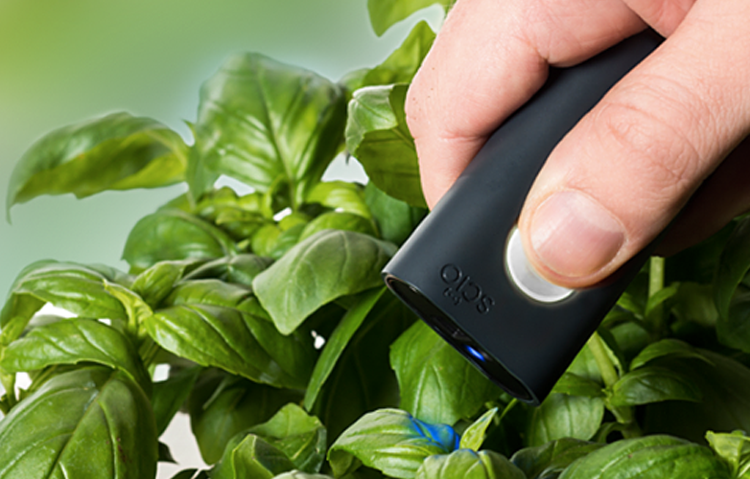 Consumer Physics has already developed multiple working prototypes, and will supposedly be ready to ship to early backers as soon as December of this year.

If you’re quick enough, you can lock down a developer kit right now for the early-bird price of $150, or pre-order the finished consumer version for $199. Head over to Kickstarter for more info.

If you’re quick enough, you can lock down a developer kit right now for the early-bird price of $150, or pre-order the finished consumer version for $199. Head over to Kickstarter for more info.

In addition to food apps, early apps will include those for plants (Does it need watering?) and medicine.

Consumer Physics, a company based in Tel Aviv, Israel and SCiO’s creator, suggests that the device’s future capabilities are only limited by our imagination.

Upcoming applications could include those for makeup, precious stones, leathers, “and even you or your pet!” according their Kickstarter FAQ.