Device Literally Tracks Employees As They Move Throughout The Office 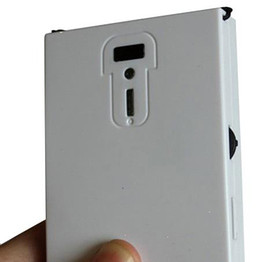 A few years ago when Bank of America Corp. wanted to study whether face time mattered among its call-center teams, the big bank asked about 90 workers to wear badges for a few weeks with tiny sensors to record their movements and the tone of their conversations. Device Literally Tracks Employees As They Move Throughout The Office

The data showed that the most productive workers belonged to close-knit teams and spoke frequently with their colleagues. So, to get more employees mingling, the bank scheduled workers for group breaks, rather than solo ones.

Some Insights Firms Got From Tracking Workers’ Movements:

* At Lunch, Size Matters: Researchers found that workers at one tech company who ate at tables designed for 12 were more productive than those who used tables for four.

* Togetherness Builds Teams: After a bank call center switched to group breaks, rather than solo ones, productivity rose at least 10%.

* More, But Smaller, Spaces: Sensor data at a consumer products company found that, on average, three or four people were meeting in rooms designed to hold eight to 10, so the firm carved out smaller meeting spaces. 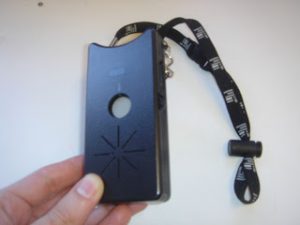 At Work: Diary of a Tracked Office:

My team at work isn’t a particularly chatty bunch. Nor do we take many coffee breaks.

Those were among the findings we gleaned after a group of WSJ colleagues and I spent a week wearing blinking badges that tracked our movement and speech patterns.

The sensors dangling on cords around our necks measured conversational volume, motion and proximity to other badge wearers.  I flew into New York from Austin, Texas, where I normally telecommute from a home office, to experience the badges in person. As I described in this story for Thursday’s Wall Street Journal, companies are using sensors like these to gather information about how workers actually do their jobs, in hopes of finding small changes that could make their teams more productive and collaborative.

Twenty colleagues volunteered to wear the badges during the work day–bathroom breaks included–for about a week.  A couple people dropped out, almost right away: One colleague said the sensor was too “clunky and uncomfortable to wear” and another executive said he lacked time to stop in the hallway every five seconds and explain why he was wearing a cassette-sized plastic badge.

My editor and I placed badges near coffee stations and conference rooms to track how often we congregated around these gathering spaces. (One colleague said he enjoyed the ” blink of recognition you get when approaching the coffee station. “)

There were some privacy and security concerns, though. Corporate security and our legal team, unaware that the badges were being used to research an article, requested that a device placed near an executive conference room be removed. 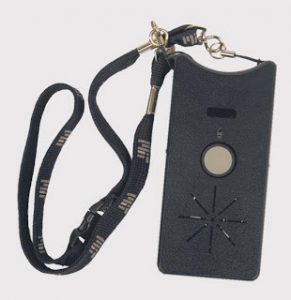 And several of us wondered what was actually going on inside the white badges.  ” Is it secretly recording everything I say ?” wondered Lauren Weber, who covers the Careers beat.  “I sometimes wondered if we really could trust what we were being told about this strange new technology.”

We were assured that the devices didn’t record actual speech. And individual data wasn’t shared with managers and colleagues. Instead, the data was aggregated and shared with the group.

Because we had only a few days of data, compared to the four-week period most companies use, our data set was limited. What we found was that my colleagues in the Management group, comprised of six reporters and editors, talked more often – and at higher volume – than a larger group of story editors on the Marketplace desk, but data showed that we chatted significantly less than our colleagues at CIO Journal, another group taking part in the study.

None of the members of my team, nor the other two groups wearing badges, hung out much around the coffee station, which could mean that we’re missing out important opportunities to schmooze and swap information with peers.

The individual badge data  showed that  I wasn’t particularly talkative in office conversations, but that I walked around a lot and met with a variety of people. (Makes sense,  as I was visiting from out of town.)

When asked what the information told her about the group’s productivity and collaboration, our editor said the group’s results seemed out of step with what she normally observed–internal meetings often have us roaming from floor to floor, and crosstalk among our desks is pretty frequent, but on busy weeks with tight deadlines, it makes sense that we’d be tethered closely to our desks.

I probably didn’t need to wear a blinking badge, tracking my every move, to tell me that we’re a pretty quiet, no-nonsense team. The badges might have jumped off the pages of science fiction, but the data they gleaned just confirmed our reality.

As Big Data becomes a fixture of office life, companies are turning to tracking devices to gather real-time information on how teams of employees work and interact. Sensors, worn on lanyards or placed on office furniture, record how often staffers get up from their desks, consult other teams and hold meetings.

Businesses say the data offer otherwise hard-to-glean insights about how workers do their jobs, and are using the information to make changes large and small, ranging from the timing of coffee breaks to how work groups are composed, to spur collaboration and productivity.

But there’s a fine line between Big Data and Big Brother, at least in the eyes of some employees, who might shudder at the idea of the boss tracking their every move. Sensor proponents, however, argue that smartphones and corporate ID badges already can transmit their owner’s location. In many cases, workers can opt out of participating in the sensor studies.

“Gathering big data about human behaviors can be a sensitive topic,” says Dave Lathrop, director of workspace futures and strategy at Steelcase Inc., which has used sensor data with its own employees.

Along with addressing privacy concerns, companies must also be ready to make sense of the data, managers say.

Last year, Cubist Pharmaceuticals Inc . did a sensor study of 30 sales and marketing employees at its Lexington, Mass., offices to learn about interactions between team members and various departments, says Eric Kimble, a Cubist executive.

The information was merged with email-traffic data, along with the results of weekly surveys in which employees rated how energetic and productive they felt.

Like Bank of America, Cubist discovered a correlation between higher productivity and face-to-face interactions. It found that social activity dropped off significantly during lunch time, as many employees retreated to their desks to check emails, rather than chatting with one another.

In response, the company decided to make its once-dingy cafeteria more inviting, improving the lighting and offering better food, to encourage workers to lunch together, instead of at their desks.

Cubist also scaled back to a lone coffee station and water cooler for the sales and marketing group, forcing employees to huddle and mix. It set a 3 p.m. daily coffee break, both to prop up sagging energy levels and to boost social interactions.

In such studies, clients say, workers typically get a report on their group’s overall interactions, with no names attached, though individuals get to see their own data.

The inventor says a handful of managers have wanted to see the data on an individual employee, but that clients must sign contracts and consent forms prohibiting them from doing so.

Individual data can be revealing, however: He says he can divine from a worker’s patterns of movement whether that employee is likely to leave the company, or score a promotion.

Ben Lin, an analyst at Cubist, says he didn’t find the badges creepy once his bosses explained how the data would be used. His own report showed he changed his tone and gestures based on his conversation partner. “Subconsciously, you mirror who you are talking to,” he says.

The inventor says his work with one client, a tech company, revealed that the size of a lunch table matters. Workers who ate at 12-person tables were more productive and collaborative than those who dined at tables with four seats. Data collected from sensors showed the larger lunch groups had more social interactions with teams across the company.

About 90% of workers at the 50 large and medium-size organizations that have done sensor studies with his firm agree to don the badges, which are intended to be worn the entire workday. (Bathroom breaks are optional.) Those who opt out can wear a dummy badge, which appears identical but doesn’t record or transmit data, he says.

Lewis Maltby, president of the National Workrights Institute, an employee advocacy group, says current sensing technologies don’t seem to violate employment laws. ” It’s not illegal to track your own employees inside your own building ,” he says, adding that the data could be helpful in improving firm and worker performance.

But he cautions that employers are likely to want data on individual workers. ” Not many service providers are going to refuse to give information to an employer that’s paying the bill ,” says Mr. Maltby. ” It would be very surprising if some provider doesn’t start giving employers data about individual employees when they ask for it. That’s not illegal. But do you really want your employers following around what you are doing? It’s a creepy way to work. ”

As a result, the company carved out more and smaller conference spaces designed for small groups. Space-availability complaints have gone down significantly since, Mr. Dietzen says.

Putting badges on workers is just the beginning of a broader trend, researchers say. As companies rethink their offices, many are looking into “smart buildings,” wired with technologies that show workers’ location in real time and suggest meetings with colleagues nearby.

To be sure, companies lured by the promise of fine-grained data on their workforces must figure out what to do with it.

The project generated a slew of graphs and spreadsheets, but about three months later, Mr. Kelly is still trying to extract relevant insights from the noise. It’s been a challenge, he says, “getting your head around all that data and what it means.”