Aeromobiles—aeros for short. That’s what I’ve decided to call the proliferating class of machines billed as flying cars, which is a lazy misnomer and misleading. Nobody is seriously proposing fully streetable automobiles that also fly, unless they mean to launch a Cadillac Escalade off a cliff. Even “car” is conceptually obsolete, descended from railroads and wheeled compartments. Cars shuffle along the X axis. Aeromobiles flit upon the Z. 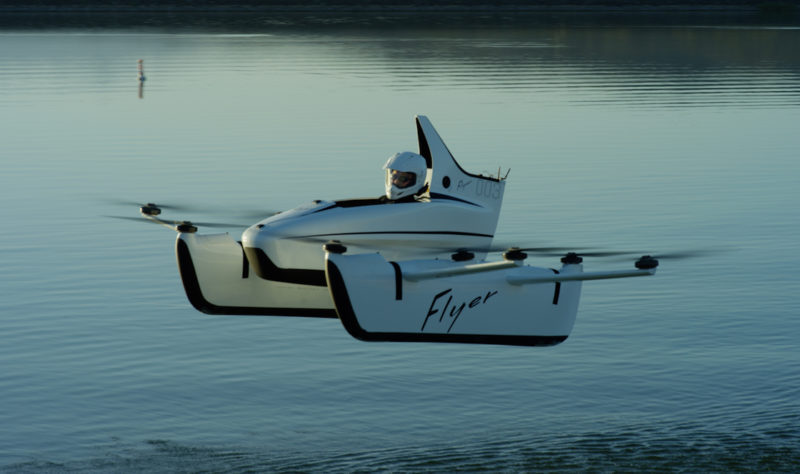 Also known as vertical-takeoff-and-landing vehicles, or VTOLs, these machines are poised to profoundly change our world, just as soon as the Federal Aviation Administration figures out what to call them, how to regulate them and where they should be allowed to fly.

Their technical forebears are, obviously, helicopters. But helicopters are “too noisy, inefficient, polluting and expensive for mass-scale use,” says the white paper for UberAir, the company’s aeromobile arm. “VTOL aircraft will make use of electric propulsion so they have zero operational emissions and will likely be quiet enough to operate in cities without disturbing the neighbors.”

Here’s a fun fact: Many of the self-declared pioneers in this space—including Airbus, Daimler and Rolls-Royce—envision autonomous air taxis carrying as many as six passengers. There will be no controls onboard. Emergency scenarios assume that a human pilot, operating the machine remotely, would take over from the computer.

So, going around the room, how does everybody feel about that? Quite apart from establishing Metropolis-style air corridors and etiquette for flying taxis (do Canada geese have the right of way?), widespread aeromobility will have to overcome the public’s compounded fears of aviation and artificial intelligence.

That’s why I’m here. As The Wall Street Journal’s car critic, I have been tasked with an experiential report from the frontier: I’m one of very few people to have flown in an aeromobile—in this case a recreational model called the Kitty Hawk Flyer. This single-seat, open-cockpit, 10-rotor machine is designed to give civilian guests—VC funders, policy makers and even car reviewers—a first taste of VTOL flight. Kitty Hawk’s management believes the aeromobile industry’s long play requires building grass-roots support. Actually, with only a 20-minute flight time, the Flyer isn’t good for much more than evangelizing.

“We call it a recreational flier,” says Todd Reichert, Kitty Hawk’s director of engineering. “But we are still thinking of things to do with [the design]. We want feedback and ideas from the people who come here.”

I suppress the urge to offer my first thought: leaf blower.

You would have to be very dull not to see the potential of aeromobility. Hell, just think what it will do to real estate values in the tri-state area. What if you could commute from the Hamptons to your Midtown office in 20 minutes, in a zero-emission, bat-out-of-hell aeromobile? What if an UberAir could pick you up in Santa Monica and drop you off on the slopes of Big Bear 30 minutes later? The commercial possibilities are beyond the dreams of avarice.

The FAA doesn’t have a path to certify air taxis, so in December 2016 the Cora development team, led by CEO Fred Reid, began a partnership with the New Zealand government. “The U.S. is seeing companies head elsewhere as gaining access to airspace becomes the major roadblock in fielding new technologies,” says Harrison Wolf, World Economic Forum Centre for the Fourth Industrial Revolution. Zipline—a drone company focused on delivering medical supplies to remote areas—chose to debut in Rwanda. Amazon’s Prime Air went to the U.K., and Volocopter, a Daimler-backed air-taxi venture, will deploy first in Dubai.

Kitty Hawk’s Flyer is also trying to stay below the FAA’s radar, so to speak. It weighs less than 254 pounds empty, so it qualifies as an ultralight aircraft, like a powered glider and paraglider. No pilot’s license or physical exam is required. To avoid entanglements of the overhead-power-line variety, Kitty Hawk has set up its base on the sunny shore of Lake Las Vegas in Nevada, a sort of training range and party spot, with a beached houseboat for a reception area and paddleboards sprinkled amid the Quonset-like hangars.

Kitty Hawk’s visiting greenhorns, myself included, are restricted to an area over the lake about the size of a football field. Theoretically, the Flyer’s pontoons permit water landing, but it seems as if the rotor wash would drown you in spray.

The Flyer’s carbon-fiber airframe is essentially a scaled-up version of a rotocopter, one of those unmanned drones buzzing every open field and greenway. The pod is underslung with two pontoons, each with three dorsal rotors. Four additional rotors whir at the ends of outriggers, for a total of 10 rotors (five counter-rotating to cancel out the twisting effects from the motors). Unlike a helicopter, which uses a mechanism to change the angle of the spinning blades, the Flyer’s rotors don’t change angle. A computer adjusts vehicle attitude by altering rotor speeds.

Please join me in my helmet. It’s 9:30 a.m. on a summer morning on the shore of Lake Las Vegas. Conditions: a seasonable 96 degrees under a blazing sun and a crystal-blue sky, with very little wind (very little wind is important; flights have been canceled for winds over 11 knots). I have been through a two-hour preflight training session, which was easy and fun, thanks to my instructor, Brittney Miculka.

Now I am waiting in the single-seat cockpit, up to my neck in carbon-fiber rotors. My heart is thumping against the Spanx-like shirt my trainers gave me, with a padded shield protecting the chest area, just in case a rotor blade goes rogue. The Flyer sits on a floating dock, which serves as a helipad. In my hands are two controls: the up-and-down thumb switch in my left, controlling altitude; the Nintendo-like joystick in my right, controlling direction. There is exactly zero instrumentation in the cockpit.

Over comms, I hear Brittney and the flight controllers, who are watching from a cylinderlike observation post on a rocky hill above the water. It takes about a minute to tick off the preflight safety checklist: “Helmet chin strap secured?” Me, in my best NASA test pilot: “That’s affirm, Brittney.”

A few more seconds pass while the flight-control and GPS systems initialize. These are long, quiet seconds sitting in an experimental aircraft in bondage underwear, hoping it all goes well. Brittney gives the all-clear and instructs me to hold the up-down switch up until the No. 1 rotor starts spinning, then release. The No. 1, at near right, starts spinning like an overturned electric lawn mower. BWAAAHHHHH… After a moment, the remaining nine rotors start whirring, a flock of mowers.

The Flyer grows loud, and I feel it getting light under my haunches, shivering in its own rotor wash. Brittney tells me to hold the elevator button up halfway. The Flyer’s props quicken, the aural pitch rises, and the Flyer lifts off the pad.

Now I’m flying—hovering, really—six feet above the lake, which is glass-smooth except for the zone directly under the machine, sparkling in rotor wash. In my helmet I hear Brittney’s OK to ascend to restricted operational altitude of 10 feet, the height of a basketball rim. Kitty Hawk’s strange oasis tilts downward as I rise above.

What is this sensation? The rotors’ downward thrust overcomes gravity, but there is no sense of teetering on a pillar of turbulence. The Flyer feels more stable than a helicopter hovering just off the ground and gives the impression that it’s suspended from above, anchored in the sky, rather than borne up from below. The craft’s stability, its centeredness, is the product of the dronelike flight-control stabilization software, balancing the vehicle in midair with millisecond adjustments to individual rotors’ thrust, according to the onboard accelerometers and inertial measurement unit.

After a quick debrief, I am sent on a second flight, on my own recognizance, free to buzz around the company’s corner of the lake at a top speed of 10 miles per hour. It doesn’t sound fast, but it’s enough that if the pilot were to make a too-sudden stop or turn it could destabilize the vehicle.

The Flyer’s software includes some strict parametric limits to avoid any unsafe vehicle movement and hot-dogging. I had hoped to dart and hover like a dragonfly. I felt more like a Japanese beetle.

“Don’t worry,” Reichert says. “It can be much more sporty than this. Come back next year, and we’ll let it off the chain.”

So, dear reader, think of me as your Laika, the Soviet space dog, except I landed safely. You want to know, is this new dimension of human movement fun? Is it scary? Will it work?

Yes, it is fun, but I will not be satisfied until we have pod-racer chariots howling above Manhattan. Anything short of that is a tragic waste of this technology. Is it scary? Not in the slightest. Honestly, the flying-machine cake feels pretty much baked. You couldn’t knock the Kitty Hawk Flyer out of the air with a 12-gauge. And besides, commercial vehicles will likely all have parachutes.

Do aeros seem like a good big-picture idea? All the research bots flying around the world seem to work well enough in principle, but the step change in aeromobility requires a better battery. Right now that looks like solid-state chemistry, predicted to have three to four times the energy density of lithium batteries. Futuristic aero visions like Aston Martin’s (see “The Aeromobile Fleet Takes Shape”) are designed around batteries they expect to have, not the ones they have in hand.

When is the future? Solid states are expected to be available within a decade. And 10 years seems about right for the FAA to get its regulatory act together.

Really, aeros already work like a charm. It’s only paper that keeps them grounded.

The ride-hailing giant plans to launch ride-share aeros in three cities: Dallas, Los Angeles and one more to be named. The company envisions rooftop aerodromes servicing a fleet of fixed-wing air taxis, carrying four passengers plus a pilot. UberAir predicts the cost of an aero-cab will be comparable to today’s UberX fares.

First Flight: The goal is to have ongoing demonstrator flights in the air by 2020 and commercial operations by 2023.

Aerospace giant Rolls-Royce Holdings PLC split from the motor car division decades ago. In July, the company, known for commercial jet engines, unveiled an electric vertical-takeoff-and-landing concept at the biennial Farnborough Air Show in England. The hybrid electric could carry five passengers 500 miles at speeds of up to 250 mph.

First Flight: Rolls-Royce is targeting the early 2020s to have commercial vehicles in the air.

Rolls-Royce Holdings PLC has joined forces with another old Brit car brand, Aston Martin, which unveiled its insanely sleek, sci-fi-tinged concept Volante in July. “No one can believe how serious all this is and how fast it’s coming,” says Simon Sproule, chief marketing officer for Aston Martin.

First Flight: Aston’s “sports car of the air” will take flight commercially no earlier than 2025, if then.

Lilium, a German aviation start-up, claims the title of first EVTOL jet. Its design features 36 electric jet engines arrayed in rows on moveable flaps on the wings and front canards. The flaps rotate to vertical for take off and landing and to horizontal for level flight. The designers claim a top speed of 300 kph (186 mph) and range of 300 km.

First Flight: Lilium will conduct its first manned test flight in 2019 and is targeting early 2020s for commercial operations.