A man strolled down the candy aisle of a grocery store in England last month, picked up a bar of chocolate and stashed it in his back pocket.

He wasn’t stealing. Specially equipped surveillance cameras were tracking both his body and the products he was taking off the shelves, to help him pay for them.

Tesco PLC, one of the world’s largest supermarket operators, demonstrated this technology recently to investors, labeling it as one of the retailer’s big ideas for making shopping at its physical stores more convenient.

Tesco is one of several grocers testing cashierless stores with cameras that track what shoppers pick, so they pay by simply walking out the door.

The retailers hope the technology—similar to that pioneered by Amazon.com Inc. in its Amazon Go stores in the U.S.—will allow them to cut costs and alleviate lines as they face an evolving threat from the e-commerce giant.

European efforts to scale up the technology in traditional stores—economically and without upsetting privacy advocates—will likely be closely watched in the U.S. Grocers in the U.K. often pioneer new technology like online delivery and self-payment kiosks that their American peers eventually adopt.

“People [in the U.S.] will definitely take note of Tesco’s experimentation, if only because it shows that someone outside of Amazon is now testing the concept,” said Chris Walton, a former Target Corp. executive and founder of consulting firm Red Archer Retail.

Tesco plans to open its self-styled “pick and go” or “frictionless shopping” store to the public next year after testing with employees. Eventually it wants to use the technology, developed by Israeli startup Trigo Vision, in more of its smaller grocery stores.

Tesco’s 4,000-square-foot test store uses 150 ceiling-mounted cameras to generate a three-dimensional view of products as they are taken off shelves. In its recent demo, Tesco’s system detected shoppers as they walked around the store.

It also identified a group of products when a person holding them stood in front of a screen, tallying up their total price. Tesco is considering identifying shoppers through an app or loyalty card when they enter the store and then charging their app when they leave.

Tesco told investors its method costs one-tenth of systems used by its competitors, partly because it only uses cameras. Amazon Go uses cameras and sensors to track what shoppers pick. Amazon customers scan a QR code at a gate when they enter a store, then walk out when finished.

French retail giant Carrefour SA is also running tests in at least two stores where cameras track what is taken off shelves and shoppers are charged automatically when they leave.

Carrefour is working with French startup Qopius Technology, whose cameras and software can read labels on products.

It used to be difficult to sell product-recognition technology to retailers, said Vasco Portugal, co-founder of Sensei Tech. “It seemed like crazy technology and it sounded like magic.” That changed after Amazon Go launched last year. “Immediately we started seeing a lot of appetite,” he said.

The Portuguese startup, which charges tens of thousands of dollars to fit out stores with the computing power equipment needed to track products, in addition to a monthly fee, said three European grocers are planning to roll out its system this year.

Israel’s biggest supermarket chain, Shufersal, plans to deploy similar technology across all its stores if its own trial works out. “The whole notion of waiting in line will vanish,” a spokesman said.

Retailers face some challenges with this technology. Customers may balk at having their movements tracked, though Tesco said the system used in its trial doesn’t recognize faces.

American grocery chains have typically been slower to adopt new technology than their peers across the Atlantic because the U.S. market is less competitive, said Bruno Monteyne, an analyst at Bernstein Research.

Despite initial excitement after Amazon Go launched, U.S. retailers have also faced concerns about excluding low-income shoppers who tend to pay with cash.

Lawmakers in several cities, including San Francisco, have been considering bans on cashless stores. U.S. retailers also operate many large stores, where tracking thousands of products all day long would be more expensive.

Walmart Inc. is testing artificial intelligence-enabled cameras in a store in New York that can recognize hundreds of products, but only to manage inventory levels.

The retailer plans to test its system on a 30,000-item “real-world” store that is nearly the size of a football field, but a spokesman said it wasn’t testing cameras for purchases.

Kroger last year launched a system that allows customers to scan and bag products as they shop and then pay by scanning a final bar code.

More Self-Checkout Is Coming, No Matter How Much You Hate It 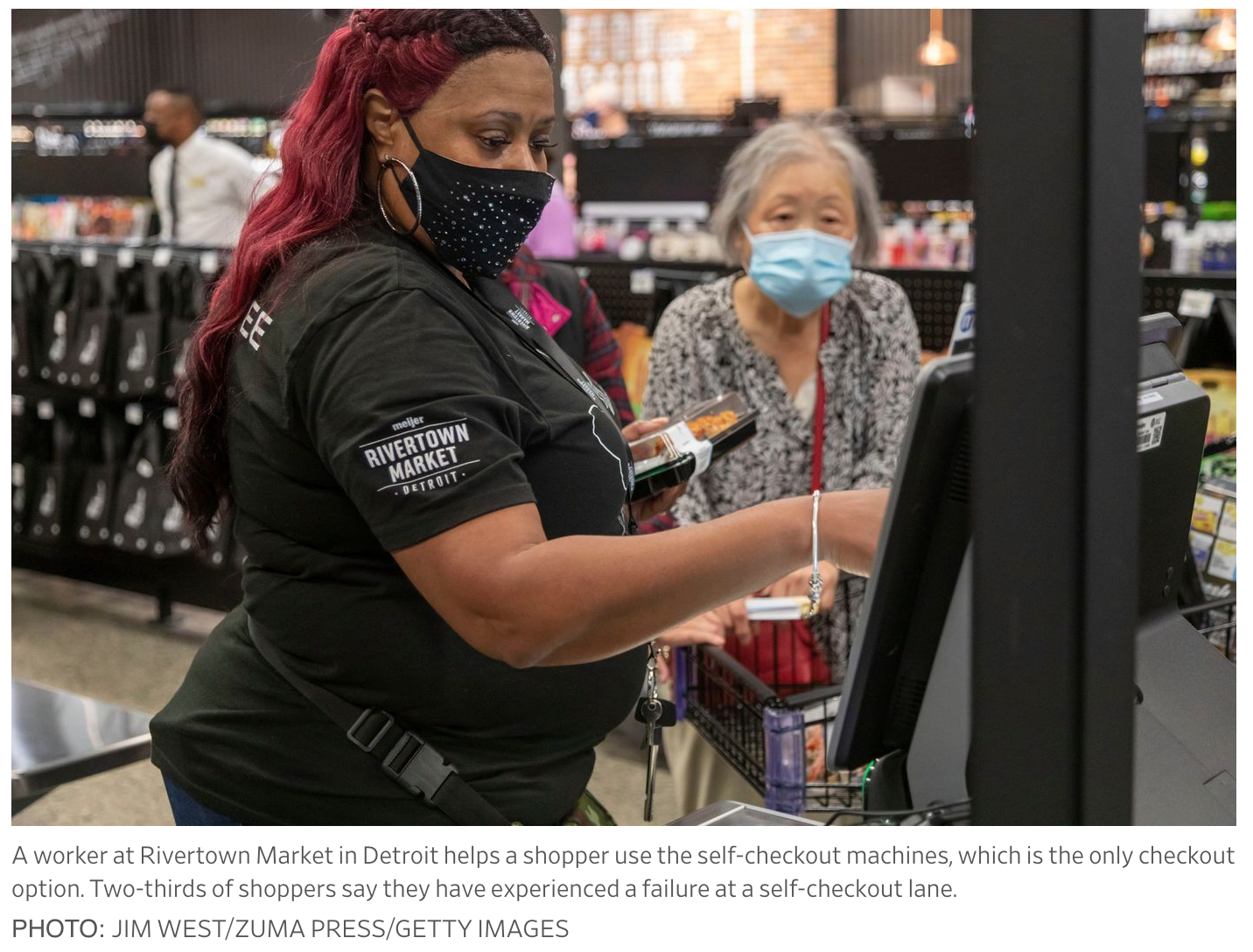 Grocery stores short on labor are increasingly relying on customers to ring themselves up. The transition isn’t always seamless.

The self-checkout line can drive shoppers nuts, from frustrations looking up produce to accidental double-scans.

In Chattanooga, Tenn., a flustered self-checkout experience and subsequent failure to double-bag led Tim Connon to lose half his Thanksgiving groceries to the parking-lot asphalt.

“There’s a lot of people out there who say the customers can just replace the workers,” he says. “That’s not necessarily true. I’m exhibit A.”

Despite bad vibes from some customers, automation at the supermarket has kicked into overdrive. More grocers installed the tech during the pandemic because of staffing issues and some customers’ fears about interacting with more humans than necessary.

While many are experimenting with new-age tech that aims to make the self-checkout process easier for shoppers, those upgrades are a long way from showing up at most local grocery stores.

Self-checkout is nearly twice as widespread as it was before the pandemic, representing 30% of all grocery store transactions in 2021, according to an FMI-The Food Industry Association report released last week.

Chains including Walmart Inc., the Kroger Co., Dollar General Corp. and Albertsons Cos. are piloting stores that offer only self-checkout lanes. Costco Wholesale Corp. recently brought the technology back to some of its locations after removing it in 2013.

Target Corp. has ramped up its self-checkout offerings in recent years and now offers the tech in nearly all of its stores nationwide “to give more guests a fast and autonomous alternative,” a Target spokeswoman says. The company says it has increased staff at the same time.

Southeastern Grocers, which owns Fresco y Más, Harveys Supermarket and Winn-Dixie, has the machines in more than half of its stores. “Including self-checkouts in our stores is not due to labor concerns, but as an added benefit for our customers. Due to their positive response, we will continue to install them,” a spokeswoman says.

With the turnover rate for grocery store employees in 2021 at 48%, down slightly from a record high in the prior year, according to FMI, industry experts believe grocers may have no choice but to expand their use in the coming months.

He adds that self-checkout machines, which cost anywhere from $14,000 to $40,000 to install, pay for themselves quickly. Stores usually only have one or two workers for every five to 10 machines, instead of one cashier per lane.

Many shoppers wish that ratio were smaller.

Two-thirds of shoppers say they have experienced a failure at a self-checkout lane, according to a 2021 survey of 1,000 people by technology company Raydiant.

Mr. Connon of Chattanooga says he often has no choice but to use self-checkout at the Walmart where he usually buys groceries. So few cashier lanes are open when he goes in these days, he says, that lines often snake down half the store.

The life insurance agency owner, 31, says he doesn’t mind the machines when he only has a few items.

But during his pre-Thanksgiving shop last November he got frazzled by looking up half a dozen different types of produce and tracking down an employee to check his ID for wine. He forgot to double the overstuffed bags.

Halfway to his car, one bag broke in the parking lot, shattering a bottle of wine and a jar of jam, and sending salad ingredients and a jar of peanut butter flying. He says he would find self-checkout more manageable if there were always employees near to offer assistance.

In Dallas, ​​Darren Grubb’s recent trip to Central Market took a turn for the worse when his 10-year-old son made the self-checkout decision for him. “He just grabbed a loaf of bread and ran over there,” Mr. Grubb says.

The second item his son scanned, a package of fresh fish, rang up twice. Mr. Grubb flagged down an employee to void the purchase and decided to take over.

He made the same mistake on a carton of milk. By the fourth time he needed a double-scanned item voided, he had made fast friends with the grocery store employee overseeing the self-checkout area. “I haven’t let my son come grocery shopping with me since,” he jokes.

A Kroger store near Atlanta unveiled the first self-checkout machine back in 1986, industry analysts say. The technology hasn’t changed much since, says Jim Hertel, a food-retail analyst with Inmar Intelligence.

Grocery stores once thought that self-checkout machines would be as convenient to use, and widely adopted, as ATMs. “Then they realized that ringing up groceries was a lot more complicated,” Mr. Hertel says.

The machines were so widely avoided in the beginning, Mr. Hertel says, that some stores decided to dump them. Then the pandemic, and the resulting fears some shoppers had about interacting with other shoppers in line and with the cashier, led more stores to start offering them again. Now, amid the labor shortage, customers are stuck with self-checkout, he says.

Futuristic technology that promises to improve the experience hasn’t yet been adopted widely, Mr. Baum of FMI says, but could become more prevalent in the coming years.

Smart carts that tally each item as you shop are now available at 3% of stores, FMI reports, and 19% of stores say they are planning to roll out the technology in 2022.

“It’s kind of expensive, and there are all sorts of issues around physics and tech that have to mature before you see more of it,” Mr. Baum of FMI says.

Texas-based chain H-E-B is testing a checkout device that scans an entire basket at once in a handful of its locations.

Completely cashierless stores, meanwhile, still only make up 1% of grocery store retailers, down from 4% in 2020, according to FMI. (About 8% say they plan to try the tech in 2022.)

The first Whole Foods that eschews checkout altogether for “Just Walk Out” technology that rings items up as you’re putting them into your cart opened in March in Washington, D.C. But Mr. Hertel thinks it will be a while before we see more of them.

Buying enough of the lasers the stores rely on to see what’s in your cart is expensive, he says. Amazon Go stores are tiny (about 2,000 square feet) compared with a 50,000-square-foot grocery store, leaving more room for dead zones where lasers can’t reach.

“I think the retailers who are really smart about it will invest in finally improving the consumer experience,” Mr. Hertel says.