Living with housemates is challenging—and it doesn’t get easier with age; ‘not in my house.’ ‘People of Similiar Sensibilities Sharing Living Quarters’

Rika Mead got divorced a few years back, but didn’t want to give up the dream home she’d bought outside Denver. So she forged a solution she hadn’t considered in decades: She got a roommate.

Ms. Mead, 71 years old, has honed her criteria for cohabitants since then. A housemate may not own dogs, but must love Ms. Mead’s two dogs, Bindi and Baku. They must not try to convert her to their religion. (It’s happened.) And while Ms. Mead is no prude, she’s at a point in life where men aren’t welcome overnight. “I want my housemate to get laid from here to Tuscany,” she said. “But not in my house.”

Living with housemates is challenging at any time. It doesn’t get easier with age. Laundry is still an issue. So is music.

Demographic and economic shifts are reshaping what the golden years look like for baby boomers. Many are realizing they haven’t saved enough for retirement. They are less likely to be married than in years past. At the same time, a historic shortage of homes is pushing up housing costs.

Ms. Mead acknowledges her house rules would never fly if she were looking for a housemate in her 20s. But she has spent years developing her own habits and is less willing to make compromises on certain rules. Plus, the stuff she owns now is “a heck of a lot nicer,” she said. “There’s more to lose.”

Kathy Ryan, 64, said she opened her home in Thornton, Colo., to a housemate she found on Craigslist, who then lied about how many cats she was bringing (three, not two) and filled the basement with a hoard of knickknacks, including a doll carriage and a dress she’d last worn when she was 7. When Ms. Ryan asked her to please stop running small loads of laundry on the extra-large setting, the housemate insisted Ms. Ryan explain herself to the housemate’s therapist. Ms. Ryan eventually told her she had to leave.

Still, Ms. Ryan, who teaches college math online, has enjoyed other roommates since then. “My lesson is, try to go with someone you already know,” she said.

Housemates Karen Bush, 70, and Louise Machinist, 72, share a condo in Sarasota, Fla., but sometimes have aesthetic differences. To avoid hurt feelings over disagreements about furniture or artwork, they developed a euphemism for when they disliked each other’s choices: PSI, for “Personal Space Item.” Ms. Machinist’s drop-leaf table got PSI-ed to her room, for instance, as did a painting by Ms. Bush’s mother. “It’s great,” Ms. Machinist said, “but the purple magnolias wouldn’t be great in our pale green walled living room.”

About 16% of people 50 and older said they live in a shared household, up from 2% four years ago, according to a recent survey whose full results will be released in coming weeks by AARP. Last year, 1.9 million U.S. households headed by a person 50 or older included a housemate, roommate, boarder or other nonrelative, according to census data analyzed by Veritas Urbis Economics LLC, which provides consulting to developers and home builders. 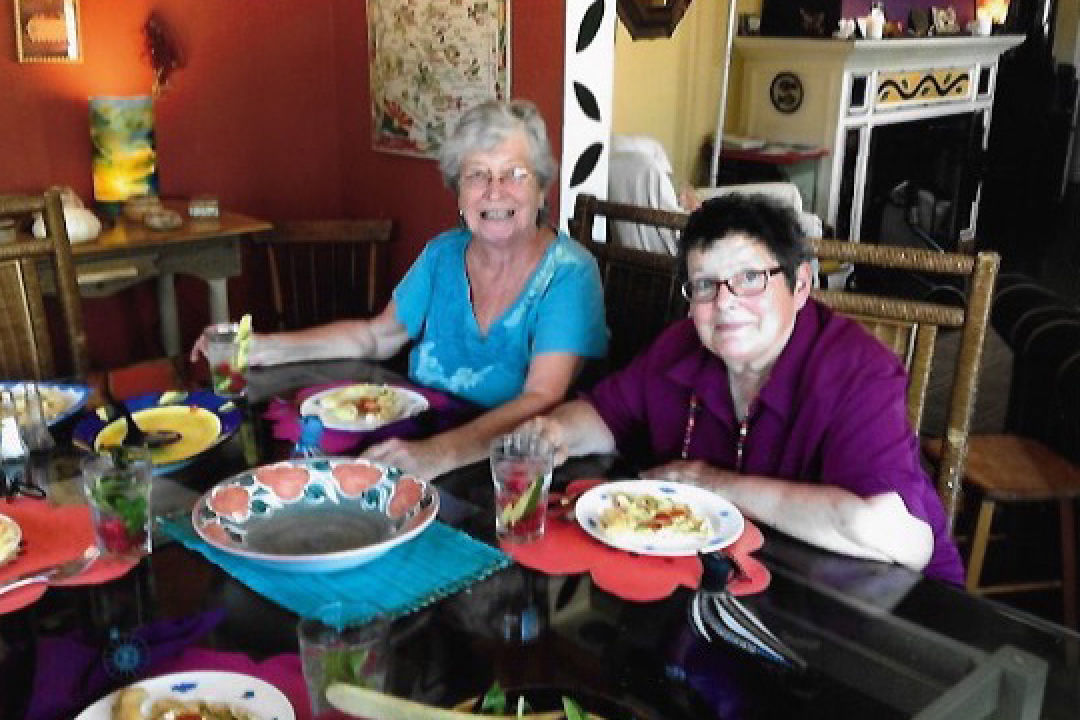 Sharon Kha, 74, and Deborah Knox, 73, love being roommates but cringe at the term, which they think sounds too juvenile. They instead gave themselves the moniker “POSSSLQ,” (pronounced “possle-cue”) short for People of Similar Sensibilities Sharing Living Quarters. It’s a nod to a former Census Bureau designation for unmarried couples, “Persons of the Opposite Sex Sharing Living Quarters.” 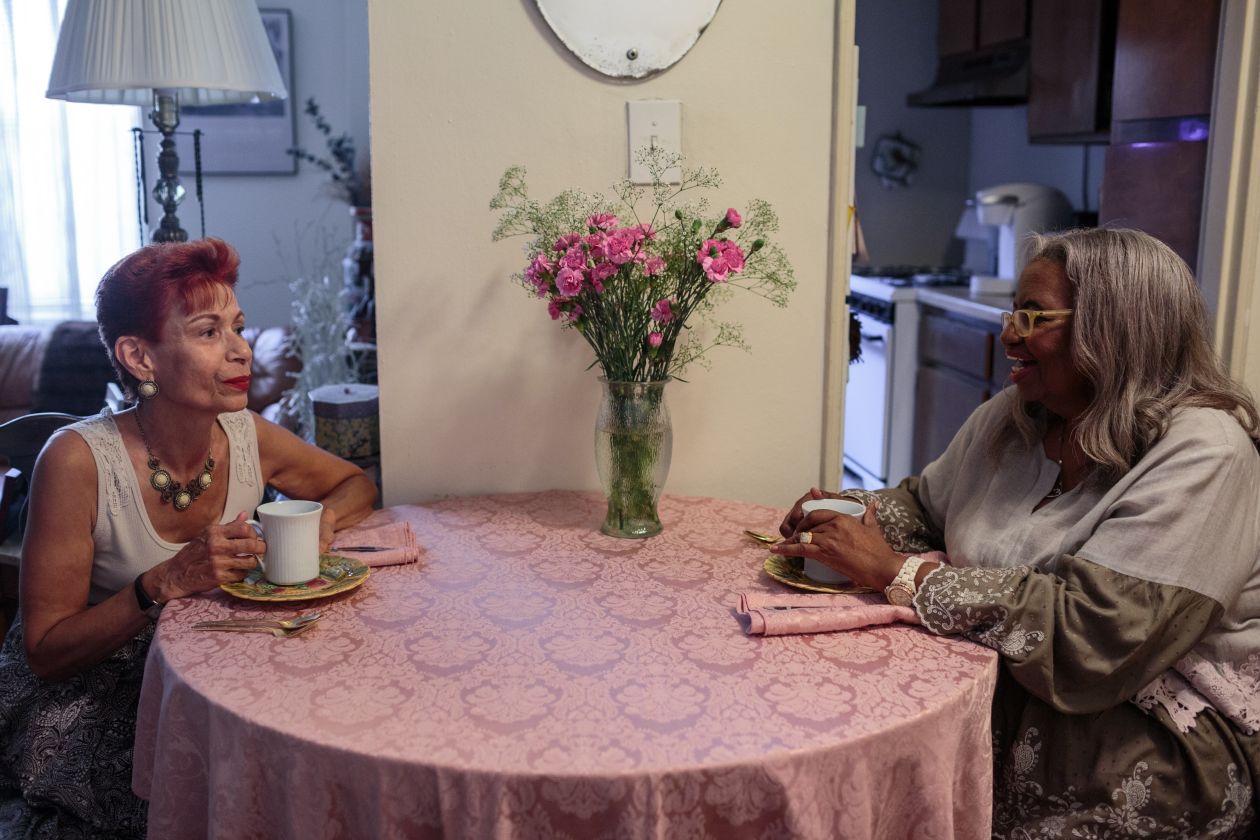 The two women started living together in Tucson, Ariz., a couple of years ago, because Ms. Kha needed help at home and Ms. Knox needed to save money. They weren’t sure they wanted to be POSSSLQs, but decided to try it after running into each other at a workshop on end-of-life planning. These days, “we are less interested in end-of-life planning and more interested in living life,” Ms. Kha said.

Housemates of a certain age can also find each other on websites, including Roommates4Boomers and Let’s Share Housing. The nonprofit New York Foundation for Senior Citizens matched Janice Raiford, 69, and Lillian Otero, 66.

Ms. Raiford decided to get a housemate to help preserve her retirement savings, though she had to persuade her mother and her adult daughter that she wasn’t crazy for doing so after some two decades of living alone. “I was very settled,” said Ms. Raiford.

The two women have been sharing a home in Queens for two years and most of their disagreements are slight. Ms. Raiford likes R&B— Aretha Franklin, Nina Simone and Beyonce—and doesn’t share her roommate’s affinity for rap. Ms. Otero is partial to Jay-Z and 2 Chainz. She keeps the peace by listening with headphones.

One head-scratcher, say shared-housing advocates, is the lack of interest from men. Theories as to why vary between two poles: Men prefer to be alone, and men can’t admit they don’t want to be alone.

Annamarie Pluhar, who runs a nonprofit called Sharing Housing Inc., hosted a recent workshop that attracted 26 women and two men. She thinks the gap is partly because women live longer and have less in savings because of pay inequality. “The other thing is, we women are more able to see ourselves creating a companionable home that can be shared,” Ms. Pluhar said.

“People have said to me, ‘I want a ‘Golden Girls’ relationship,” Ms. Pluhar said, referring to the popular 80s-era TV sitcom about four older women sharing a home in Miami. “When I first started working on this, I tried to stay away from using that. But I’m giving up. It’s a cultural reference.”

Hope Dietsch, a 75-year-old former accountant and baker who lives on Roosevelt Island in New York City, is an exception who has had several male roommates. And while she’s open to whipping up extra blueberry pancakes for them, she keeps a friendly distance. “We cannot talk about everything,” Ms. Dietsch said, “like childbirth.”

Sometimes, the secret to living with a roommate at an unexpected period of life is embracing however it turns out. Michele Fiasca, 66, had a housemate a few years back who couldn’t seem to pay rent but did procure wonderful vintage clothes for Ms. Fiasca, who runs a website that connects senior roommates in Oregon and Washington state.

Ms. Fiasca, who doesn’t like to shop, was more pleased than bothered. “I still get compliments on all the things she picked out for me,” she said.