Marketing 101: Not All Hispanics Are Alike

South Americans, Puerto Ricans and Cubans are settling among the existing U.S. population more readily than Mexicans, the nation’s largest Hispanic group, a trend with implications for politics, the economy and other areas of daily life. Marketing 101: Not All Hispanics Are Alike

In another finding of a study of U.S. Hispanics, the number of Hondurans, Guatemalans and others has been growing more rapidly than Mexicans, who still make up six in 10 U.S. Hispanics, since 1990. In all, 50.5 million U.S. residents trace their origin to Spanish-speaking countries.
South Americans, including Argentines and Venezuelans, have the highest levels of education and are the least segregated from other ethnic groups in the U.S ., even if they are more recent arrivals, according to the study.

Every group except Mexicans has experienced a substantial decline in residential segregation from whites since 1990, according to the most common measure of segregation, the ” dissimilarity index ,” which measures the distribution of two groups in a neighborhood and how much one group is over- or under-represented in relation to the other.

“One would have thought that the newer groups, which are faster-growing, would be the ones maintaining boundaries and that Mexicans, with so many second and later generations, would be dispersing,” said John Logan, co-author of the report, “Hispanics in the United States: Not Only Mexicans.”

Instead, “some strong boundaries faced by smaller groups seem to be breaking down over time,” said Mr. Logan. His paper is part of Brown University’s U.S. 2010 Project, a demographic-research series based on analysis of census data about different Hispanic groups, including those who are immigrants and those born in the U.S. 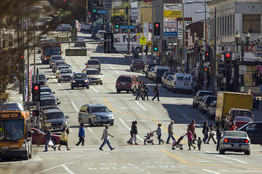 Four decades ago, the federal government identified as ” Hispanic ” the surging mass of people with origins in Latin America and the Caribbean. They are a multiracial, multiethnic and multicultural lot: Argentines often descend from white Italians and Spaniards; Dominicans are often black. Politicians and marketers who wish to reach out to Hispanics need to be aware of the major differences among them, experts say, because they aren’t a monolith.

“Shared language is important, but it’s also important to be aware that most Mexicans are not immigrants, South Americans have relatively high education and income, and that many of the least-advantaged Hispanics are the rapidly growing number of immigrants from Central America,” Mr. Logan said.

To be sure, lumping the fast-growing group into one bloc has helped Latinos emerge as a political force. Since eclipsing African-Americans to become the nation’s largest minority around 2000, the group has kept expanding, more than doubling in size since 1990.

There were nearly 32 million Mexicans in the U.S. in 2010, according to the census. The country also was home to four million Central Americans, triple the number in 1990, and 2.8 million South Americans, including Colombians, Ecuadorians and Brazilians, up from about a million two decades earlier.

The long-term political implications of these trends aren’t entirely clear. “Today, the non-Mexican groups are still relatively small and have a relatively high share of noncitizens,” said Louis DeSipio, a professor of political science at the University of California, Irvine. “As the population ages and has native-born kids, the meaning of Latino will probably have to become more diffuse.”

The study found that Cubans and South Americans reside in neighborhoods where the median household income and share of those who are college-educated, at 30%, is on a par with neighborhoods inhabited by whites.

In many cities it can be harder for Mexicans to integrate with other groups given that they are so numerous. Their relatively high residential segregation also is partly attributable to their low socioeconomic status, said Daniel Cornfield, a Vanderbilt University professor who studies immigration. The share of Mexicans who have a bachelor’s degree, 7.3%, is lower than that of several other Hispanic groups, according to the census.

Non-Mexican Hispanics have integrated with whites by departing areas where they were highly concentrated.

Alba Marrero grew up in a Puerto Rican enclave of Brooklyn, N.Y. Today, she lives in Los Angeles, where Puerto Ricans like her have settled in recent years. “There are a lot of us here,” said Ms. Marrero, a public defender. “We’re just not concentrated in one area.”

Latinos moving to largely white areas are boosting such integration. Guatemalans work on dairy farms in the Northeast that abut the Canadian border and in meatpacking plants in the Midwest. Patricia Vargas Cooper, a native of Chile, lives in Woodland Hills, a mainly-white upper-class area of Los Angeles’s San Fernando Valley. Her daughter, who was raised there, is a “proud Valley girl,” said the Spanish teacher.

Distance from country of origin plays a role. South Americans are less likely to be economic migrants–they often are in the U.S. to further their education or flee unrest–than Mexican and Central Americans, who usually reach the U.S. by land.

“There are lots of poor people in Argentina,” said Jacob Vigdor, a Duke University immigration scholar. “But to get here all the way from the cone of South America, you need to have a certain income level.”

All told, there is a long way to go before Latinos are fully incorporated into mainstream society. “Only South Americans seem to be reaching what I would call modest integration,” said Mr. Logan.