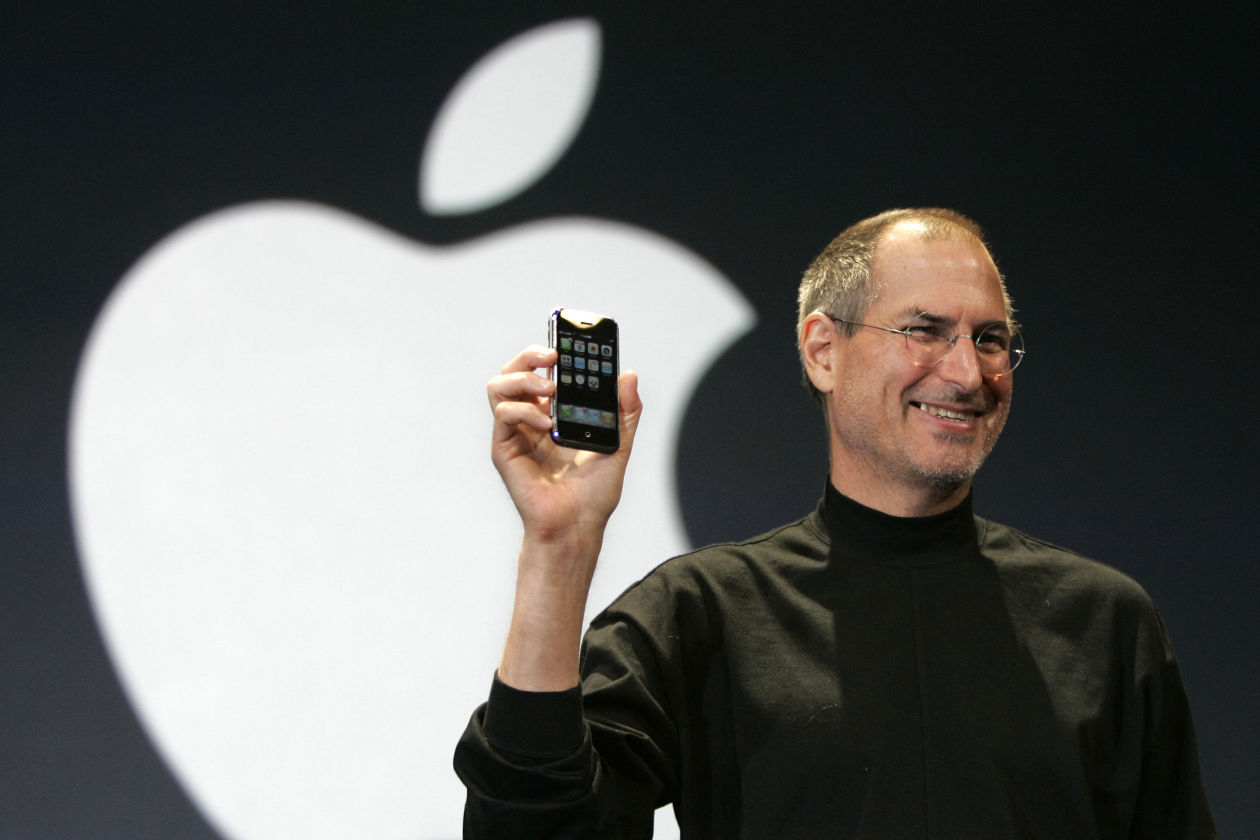 When Apple Ceo Steve Jobs Demonstrated The First Iphone At The Macworld Expo In 2007, The Audience Was Amazed By Features We Consider Mundane Just 12 Years Later.

Amit Rajput, who runs a counter selling iPhones in a busy electronics shop here, cuts a lonely figure. He is lucky to sell one device a day, compared with the 10 or more smartphones his colleagues at desks for Samsung Electronics Co. , Nokia Corp. and China’s Oppo sell daily in the same store.

As customers walk past his display, he recalls a different time in 2013 when he sold as many as 80 iPhones a day. Now most people want to pay less than $300 for their devices—a fraction of what Apple Inc.’s newer models cost.

Smartphone makers, facing sputtering growth in the rest of the world, have looked to India to make up the difference. With 1.3 billion consumers, the country is the world’s biggest untapped tech market. Just 24% of Indians own smartphones, and the number of users is growing faster than in any other country, according to research firm eMarketer.

How has that worked out for one of America’s most valuable companies?

The number of iPhones shipped in India has fallen 40% so far this year compared with 2017, and Apple’s market share there has dropped to about 1% from about 2%, research firm Canalys estimates. The Cupertino, Calif., company posted revenues of $1.8 billion in India this fiscal year. That is less than half of what executives had once hoped to capture, said a person familiar with its targets.

“It’s been a rout,” said Ishan Dutt, an analyst at Canalys.

Chief Executive Tim Cook has gone from touting India’s potential to seldom mentioning it now. He has said he remains bullish about the company’s long-term prospects, despite challenges including a weak currency.

“I sort of view these as speed bumps along a very long journey,” he told analysts last month. “The long term is, I think is very, very strong.”

At the heart of the issue is Apple’s reluctance to change its traditional business model for selling the iPhone. Rather than make a range of handsets, it has prioritized a limited number of coveted products, sold at high prices—a strategy that revived the company after near bankruptcy in 1997 and helped make it the first U.S. public company to reach a $1 trillion valuation. The iPhone’s margins have been the basis for three-quarters of the company’s gross profit in recent years, analysts say.

Whether the company can get its phones into the pockets of the world’s next billion smartphone buyers—in India as well as in other emerging markets, such as Indonesia and parts of Latin America—will help determine how much the company will grow in the coming decade.

Even after reporting record annual revenue Nov. 1 on the back of higher iPhone starting prices of nearly $1,000, the company’s shares have fallen more than 25% since early November. The declines followed reductions in planned iPhone production and analysts’ reports that consumer interest in new iPhones is waning.

In price-sensitive markets such as India or African countries, most people buy phones outright and choose pay-as-you-go plans. In the U.S. and many European markets, wireless carriers lower the cost of devices for customers in exchange for multiyear contracts.

The iPhone’s software features, like iMessage and AirDrop photo sharing, aren’t as big a draw for emerging-markets buyers, who often use Facebook and its WhatsApp messaging service to connect with friends and consume news and other content.

Apple has traditionally offered two new smartphones per release, allowing it to generate tremendous profit with big volumes and limited variability. The company has been reluctant to make software and hardware changes, because those adjustments make its operations more complex, increasing work hours and other costs—and threatening profit margins.

As sales have slowed, Apple has begun releasing three new models and adjusting hardware and software with market-specific features aimed at broadening the iPhone’s appeal.

This year it added a dual-SIM-card feature popular in China, where users often prefer to have separate work and personal phone numbers on the same device. A year earlier, Apple made China-specific software updates, adding support for QR codes used for mobile payments.

Apple is up against more daunting issues in India, which will have an estimated 39 million new smartphone owners this year, according to eMarketer. More than 75% of the smartphones sold in the country cost less than $250 and 95% cost less than $500, analysts estimate. Most sales come from local, unaffiliated shops in the countryside, where the majority of Indians live.

Among Apple’s current lineup, its lowest-priced phone in India is the iPhone 7, which typically costs around $550. Older models the company has phased out are still available in India at lower prices, including the iPhone SE for about $250.

The company hasn’t had the successes of fellow U.S. tech giants, who have found ways to claim some of India’s hundreds of millions of new consumers. Amazon.com Inc. has become a leading e-commerce player in the country. Alphabet Inc.’s Google and Facebook Inc. dominate online advertising. Netflix Inc. and Match Group Inc.’s Tinder are already among the biggest earning apps.

Apple brought the iPhone to India in 2008, a year after it was introduced in the U.S. The company initially targeted the device at wealthy Indians through high-end retail stores and later broadened its reach to the middle class through monthly payment plans, people familiar with the business said.

As the iPhone became one of the most popular smartphones in the world, Apple’s annual sales in India rose to more than $1 billion by 2015, from about $100 million in 2011, these people said.

That caught the attention of Mr. Cook and Cupertino executives. They wanted to make India the company’s next growth market and created a five-year plan to increase Apple’s sales to $5 billion by 2020, according to those people.

Mr. Cook traveled to India in 2016 to meet with Prime Minister Narendra Modi and pose for photos with Bollywood stars. He visited iPhone retailers and a Hindu temple, donning a traditional scarf and a type of orange mark on his forehead that is typically applied for auspicious purposes.

One factor holding Apple back in India, Mr. Cook said, was the lack of high-speed 4G connectivity, which made viewing content such as video less compelling on iPhones.

In a town hall meeting with Apple staff during his India visit, Mr. Cook said “India is different and we need to treat it differently,” according to a person familiar with the matter.

Apple tapped Sanjay Kaul to lead that effort, promoting him to country manager from head of the iPhone business in India. Mr. Kaul, who joined Apple in 2011 from Research In Motion Ltd., maker of BlackBerry devices, knew how to navigate India’s unique sales market, where manufacturers funnel devices through distributors to mom-and-pop stores that sell some two-thirds of all handsets. Mr. Kaul declined to comment.

To deliver on Cupertino’s ambitious sales targets, he increased Apple’s network of distributors and sought to expand the iPhone’s reach from the nation’s biggest cities, such as New Delhi and Mumbai, to smaller, growing metropolises, said the people familiar with the matter.

The company coupled that push with steep discounts on iPhones to juice sales, the people said. Yet even Apple’s least expensive new devices were out of reach of all but the wealthiest Indians. Distributors wound up holding excess inventory they couldn’t sell.

Meanwhile, competitors like China’s OnePlus, Xiaomi Corp. —sometimes called “the Apple of China”—and BBK Electronics Corp.’s Oppo and Vivo flooded India with smartphones, many of which cost less than $200. Some signed on Bollywood and cricket stars, among India’s biggest celebrities, to promote their products.

OnePlus now has a 30% share of the premium segment, according to research firm Counterpoint Technologies. Apple has 25% of the same segment.

One cost advantage competitors have over Apple is the ability to manufacture their devices in India. Doing so helps them avoid a tariff that adds 20% to the already high price of iPhones imported from China.

Apple moved to catch up to rivals last year by setting up a plant near the southern city of Bangalore to assemble its cheapest iPhone model, the SE. The company sought concessions on the taxes that component makers pay to import materials, according to government officials.

Apple has also sought to open its first official, company-owned retail store in India, people familiar with the talks said. Such stores have been critical in promoting the brand around the world. But India requires single-brand retailers that are more than 51% foreign-owned to buy at least 30% of their manufacturing materials from Indian vendors—a hurdle that’s hard for Apple to clear given most smartphone components are made elsewhere in Asia.

Government officials felt the company wasn’t focused enough on investing in local production and bringing high-tech jobs to India, according to a person familiar with the matter. Talks stalled. The request for concessions is pending and Apple has been unable to move ahead with a store. Opening its own stores remains Apple executives’ top request in ongoing discussions with policy makers, according to a government official.

A government spokeswoman didn’t respond to requests for comment.

Mr. Cook told analysts last month that discussions with the government have been productive.

“I fully expect that, at some point, they will agree to allow us to bring our stores into the country,” he said. He also said Apple has communicated with India’s leaders about the country’s import duties.

As government relations soured, the push to sell more devices ran out of steam. Some distributors were angered that they were being undercut on price by upstart online shopping websites, according to a person familiar with the matter.

Mr. Kaul left Apple in late 2017 and was replaced by Michel Coulomb, who had overseen South Asia operations—including Singapore, a successful market. He focused on repairing Apple’s brand by trimming the number of distributors and returning to Apple’s past strategy of targeting wealthier Indians through third-party stores in high-end shopping malls, according to people familiar with his strategy.

The company plans to replace Mr. Coulomb with a former Nokia executive, Ashish Chowdhary, in January.