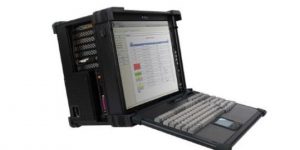 French technology company is offloading its business that sells Internet-interception equipment, a move that comes six months after it became public that Moammar Gadhafi’s regime had been using the technology to spy on Libyans. Internet-Interception Equipment: Targets Emails, Online Chats and Facebook Messages Using Massive Interception

The company said it had “signed an exclusivity agreement with a view to negotiating the sale of the activities” related to its interception product. The company declined to identify the buyer.

The system, which was developed for Libya after signing a 2007 contract with the regime there, allowed Gadhafi’s security services to intercept emails, online chats and Facebook messages of targets. The sophisticated electronic spying by the Gadhafi government continued as Libya ‘s revolution kicked off in February of last year.

A surveillance center in Tripoli provided clear evidence of foreign companies’ cooperation in the repression of Libyans under Col. Moammar Gadhafi’s rule.

The existence of a surveillance center in Tripoli outfitted with the equipment was first reported last August. According to surveillance files reviewed, the regime wielded the snooping technology against Libyan dissidents, journalists, human-rights campaigners and everyday enemies of the state.

The company said the business falls outside its core remit. “This activity is nonstrategic for the our business model which wishes to focus…its expertise on mission-critical electronic systems and, in particular, on areas involving the protection of personnel and national security,” the company said in a statement, referring to the product.

The business represents less than 0.5% of it’s overall revenue, the statement said. The company reported revenue of €1.3 billion ($1.71 billion) in 2011, suggesting sales from the business would have been less than €65 million in that year.

A significant chunk of it’s revenue streams for the system is thought to have come from Arab and African governments. An spokeswoman couldn’t be reached for comment on, but last year declined to comment on specific contracts outside of Libya .

The system in Libya was switched off last year after Moammar Gadhafi and his allies began losing grip on the country. It remained offline as of the start of 2012. The payment structure of the contract with the former regime is unclear. It’s also unclear if the company is still owed money.

In the past, both the company and the buyer have defended the decision to sell the interception system to Gadhafi.

“The contract was concluded at a time when the international community was in the process of diplomatic rapprochement with Libya , which was looking to fight against terrorism and acts perpetrated by al Qaeda,” said in September.

It’s unknown if the likely new owner will sell the interception technology to repressive governments or service potentially controversial existing contracts that may exist outside of Libya .

It’s dealings in Libya became the subject of attention after it was discovered the abandoned spy center in Tripoli where agents working for Gadhafi sat in an open-plan office and operated the system to sift through the online communications of Libyan targets. The technology intercepted the flow of traffic from Libya ‘s main Internet service provider and harvested information from the stream using a method known as deep-packet inspection.

The spy center was lined with posters and English-language training manuals stamped with the name (deleted). One poster hanging in the center, which described the system, said: “Whereas many Internet interception systems carry out basic filtering on IP address and extract only those communications from the global flow (Lawful Interception), Our Interception system analyses and stores all the communications from the monitored link (Massive interception).”

Lawmakers from the opposition Socialist Party in France have called for a parliamentary inquiry into any role the French government might have played in facilitating such a sale of equipment to Libya . The request is still making its way through the government there.

Human-rights groups have filed court complaints asking French prosecutors to investigate for what the groups call possible violations of export rules and complicity in torture. Those complaints are pending.

How Do I Know If I’ve Been Bugged?