As the 65 and over population grows, urban planners are looking for new approaches to serve the booming demographic. Five Innovative Ways Cities Are Improving Life For Seniors (#GotBitcoin?)

Cities are trying to make life better for their older residents. 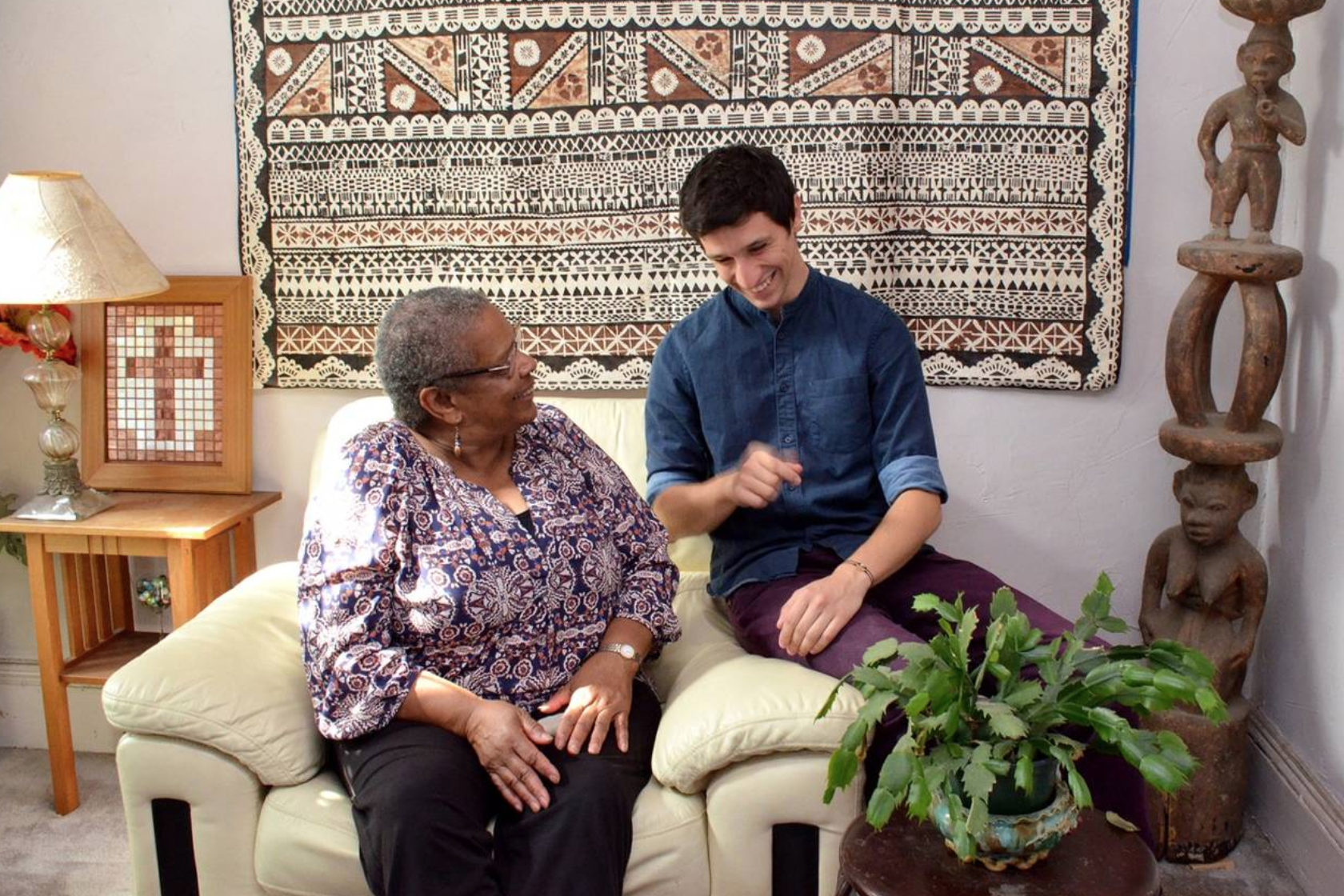 Brenda, 67, A Resident Of The Roxbury Neighborhood Of Boston, Hosted MIT Student Pheobus, 27, For A Seven-Month Fellowship, Through Nesterly, A Platform For Intergenerational Home-Sharing.

In many ways, cities have little choice, since people over 65 are the fastest-growing age group in the U.S. By 2030, about 20% of the U.S. population will be over age 65, according to the Census Bureau, up from 15% in 2016. By 2035 older adults will outnumber children for the first time in U.S. history.

As a result, urban areas are searching for innovative ways to meet the needs of this booming demographic. Their efforts range from small changes (adjusting bus schedules and putting additional benches in parks) to big (passing zoning regulations to permit the building of garage apartments that can be rented out for extra income or used to accommodate caregivers.)

Officials of some 350 public bodies, ranging from states to towns, have committed to improving life for seniors in terms of housing, outdoor spaces, recreation, transportation, social participation and other needs, as part of the AARP Network of Age-Friendly States and Communities, supported in part by the World Health Organization,

What’s more, cities are starting to realize that the benefits of age-friendly planning don’t just accrue to the elderly. That’s because many things seniors want—flexible housing, neighborhood parks, even pavement, safe crosswalks and events in which generations can mingle—appeal to the stroller set, seniors and everyone in between.

Almost 90% of seniors say they want to age in their own home, but maintaining the two- and four-bedroom homes that make up 80% of U.S. housing stock can be difficult for some. Take on a younger tenant or housemate, and aging in place suddenly gets easier.

In 2017, the city of Boston teamed up with Nesterly, a local startup, to pilot a service that matches graduate students in need of cheap housing with elderly homeowners who might want some companionship and help around the house. Users pay a one-time fee ranging from $95 to $195. Nesterly does background checks and provides an online payment system for which it charges 2.5% of monthly rent. Today, there are 251 Nesterly hosts renting rooms in the Boston area.

Now, Columbus, Ohio, another big college town, is giving Nesterly a try. Nesterly calculates that baby boomers in the Columbus area have more than 27,000 spare bedrooms they might be willing to rent to students. So, this summer the Central Ohio Area Agency on Aging, in partnership with Age Friendly Columbus and Franklin County, will roll out its own Nesterly platform.

The project will be marketed first to homeowners in four predominantly elderly neighborhoods. Nesterly says it will perform background checks on the homeowners and prospective renters, who will be able to communicate with each other through an app. If the plan works well, Ohio government officials say they will start extending it beyond Columbus this summer.

Housing For Grandparents And Granchildren

According to the Census Bureau, there are more than 2.6 million seniors raising grandchildren who live with them. Many of these grandparents are on fixed incomes and live in homes that aren’t suitable for children, or were forced to leave senior-housing developments that don’t permit resident children.

Washington, D.C. is one of a handful of cities to have built housing designed for such families. Its Plaza West affordable housing development, which was financed with tax-exempt bonds and low-income housing credits, includes 50 apartments designed for grandfamilies and an on-site Grandfamily Community Life Program operated by the nonprofit Mission First Housing Group in partnership with Golden Rule Plaza, Inc., a nonprofit affiliated with Bible Way Church, which owns the land the development sits on.

“We aren’t even a year old yet, and there is so much life around here,” says Jamari D. Clark, manager of the Grandfamily Community Life Program.

The building, home to 54 grandparents and their 80 grandchildren, features wide hallways and low counters for wheelchair accessibility. There is a playground for the children, and twice-a-week academic tutoring. Classes about computers and social media are available for the grandparents, too.

Plaza West is one of about a dozen such projects around the U.S. Others include the Grandparent Family Apartments in New York City; Pemberton Park in Kansas City; Grandfamilies Place in Phoenix and Las Abuelitas Family Housing in Tucson, Ariz.

“Children raised by grandparents rather than unrelated foster parents have more stability, are safer and have better mental-health and behavioral outcomes,” says Ana Beltran, a special adviser to Generations United, a nonprofit that advocates for the development of intergenerational communities. In addition to protecting their grandchildren, these grandparents and other relative caregivers are saving cities billion of dollars they would otherwise spend on foster care, she adds.

In Oklahoma and Kansas, dozens of 4- and 5-year-olds go to public school in classrooms inside nursing homes.

“If you want to change the lives of 100 80-year-olds, put 20 4-year-olds in the building,” says Jeff Jackson, community relations director at The Commons, in Enid, Okla. “I’ve seen uncooperative grandmas and grandpas get motivated when a four-year-old comes up to the window and waves.”

Each day, a few of the 22 students in the pre-K at The Commons spend 30 minutes with the nursing-home residents, doing art projects, singing, reading and playing games together. At recess, residents can watch the children on the playground through a long wall of windows, and from the physical-therapy room, patients can look right into the classroom.

The benefits to the children are social, emotional and academic, says Suzanne Lair, site principal at Jenks West Elementary, which runs a pre-K and kindergarten program inside the Grace Living Center in Jenks, Okla. 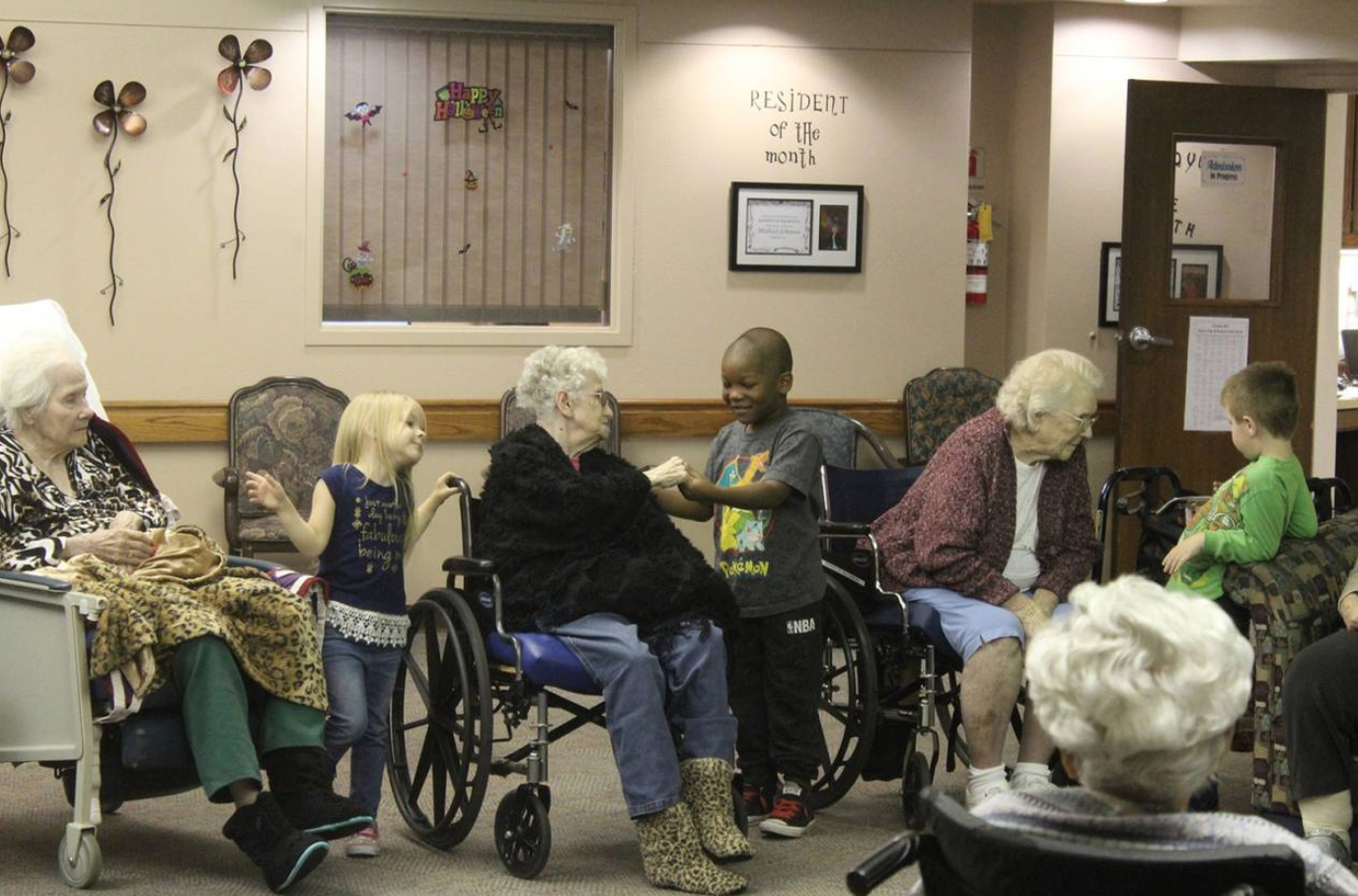 Students Attending The Pre-K At The Commons, A Nursing Home In Enid, Okla., Read, Sing And Play Games With Residents On A Regular Basis.

Program graduates need less reading support in elementary school, Ms. Lair says. “We really attribute that to their one-on-one daily reading with the grandmas and grandpas,” she says.

The children also become comfortable around people in wheelchairs, people with oxygen tanks and people with many of the other disabilities of old age.

There are currently five such programs in Oklahoma and one in nearby Coffeyville, Kan., says Chris Smith, director of early childhood at Enid Public Schools. The Enid and Jenks districts rent their classrooms for $1 a year from the nursing homes. Both programs are full.

A Park Designed For Seniors

When the City of Wichita, Kan., surveyed residents of its Tri-S neighborhood, which has a large share of grandparents caring for grandchildren, they said they wanted a park suitable for multiple generations.

In 2013, half-acre Grandparents Park opened, featuring pleasant landscaping, pickleball courts, benches, an exercise station for people over 50 and a playground for those closer to 5. AARP Kansas helped with a $22,000 grant. There was help also from the Central Plains Area Agency on Aging, the Older Adult Alliance and other groups.

Some cities see advantages in turning old tennis courts into pickleball courts. Pickleball is played with a hollow plastic ball and wooden or composite paddles on a badminton-sized court. Seniors like the game because it is competitive but less strenuous than tennis.

The City of Findlay, Ohio, replaced three underused, cracked tennis courts with an eight-court pickleball facility. The courts are now active with players, most of whom are between 60 and 75 years old. On “try-it-out nights,” regulars teach newcomers of all ages how to play.

Roughly 8.4 million Americans age 65 and older don’t drive, according to AARP calculations based on the 2017 National Household Travel Survey. There will be more soon.

Denver is working on a new online trip planner that many local seniors may find more useful than the trip planners you find on most transit agency websites or Google Maps. In addition to showing train and bus schedules, Denver’s system aims to integrate such transportation options as private-car or public-van services that require requests for pickup. The goal is to make it easier for seniors to plan the so-called “first and last mile” of their travel.

Another way Denver is making travel easier for seniors is with its FlexRide service. FlexRide vans circulate in 21 areas of the city making both scheduled and on-demand stops. Call ahead or book online, and a FlexRide van will pick you up at your door and take you to a destination in its service area for the same price as a regular bus fare. Those with disabilities travel free.

Rural communities, by contrast, don’t have budgets for circulating vans. Vassalboro, Maine, population 4,347, used to offer weekly vans to the nearby towns of Waterville and Augusta, but they were rarely used.

This summer, Vassalboro will try a different solution: an online system for linking riders and volunteer drivers. The town will lease ride-coordination software from the nonprofit ITN America, whose systems currently enable a nationwide network of volunteer drivers to not only schedule rides but also to earn future rides by volunteer driving today or trading in a car.

These 16 Money Wasters Will Ruin Your Retirement (#GotBitcoin?)

Three Steps To Take If You’re Behind In Retirement Savings (#GotBitcoin?)