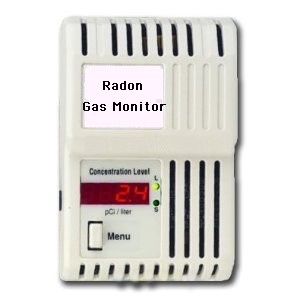 Radon gas in air or water is a health hazard resulting from uranium breaking down in soil. Exposure to radon can cause lung cancer. Continuous home radon monitoring is recommended in high radon areas or when radon mitigation systems are used. Radon gas levels change according to humidity and season.

Protect Your Family From Lung Cancer From Radon Gas Exposure With The Only EPA Evaluated Radon Gas Alarm. Having This Monitor in Place Will Provide You And Your Family Peace Of Mind Regarding Dangerous Radon Levels. Radon Gas In Air or Water is A Health Hazard. Over-Exposure To Radon Can Cause Lung Cancer.

When in doubt, assume the indoor air quality is poor, and open the windows as much as possible. Check office buildings, schools, gyms and other places that trap indoor air pollution. Our Radon Gas Detector takes 48 hours to measure and then starts beeping on the hour if over 4 pCI/L.

Audible Alarm If Short Or Long-Term Radon Gas Averages Are 4 Pci/L Or Greater.

Failsafe Self Test: Every 24 Hours.

User Can Manually Test Detector Operation. Button To Mute Or Reactivate Audible Alarm When Unit Is In Alarm.

* Has A Numeric LED Display Screen

* Conducts A Self-Test Every 24 Hours

Radon is a chemical element with symbol Rn and atomic number 86. It is a radioactive , colorless, odorless, tasteless noble gas , occurring naturally as the decay product of uranium or thorium . Its most stable isotope , 222 Rn , has a half-life of 3.8 days. Radon is one of the densest substances that remains a gas under normal conditions. It is also the only gas that is radioactive under normal conditions, and is considered a health hazard due to its radioactivity. Intense radioactivity also hindered chemical studies of radon and only a few compounds are known.

Radon is responsible for the majority of the public exposure to ionizing radiation. It is often the single largest contributor to an individual’s background radiation dose, and is the most variable from location to location. Radon gas from natural sources can accumulate in buildings, especially in confined areas such as attics and basements. It can also be found in some spring waters and hot springs.

The presence of radon in indoor air was documented as early as 1950. Beginning in the 1970’s research was initiated to address sources of indoor radon, determinants of concentration, health effects, and approaches to mitigation. In the United States, the problem of indoor radon received widespread publicity and intensified investigation after a widely publicized incident in 1984. During routine monitoring at a Pennsylvania nuclear power plant, a worker was found to be contaminated with radioactivity. A high contamination of radon in his home was subsequently identified as responsible for the contamination.