Naked And A Little Afraid: Testing The Body-Scanning Mirror

Naked Labs’ body scanner does a great job creating a 3-D model of your nearly naked body, but just how far are you willing to let technology go? 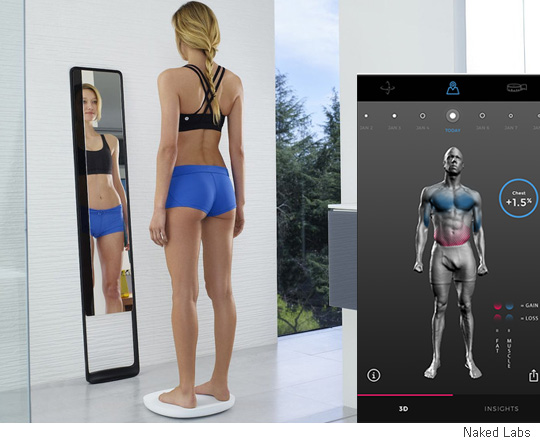 Despite being alone in my bathroom, I undress at YMCA-locker-room speeds. Down to just my bra and underwear, I tap the “scan” button in the iPhone app and quickly step onto a white turntable. Like a plate of lo mein on a Lazy Susan, I’m slowly spun around as 3-D cameras on the full-length mirror capture a detailed map of my body. I quickly throw on my clothes and wait for a report telling me if there is, indeed, less fat on my thighs today.

This isn’t an episode of Netflix’s “Black Mirror” entitled “The Real Black Mirror.” This is my actual morning routine with the $1,395 Naked 3-D home body scanner.

I have been getting (basically) naked in front of an internet-connected mirror. (And for male users, such as the Naked Cowboy I enlisted to help me test, the company advises stripping down to just underwear. “Whatever is exposed is measured,” says its website.) Lined with depth sensors, the Naked—possibly the worst-named product in all of technology history—plots a 360-degree model of my body and calculates various body measurements. 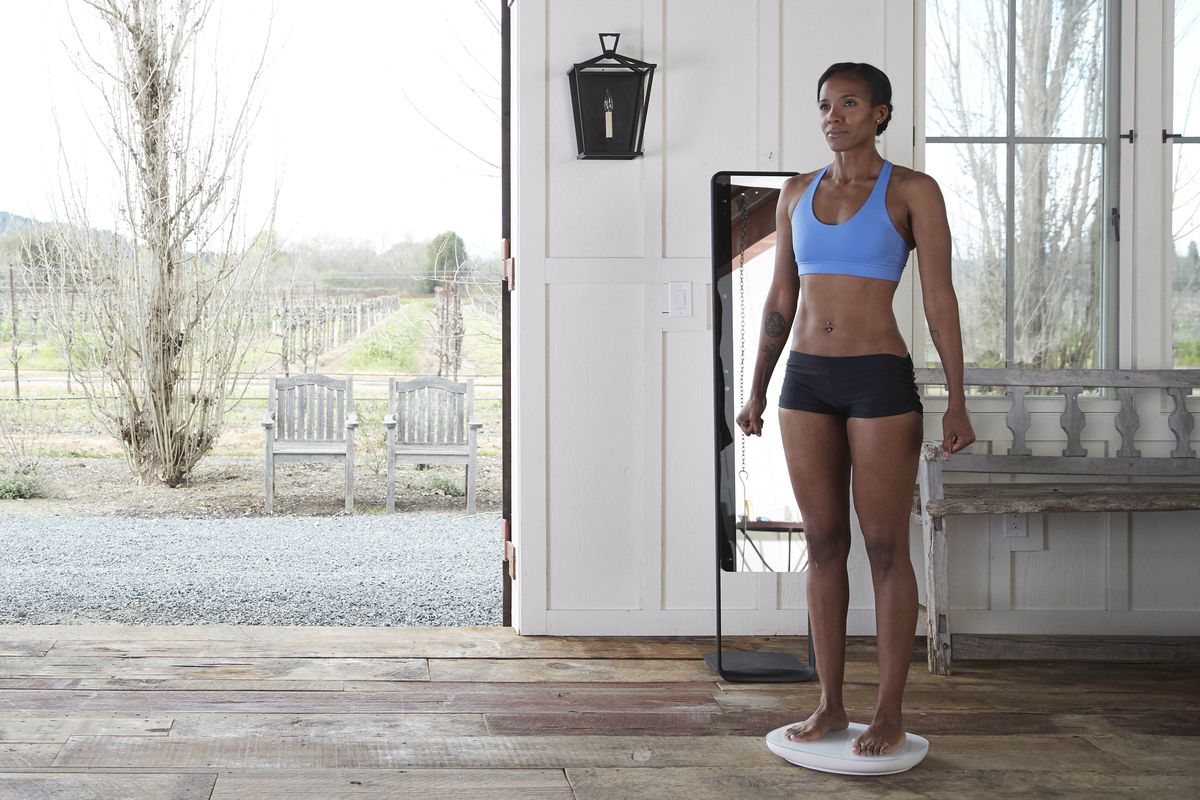 There Are Two Ways of Looking At This Product:

1) What a time to be alive! Within minutes we can get surprisingly accurate measurements that go way beyond the traditional scale, potentially aiding our health and fitness progress.

2) It’s here, the dystopian future we’ve been warned about. We’re willfully standing in our skivvies in front of cameras, handing over the privacy of our bodies to a Silicon Valley startup with an uncertain future.

After stripping for the product for six weeks, my verdict is a combination of the two.

It’s still hard for me not to LOL every time my nearly nude body spins around on the white scale. How much technology is at work during those moments to capture every inch of imperfect flesh?

The mirror has three Intel RealSense depth cameras and a laser pointer to show you where to place the rotating scale. During your 15-second spin, four gigabytes of depth data are captured. Then the mirror’s built-in laptop-grade computer crunches the raw data and sends a smaller file (2 to 3MB) to the cloud so you can access your scan and measurements via the app.

The process takes about two to three minutes, but it’s worth the wait to see what you’d look like if you spray-painted your entire body metallic silver. 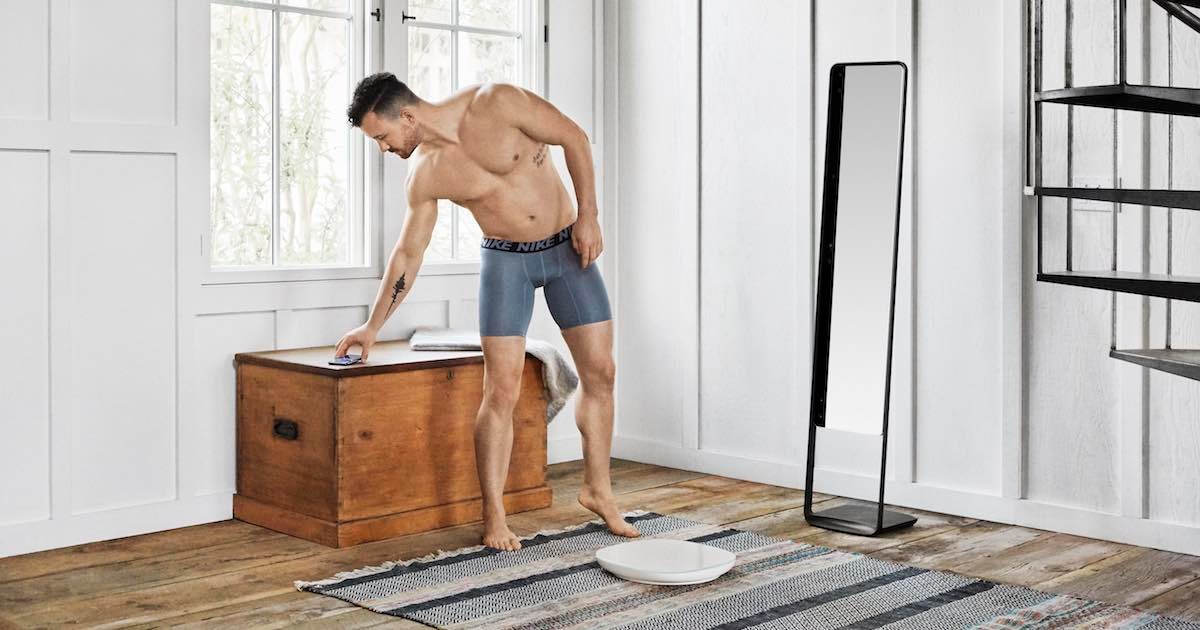 “We do not take pictures of your body,” Ed Sclater, co-founder and chief operating officer of the scanner’s maker, Naked Labs Inc., assured me. The cameras capture only 3-D depth maps—no color. Sclater explained this was done to preserve user privacy, and because it’s easier to assess your body critically when looking at more impersonal models.

Unlike many hardware products that I test from new startups, I ran into no technical issues with the mirror and its app. There were, however, a few notable annoyances: Your skin looks like melted wax if the light isn’t bright enough, and if you don’t stand super still, you’ll look like an anteater. The system would also benefit from voice control, because tapping your phone to scan is awkward. Besides, who doesn’t want to say: “Alexa, scan my body!”?

Turns out, I’m the Naked’s target customer. Over the past three months, I’ve lost about 10 pounds (eating healthier—no, not Keto—and regularly working out). I’ve hit a point now where the scale always shows the same weight, but my body is still toning up. The body scans have shown that.

In the app, you can compare two scans and their associated measurements. I can see my thighs and backside getting more muscular from mid-July to late August. That’s also reflected in my body-fat percentage and my lean mass, a number that excludes fat but includes the weight of muscles, bones, organs, skin, etc.

But are the Naked’s measurements to be trusted? It depends. According to the Naked app, on Monday morning, my body fat percentage was 25%. A $25 bioimpedance scale said the same. For professional verification, I went on the same day to Halevy Life, a private New York City gym that does hydrostatic weighing. This jacuzzi-like tub, hooked up to a computer that calculates lean and fat mass, is considered by medical professionals one of the most accurate tests. The result of repeated dunks? 37.8% body fat percentage—a pretty big difference.

“There isn’t a ground truth, short of dissection,” says Sam Winter, head of research at Naked Labs. “Every method has shortcomings. What is important is consistency. Once you have a measurement from a machine—our product, hydrostatic—the progress is the most meaningful.”

Naked did get an A+ on one thing: When a specialist measured my arm, thigh, waist and hip with a measuring tape, it was within a few decimal points of the Naked.

For the growing affluent, health-conscious group decorating basements with $2,000 Pelotons with $30 monthly subscriptions, the $1,395 Naked may not seem like an outlandish purchase. But there’s another cost to consider. Every time I step up on the white platform and see the orange scan ring light up, I feel a tinge of anxiety about where this thing is beaming my body. 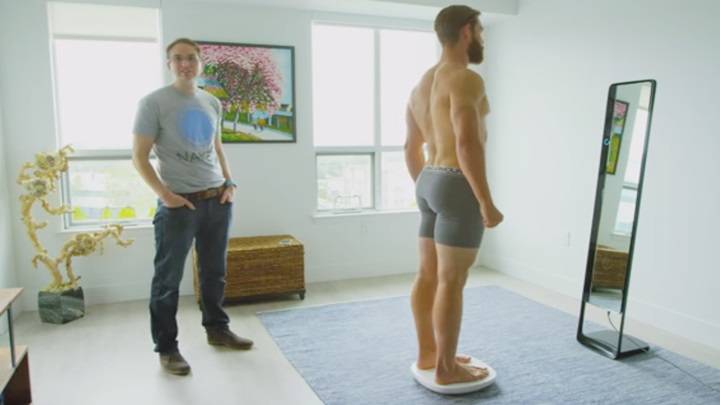 Naked Labs makes a series of privacy assurances: No Naked Labs employees can see your scans; the company stores your data securely on encrypted servers; scan data is decoupled from any personal information; it will never sell your personal information or contact info; and you can delete your data at any time. (It’s actually got one of the better privacy policies I’ve read lately.)

Some may argue standing in front of the Naked is really no different than snapping nude mirror selfies, especially before-and-after fitness comparisons.

I don’t agree. You’re giving a startup access to the scan and all the data that comes with it. If the recent Facebook breaches have shown us anything, it’s that even data we thought was harmless could end up in places we’d never have foreseen, with potentially harmful side effects.

Some people cover their laptop and phone cameras with tape… some people buy body scanners. There’s no naked truth here, just you, taking a hard look in the mirror you already own, asking whether the benefits of the technology outweigh the privacy costs.