As California’s Department of Public Health reports an all-time high number of cases of STDs in the state, AHF unveils its latest STD prevention and treatment awareness campaign targeting gonorrhea.

New billboards were prompted by a case of super-resistant strain of gonorrhea reported to the World Health Organization (WHO) as well as the CDPH’s report this week of 75,450 cases of gonorrhea in California in 2017—a 16% increase over 2016, with 33% of the cases in people under the age of 25.

–AIDS Healthcare Foundation (AHF) launched its latest national outdoor advertising and awareness campaign with new billboards raising an alarm and offering a ‘Gonorrhea Alert’ about drug-resistant strains of the sexually transmitted disease—including a case of what has been referred to as ‘super gonorrhea’ reported to the World Health Organization (WHO) by physicians in the United Kingdom earlier this year.

AHF has been sounding the alarm on rising STD rates through our outdoor advertising campaigns for several years now. We all need to keep making the public aware of and encourage sexually-active individuals to get tested for STDs on a regular basis. 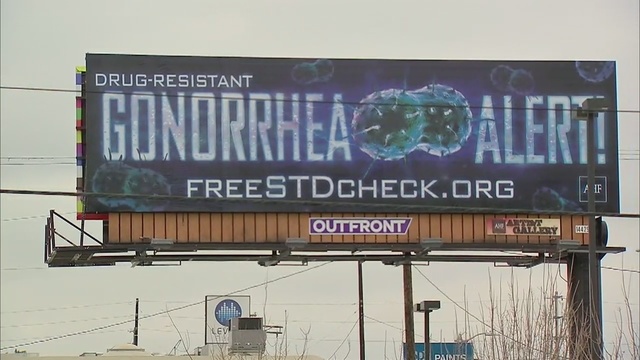 The new Gonorrhea Alert billboards, which posted this past week in Los Angeles and are going up nationwide over the next two weeks, come on the heels of an alarming new report out by the California Department of Public Health this week showing all-time high numbers of STDs in California:

The artwork on the gonorrhea billboards feature a dramatic microscopic of image the Neisseria gonorrhea strain resistant to antibiotics. At first glance, the billboard art resembles a poster for a possible new Hollywood science-fiction movie. The billboards first appeared throughout Los Angeles starting the week of May 14th and then will be posted over the next two weeks in more than a dozen other cities and communities nationwide where AHF has operations.

The ‘Gonorrhea Alert’ campaign follows a prior ‘Syphilis is Serious’ AHF campaign launched earlier this year highlighting prevention and treatment of syphilis. Both campaigns drive the public to AHF’s www.FreeSTDCheck.org website to learn more about the disease and find locations to access free STD testing and affordable care for the treatment of gonorrhea, chlamydia and syphilis through AHF.

Gonorrhea is one of the most commonly reported STDs in the United States, with more cases than syphilis but fewer cases than chlamydia. According to the CDC, there were close to half a million cases of gonorrhea (468,514) in the U.S. in 2016, with at least 3.6% of that population showing resistance to antibiotics used to treat the infection. And while antibiotic-resistant gonorrhea is not a new public health issue, healthcare professionals no longer have a treatment replacement for the current dual-therapy or two-drug regimen, which makes cases of drug-resistant gonorrhea more concerning (click here for CDC page on Antibiotic-Resistant Gonorrhea Information)—and so-called cases of ‘super gonorrhea’ even more so.

“AHF has been sounding the alarm on rising STD rates through our outdoor advertising campaigns and Wellness Centers for several years now, including with our prior syphilis campaigns that made headlines around the world. Yet we continue to see an inadequate response from the CDC and the drug companies to address the growing public health threats posed by these infections, particularly those that may be medication-resistant,” said AHF President Michael Weinstein. “We all need to keep making the public aware of and encourage sexually-active individuals to get tested for STDs on a regular basis—and be treated, if and as necessary—and to also use tools like condoms to prevent or reduce the likelihood of infections.”

Below are the markets where the “Drug-resistant Gonorrhea Alert” campaign will run. As noted, Los Angeles will start the week of May 14th (with some L.A. locations already posted). Artwork in the other markets will post toward the end of the month. In the markets outside of Los Angeles, the advertising mediums include the following: bulletins (billboards); ‘street furniture’ (transit shelters and bus benches) and Transit (station platforms, rails and buses).

AHF has been promoting sexual health and STD screening through its innovative billboard campaigns for the past several years in response to the overall skyrocketing rates of STDs nationwide, particularly among young people and men-who-have-sex-with-men.

AIDS Healthcare Foundation (AHF), the largest global AIDS organization, currently provides medical care and/or services to over 894,000 individuals in 39 countries worldwide in the US, Africa, Latin America/Caribbean, the Asia/Pacific Region and Eastern Europe. To learn more about AHF, please visit our website: www.aidshealth.org, find us on Facebook: www.facebook.com/aidshealth and follow us: @aidshealthcare.