Rioters In Paris Teach Americans How To Stand-up Against Government Over-Reach (#GotBitcoin?) 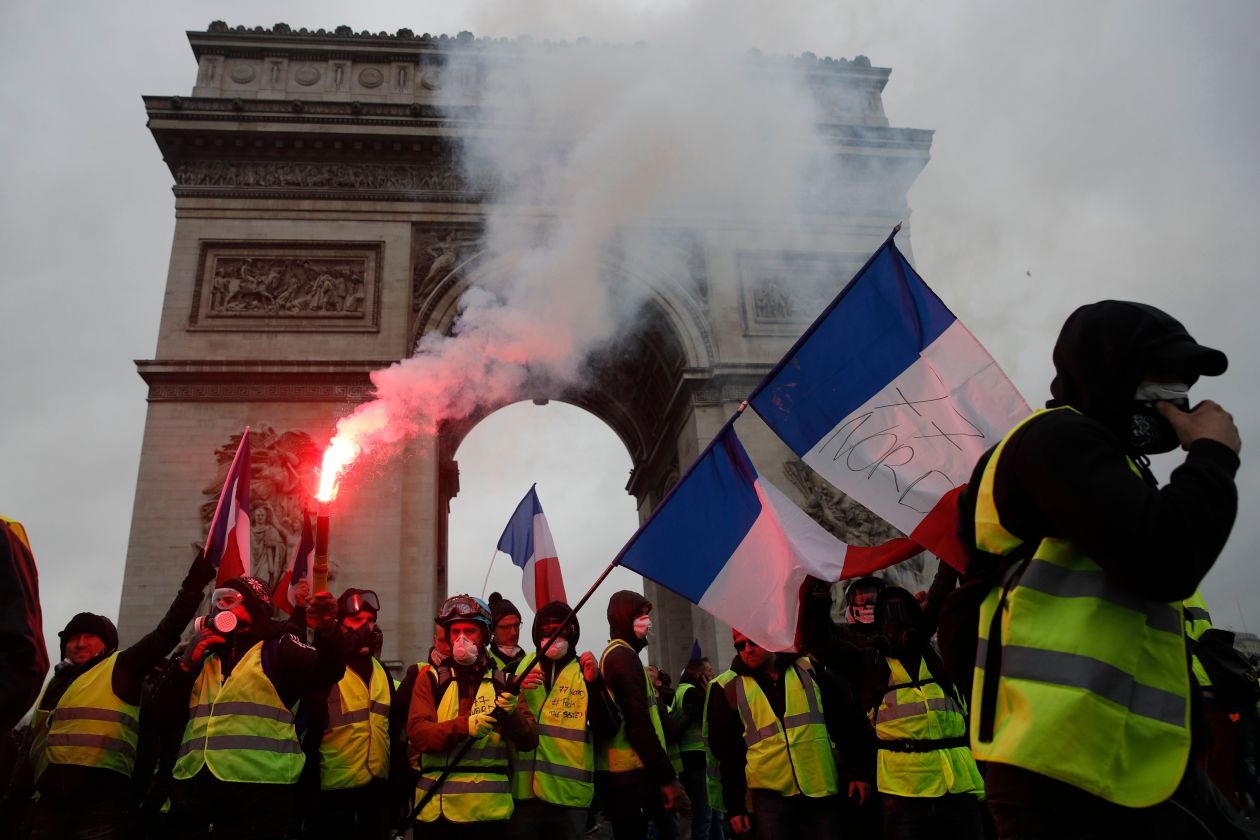 Paris citizens stand-up and riot against government over-reach. Government to increase price of fuel by about 30 cents per gallon and also saying it will continue to rise over the next few years. Gas already costs about $7.06 per gallon in France.

Grass-roots movement ‘gilets jaunes’ led violent protests in the heart of Paris, pressuring him to back down on key piece of his economic overhaul.

French President Emmanuel Macron suffered the first major setback in his push to overhaul the French economy, backing off a fuel-tax increase that enraged much of the nation and sparked a grass-roots protest movement against his government.

Faced with another weekend of destructive protests by the gilets jaunes—or yellow vests—Prime Minister Édouard Philippe told a press conference on Tuesday that the tax increase would be pushed back six months to allow for public discussion. The worst riots to hit Paris in decades erupted during antigovernment protests on Saturday, leaving the city’s shopping and tourist center dotted with burning cars and damaged storefronts. Protesters vandalized the Arc de Triomphe, rattling Mr. Macron’s administration and the country.

“No tax is worth threatening the unity of the nation,” Mr. Philippe said.

The protests have become a test of Mr. Macron’s resolve to forge ahead with his broader agenda, particularly his plans to make France more business-friendly. The concession marked the first time the Macron government has blinked since the former investment banker took office in the spring of 2017.

Mr. Macron won the presidency on a platform that promised to make the French economy more competitive while also cutting pollution and preserving the nation’s generous social protections. His proposals included reduced jobs protections for workers, higher fuel taxes, cutting red tape for businesses and a repeal of much of France’s wealth tax.

The French leader has eschewed the consensus-building approach of his predecessors. Instead, he wielded his executive powers and his large majority in Parliament to defy the political opposition, unions and other groups.

In recent months, however, Mr. Macron’s approval ratings have plummeted and lawmakers in his own party have urged him to offer concessions as the gilets jaunes protests have mounted. Polls show that more than 70% of the public supports the demonstrators.

It remained unclear whether the delay was enough to thaw tensions. On social media, gilets jaunes were preparing to protest for a fourth consecutive weekend. 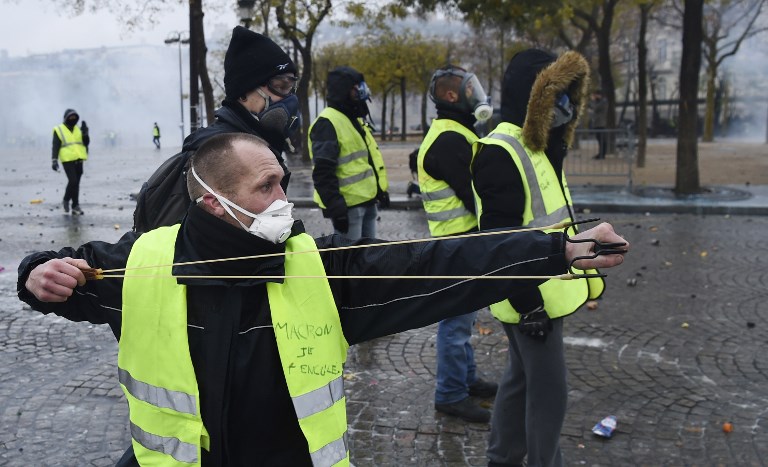 A Demonstrator Uses A Slingshot To Throw Projectiles At Police During A Protest Of Yellow Vests (Gilets Jaunes)
Against Rising Oil Prices And Living Costs, On The Champs Elysees Avenue In Paris On December 1, 2018. –
Thousands Of Anti-Government Protesters Are Expected Today On The Champs-Elysees In Paris,
A Week After A Violent Demonstration On The Famed Avenue Was Marked By Burning Barricades And
Rampant Vandalism That President Emmanuel Macron Compared To “War Scenes”.

“It’s a small victory because he is finally backing down,” said David Roig, a 29-year-old taxi driver. “But what we want isn’t a delay. It’s the cancellation of the planned tax increase.”

Mr. Macron has much left to accomplish from his agenda. In a speech to his ministers in November, he set the goal of making France “an environmental power of the 21st century.” He is also planning overhauls of the country’s pension system and schools, along with the elimination of tens of thousands of civil-service posts.

Mr. Macron’s agenda also suffered a setback on Tuesday in Brussels, where eurozone finance ministers refused to back French proposals for a sweeping overhaul of the bloc. Mr. Macron made shoring up the currency area a centerpiece of his campaign to prevent a repeat of the crisis that nearly tore the eurozone apart several years ago.

The finance ministers agreed on several measures Mr. Macron backed, including using the eurozone’s bailout fund as a backstop to resolve failing banks and an easing of terms for governments to borrow from the fund.

But there was no deal on a common eurozone budget to fund government spending in nations hit with economic downturns, a goal of Mr. Macron’s. Nations such as the Netherlands and Finland oppose pooling their taxpayers’ money for such purposes. Ministers agreed only that work could start on designing a budget to improve the bloc’s competitiveness and to help poorer economies converge with wealthier ones. The size of that budget has yet to be discussed.

“We would have liked to go further,” said French Finance Minister Bruno Le Maire, “but we knew that for certain governments, this wasn’t possible.”

The gilets jaunes movement largely has rebuffed the government’s appeals to negotiate, discouraging any representatives from sitting down with officials. A few gilets jaunes who were preparing to meet with Mr. Philippe on Tuesday canceled after receiving threats from more radical factions of the movement.

The protests have exposed the weakness hidden behind Mr. Macron’s large victory over far-right opponent Marine Le Pen. He assembled a winning coalition of centrist voters, but just 42% of registered voters backed Mr. Macron as unprecedented numbers of French left their ballots blank or abstained. Many gilets jaunes come from this segment of the French electorate, deeply skeptical of his centrist, business-friendly policies.

While the fuel-tax proposal spawned the gilets jaunes, the movement has since embraced a broader antigovernment agenda, accusing Mr. Macron of being a champion of the rich at the expense of the working class.

The tax proposal, aimed at simultaneously raising revenue and cutting automobile pollution, was a hallmark of Mr. Macron’s technocratic leadership style. Economists say such consumption taxes that reduce pollution and other harmful effects are an efficient way for the government to raise revenue.

That approach, however, alienated swaths of French people who live in rural and suburban areas and rely on their cars to reach their jobs in city centers. It also compounded the public’s perception that rural France has borne the brunt of globalization’s impact, as forces such as e-commerce and big-box retail have left villages and towns hollowed out.

The Result: Hundreds of thousands of people flocked to Paris and other cities around France, blocking roads, clashing with police and demanding Mr. Macron’s resignation. 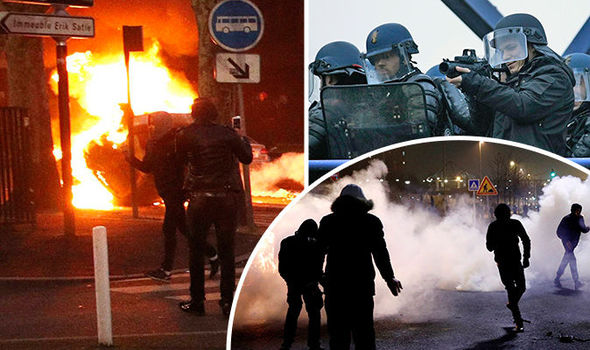 On Tuesday, Mr. Philippe called for a nationwide “consultation” to discuss fiscal policy and public services outside of major cities. He also said there wouldn’t be any increases in the price of natural gas and electricity over the same six-month period.

“The government has made proposals,” Mr. Philippe said. “Let’s talk about it. Let’s improve them, complete them, I am ready for it.”

People were protesting fuel taxes, but the demonstrations are also an indication of growing animosity toward French President Emmanuel Macron.

Nearly 20 people — including police — were injured in Saturday’s skirmish, which could cost the city $1.7 million. It’s one of the most dramatic moments in more than a week of demonstrations that have led to a total of about 400 injured and at least one death.

The protests started around November 17 when French drivers sporting yellow vests led a demonstration of 280,000 people across the country to push back against rising taxes on gas and diesel. Macron, as part of his many economic reforms, announced the gas taxes earlier this year to minimize France’s reliance on fossil fuels.

The protest movement — known as gilets jaunes, French for the “yellow vests” demonstrators wear — has blockaded streets and highways, burned cars, and skirmished with police in response to the price hike. In recent days, protesters seem to be directing their anger at the state of France’s economy as well.

“It’s unacceptable that people do not have decent salaries, that at the end of the month, they are in the red and can’t afford to eat,” Idir Ghanes, an unemployed computer technician in Paris, told the Guardian on November 24.

In effect, the protests are turning into a large-scale rebuke to Macron’s leadership — and it’s unclear if he’ll survive it.

Why So Many French People Are Unhappy With Macron

Jeff Lightfoot, an expert on France at the Atlantic Council think tank in Washington, DC, told me there are two main reasons Macron has become such an unpopular figure.

The first is that Macron doesn’t really have a political base. He’s a Parisian technocrat that rode a wave of dissatisfaction with traditional French political parties to presidential victory in May 2017. He has yet to gain much support outside of urban areas, and didn’t receive tremendous support during last year’s vote. So one of Macron’s biggest political liabilities is that he doesn’t have a reliable contingent of support if things get bad.

The second reason, unfortunately for Macron, is that things have gotten bad. France’s economy is growing, but very slowly. Most of the growth is centered in its major cities, like Paris, but others on the periphery and rural communities haven’t seen as much profit. “The discontent has been rising,” Lightfoot said, in part because Macron can come off as arrogant and out of touch.

It also doesn’t help that Macron, in an effort to reform France’s economy, is cutting longstanding benefits and ending labor protections. For example, he’s made it easier for companies to hire and fire employees and fought unions to end subsidies for certain sectors. That’s why some see Macron as a president of the rich, Lightfoot added, initiating changes that many of the country’s wealthy can muddle through but that the nation’s poorer cannot.

That means Macron will be in protesters’ crosshairs for quite some time, especially since he has given no indication he will bend to their demands. It’s therefore possible that some of his political competitors — like the far-right politician Marine Le Pen — can take advantage of the public’s disaffection and become the premier alternative to Macron.

That has France watchers quite nervous about what happens not just in the next few days but well into the future. “It’s going to be a bumpy few years coming up,” Lightfoot told me.

POLL: RIOTERS IN PARIS TEACH AMERICANS HOW TO STAND-UP AGAINST GOVERNMENT OVER-REACH