Online Shoppers Learn Their Own Tricks for Outwitting Sellers

Savvy consumers are exploiting tactics used by retailers to spur more spending; one tip: leave items in the cart. Online Shoppers Learn Their Own Tricks for Outwitting Sellers

While many online retailers successfully employ a range of marketing strategies to persuade shoppers to spend more money, some savvy consumers have begun gaming the system. 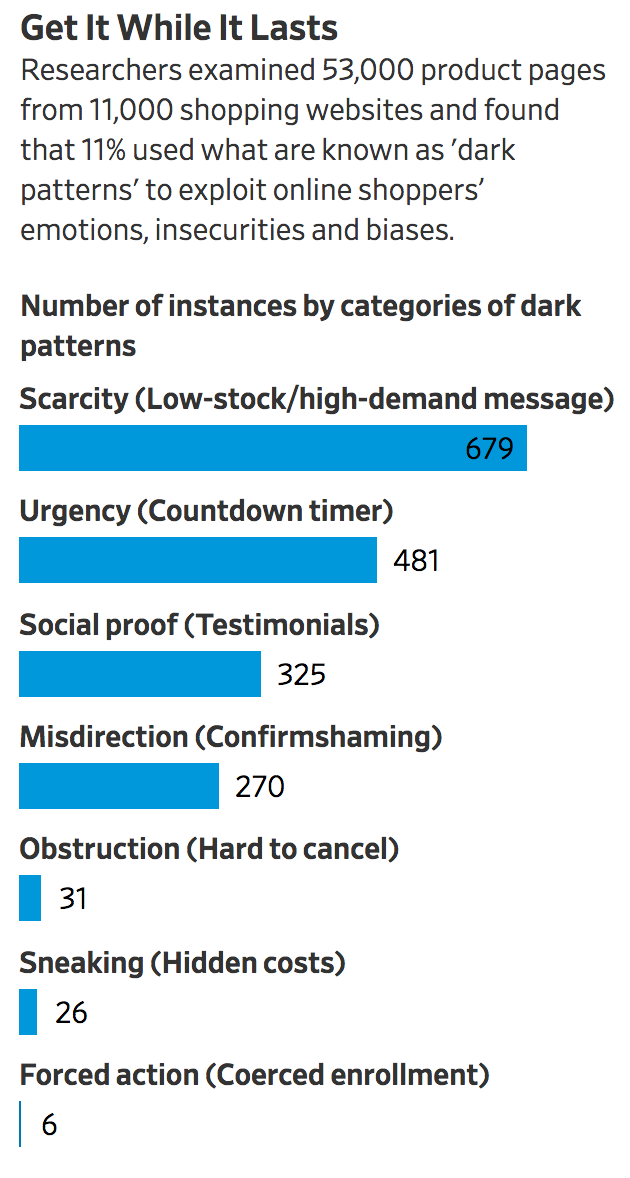 A report published in September from researchers at Princeton University and the University of Chicago found that 11% of shopping websites use “dark patterns,” ploys like fake discounts or fudged inventory numbers designed to change customer behavior. Other strategies, like offering a discount if a customer signs up for promotional emails or enticing shoppers who are about to close their browsers with free shipping, are ripe for exploitation.

Ted Harvatin, 63 years old, said he has squeezed additional discounts out of the website he uses to buy meal replacements by abandoning his shopping cart after adding the items he wants to purchase.

Some of the marketing tricks being leveraged by online stores may not be legal, according to Edgar Dworsky, founder of consumer resource guide consumerworld.org.

“To say that this is a discounted price only for the next hour or next five minutes and you come back again later and it’s still the same price, that’s illegal,” he said. “It’s an unfair deceptive practice.”

Mr. Dworsky, who was previously an assistant attorney general in consumer protection for Massachusetts, said consumers can report shady sellers to the Federal Trade Commission.

Some of the strategies shopping websites use rely on shoppers’ assumptions about the retailer or their reluctance to do additional research before making a purchase.

For example, Amazon has convinced many shoppers that it always has the best price, Mr. Dworsky said. One way the company has achieved that reputation is by comparing its price with the list price, which is the suggested retail price according to the manufacturer, supplier or seller. However, that price may differ from the price most stores are charging, he said.

The result? “You think you’re saving a bundle,” Mr. Dworsky said, even if the price is typical.

To make sure Amazon’s price is actually the best, he recommends old-fashioned comparison shopping. A price-comparison tool like camelcamelcamel.com will show the price history for many Amazon listings as well as prices from other online sellers.

Amazon says it regularly checks its list prices against prices recently found on its website and that of other retailers.

Mr. Harvatin said as much as he likes finding the best price possible, taking the extra time to comparison shop has its risks.

“I’ll say, ‘OK, this is the one I want,’ and go back and it’s no longer available,” he said. “If I find something I like and I’ve been looking awhile, and they say there are only two left, I’m just going to buy it. I don’t care if they’re lying to me.”

Laura Wilson, 51, of Stillwater, Okla., said she has noticed that many online marketing tactics have analogues in bricks-and-mortar stores, which means she can use similar strategies to combat them. She compared sponsored listings to end caps, the product to display at the end of a store aisle, and likened low-inventory alerts to stores’ practice of limiting what they put on shelves.

“You go to Walmart looking for Harry Potter Legos and they have two out there and that’s it, so you know it’s popular,” she said. “I have no idea how many they might have in the back though.”

She said it pays for shoppers to know what they are looking for before they start browsing, and to have a healthy skepticism of the things sellers tell them. “These people are trying to sell you something,” Mrs. Wilson said. “Of course they’re going to tell you it’s great.”