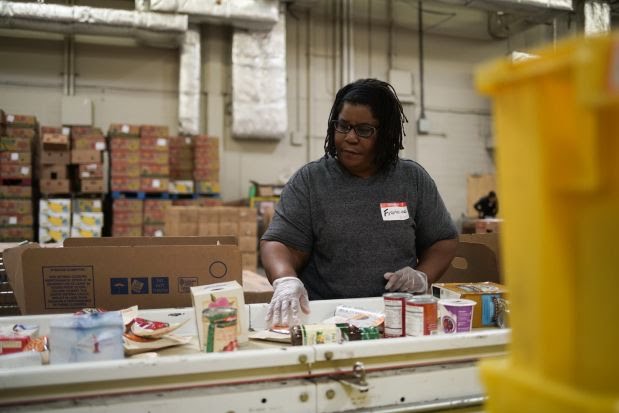 Food banks across the U.S. are gearing up for an influx of pork, apples and cheese when trucks begin delivering $1.2 billion of agricultural products the government agreed to buy from farmers to ease the pain of tariffs.

The government will buy the food over four quarters beginning this month, according to the Agriculture Department. Feeding America, a nationwide network of 200 food banks, said the food will be parceled out over 18 months and will add 950 million pounds to the roughly 700 million pounds already flowing annually to food banks.

Food bank executives say they welcome the chance to feed more hungry Americans, but they also worry about the cost and logistical challenges of handling the unexpected bounty.

“Even free food has a cost,” said Carmen Del Guercio, chief executive of the nonprofit Maryland Food Bank. It costs his organization 23 cents to store and deliver 1 pound of food, he said, and no public funding currently exists to offset the costs of the influx.

The government, which announced the plan in August, will spend nearly half of the $1.2 billion to buy pork products, and roughly $90 million each for apples, pistachios and dairy products. Figs, peanut butter and orange juice are also among the nearly 30 commodities slated for purchases. The purchases are part of the Trump administration’s efforts to assist farmers dealing with recent retaliatory tariffs levied by China and other countries.

Despite a strong national economy and low unemployment, food banks around the country say there is a need for the increased food assistance. Many recipients are employed but encumbered by high housing costs, according to executives from food banks in states such as California and Texas.

In Minnesota, where unemployment is 2.9%, the state last year had a record number of food pantry visits, said Marcus Schmit, advocacy director at Second Harvest Heartland, which covers Minnesota and western Wisconsin. “There’s still a huge demand,” he said.

Feeding America is lobbying the Agriculture Department and Congress for an estimated $200 million to $300 million to distribute the extra food.

“It’s an inundation of a quantity that we’re not used to,” said Kate Leone, senior vice president of government relations at Feeding America. “That is the challenge for us: figuring out how to never turn away good food people can use, and at the same time being able to move it in a way that makes sense.”

A USDA representative declined to comment on the request.

Without government funding, food banks said they would rely on private donors, and at least one said it might need to curtail other services. Ms. Leone said the federal government pays about 22% of distribution costs for its regular supply, though some food banks said it covers about half.

The Oregon Food Bank said it anticipates receiving 30 million pounds of food over 12 months, doubling its prior allotment and adding about $500,000 in costs to its annual operating expenses of about $67 million.

“It’s so much cheaper than buying the food, but it’s still money that needs to be raised in order to handle this food,” said Chief Executive Susannah Morgan.

Food banks in several states said they would store the added food until it makes sense to deliver it, because the local food pantries that they distribute to have limited refrigeration and freezer space.

Second Harvest Food Bank of Middle Tennessee recently built a nearly 13,000-square-foot freezer that doubled capacity, so it has the needed space, said Chief Operating Officer Kimberly Molnar. She said it would be “extremely helpful” if the government helped with distribution costs. “It’s expensive to run trucks,” she said.

In rural parts of West Texas, one likely approach will be to have recipients take food directly off refrigerated trucks, said Libby Campbell, executive director of the West Texas Food Bank in Odessa, Texas. The resurgent oil economy there has largely passed by the elderly and single parents, she said.

One concern shared by food bank officials is that the infusion is temporary. Another worry in the U.S. heartland is that farmers may suffer lasting damage from trade disputes, said Karen Siebert, advocacy and public policy adviser for Harvesters—The Community Food Network, which operates in Kansas and Missouri.

If tariffs cause farmers to lose overseas markets, she said, that could lead to fewer farm jobs and higher demand for food assistance. “All those things play into the economic health of our community and the needs people have,” she said.