The theory that fears of 5G technology might have been behind the Nashville bombing on Christmas Day prompted federal, state and local law enforcement officials to focus on the possibility of additional or copycat threats to U.S. telecommunications infrastructure, according to restricted government threat warnings exclusively obtained by Newsweek. Why Nashville Bomb Investigators Feared Copycat Attacks By 5G Conspiracists

Anti-5G conspiracies have steadily grown since 2016, when telecommunications companies began installing Fifth Generation (5G) wireless technology infrastructure throughout America. Social media has been awash with conspiracy theories about 5G, a movement that has grown in size and intensity with the COVID-19 pandemic. 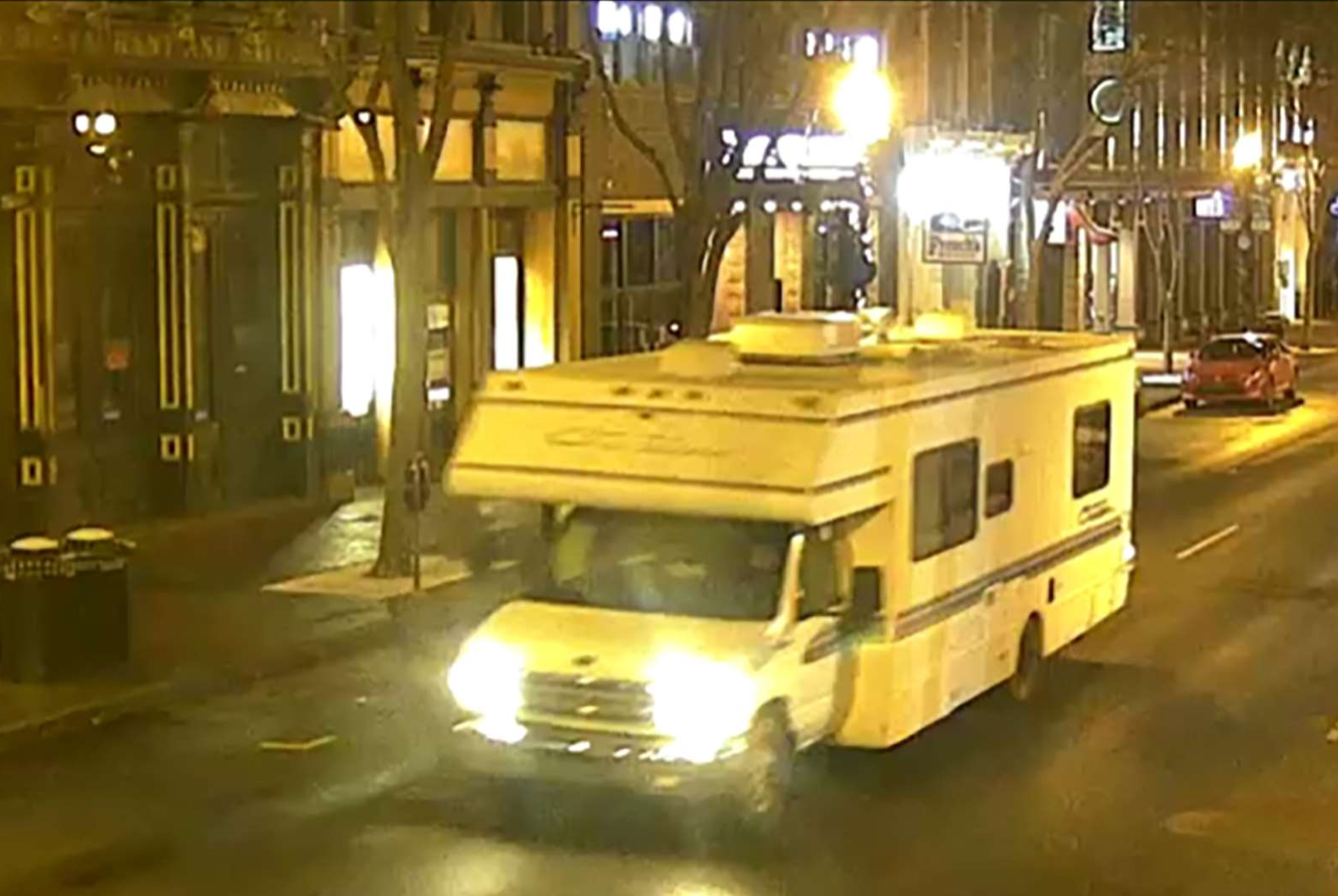 In This Handout Image Provided By The Metro Nashville Police Department, A Screengrab Of Surveillance Footage Shows The Recreational Vehicle Suspected Of Being Used In The Christmas Day Bombing On December 25, 2020 In Nashville, Tennessee.

The first large 5G networks were activated in 2018. The nationwide buildout will eventually include thousands of new towers and small cells (signal relays) on pre-existing infrastructure.

Early in 2020, conspiracy theories about 5G technology were considered the greatest domestic threat to critical infrastructure, according to homeland security reports. As U.S. domestic intelligence agencies increasingly focused on the threat last April, anti-5G sentiments were already thought to be responsible for almost 200 attacks in the U.K. and the Netherlands.

Through the first half of 2020, there have been more than 80 attacks on cellphone towers in the two countries as well as over 100 additional incidents involving arson attacks on telecommunications infrastructure or cases where 5G workers were harassed.

In the United States, Tennessee has been a particular hotbed of anti-5G activity, leading the FBI to initially suspect that this was the motive for Anthony Warner’s intentional demolition of his RV in front of the AT&T building in downtown Nashville. Last December 4, according to reporting from the Bureau, arson caused an estimated $120,000 in damages after fire was set to several cellphone towers in the Memphis area, the first 5G physical attacks in America.

Through February 17, four additional 5G cell tower attacks occurred in Tennessee, and local fire departments investigated more than a half dozen additional arsons in March and April, many of the latter attacks now connected to COVID-19 and an anti-5G constituency obsessed with a 5G-COVID-19 connection.

The Fire Department of New York (FDNY) issued a “Watchline” report in April explaining that: “The online conspiracy consists of false information that 5G electromagnetic energy suppresses the immune system by breaking apart chemical bonds in DNA and that in the presence of bacteria can cause human cells to release free radicals.”

According to domestic threat reports, other 5G conspiracy theories suggest that the cell signal weakens the respiratory system, leaving people susceptible to becoming infected by the novel coronavirus.

As part of its reporting on COVID-19 “Disinformation Activity”, the Department of Homeland Security included anti-5G chatter and activity as growing and dangerous in May. Their reporting said the Internet was awash with “false narratives” that said that the technology “suppresses immune systems and that 5G spectrum bands spread the virus.”

Secretly, at the same time, the Department of Homeland Security was monitoring social media activity—including encrypted sites—which, they reported, were showing a marked COVID-related uptick in threats against 5G technology. On Twitter, suspected U.S.-based individuals were using the hashtag “burn them down” and threatening or inciting arson attacks.

“YOU THINK ITS A CORONAVIRUS OUT THERE ITS THE 5G TOWERS TAKE EM DOWN ‼️”, an April 8 DHS report quoted one social media poster as saying.

On May 12, the NYPD circulated a comprehensive “Law Enforcement Sensitive” threat warning on 5G, saying that “conspiracy theories about the purported dangers of 5G technology may increasingly resonate with racially and ethnically motivated violent extremists (REMVEs), anti-government malicious actors, and ideologically-unaffiliated individuals susceptible to disinformation campaigns.”

The report cited data from studies of online posts across Twitter, Facebook, YouTube, and other sites saying that there had been one million mentions between January 1 and April 20 saying that 5G technology actually caused COVID-19.

The report noted, “The data also indicated an overlap between anti-vaccination and 5G conspiracies, suggesting that some 5G conspiracy theorists may ultimately refuse a COVID-19 vaccine.”

Since then, the DHS’s Homeland Security Information Network, an intelligence-sharing platform, has circulated more than 400 reports on the threat of 5G conspiracies, almost all of them warning of conspiracy theories circulating amongst “far-right” users.

Those reports refer to the “Stop 5G” movement, the most prominent campaign against the technology of having more than 50,000-plus member across multiple social media platforms.

One such instigator in this movement is the so-called “Deep State Mapping Project,” which has compiled a 5G-focused COVID word chart and other infographics detailing 5G symptoms and claiming a vast conspiracy tying 5G to every other known theory and culprit.

And 5G has also become a rallying cry for COVID-19 naysayers, extremists and anti-vaxxers to whip up support for their causes or just to provide general chaos, the Department of Homeland Security says.

On May 1, a cell tower in the Philadelphia Navy Yard had a small, accidental fire caused by a transformer spark. Three days later, a U.S.-based anarchist group self-described as the “Bristling Badger Brigade” claimed responsibility, saying that it targeted the tower due to concerns over 5G.

The FBI concluded that this was a false claim, and that the group intended to spur others to attack telecommunications infrastructure.

A user on a U.S.-based neo-Nazi “Vorherrschaft Division’s” private Telegram group wrote that the health crisis “is the perfect time to launch a widespread psychological warfare campaign,” saying that fellow users should leverage “hysteria over 5G spreading” to stimulate panic and violence.

“We assess conspiracy theories linking the spread of COVID-19 to the expansion of the 5G cellular network are inciting attacks against the communications infrastructure,” the DHS Counterterrorism Mission Center reported in a “for official use only” report on May 13, predicting that such threats “probably will increase as the disease continues to spread, including calls for violence against telecommunications workers.”

But then, domestic security analysts say, the George Floyd protests and the presidential election shifted focus and energy away from the burgeoning anti-5G activity. Anti-5G postings began to be censored by the big social media companies.

Another “law enforcement sensitive” critical infrastructure threat report also called out “social media influencers and celebrities who have become adherents to these conspiracy theories and are spreading the message as well to their respective audiences.”

“The FBI’s assumption of a 5G connection wasn’t coincidental nor completely baseless,” a Homeland Security analyst told Newsweek. The analyst requested anonymity because he is not authorized to speak on the ongoing investigation. “But the anti-5G movement is strong, and its meld with anti-vaxxers and MAGA supporters is sure to cause many headaches in the months and years ahead.”