Flying taxis, which one day may whisk passengers around town without pilots, are getting a boost from the U.S. military. 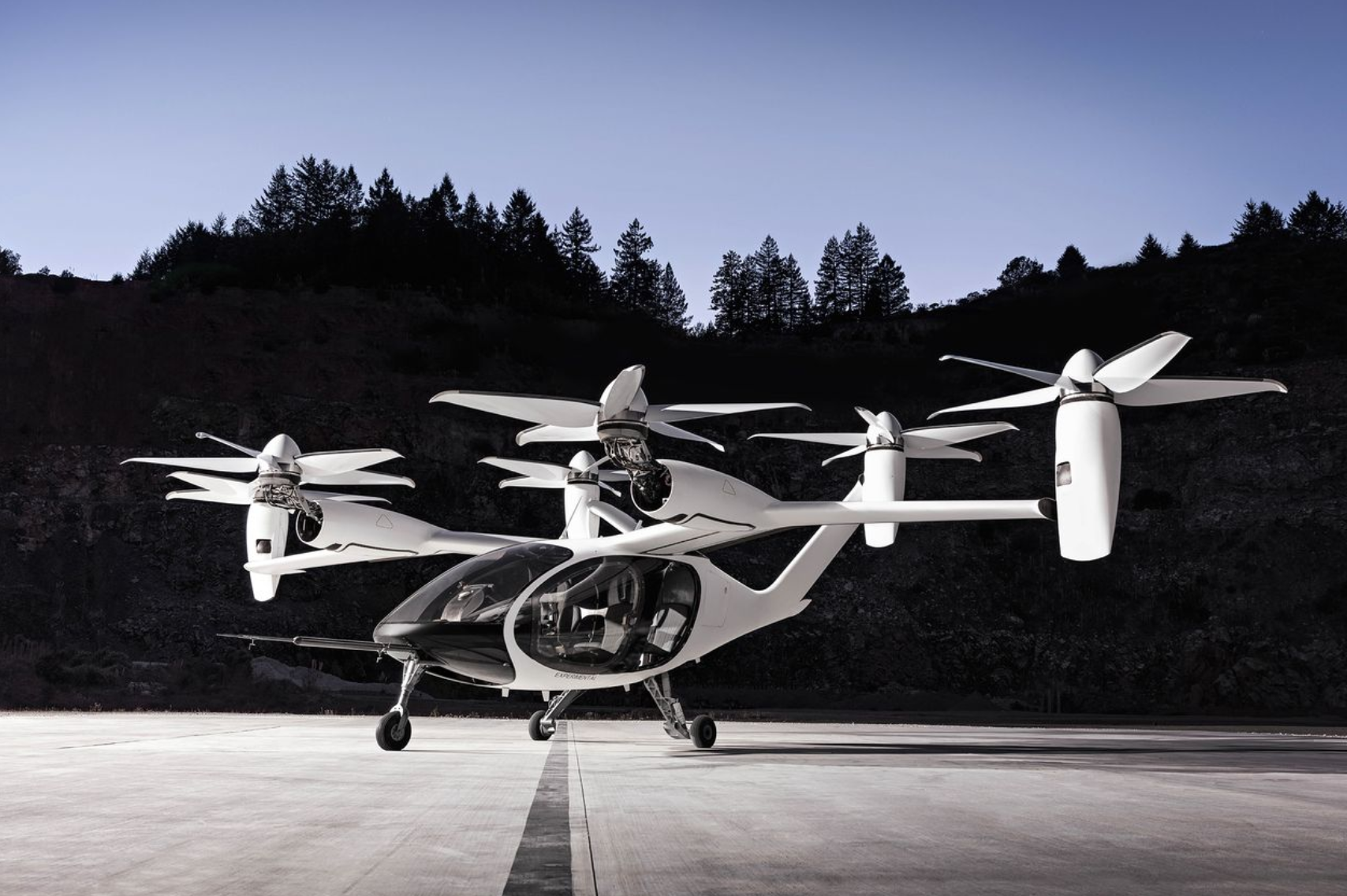 The Joby Aviation Vehicle, With Six Electric-Powered Tilt Rotors Above An Egg-Shaped Body Sized For Four Passengers, Is Lighter, Cheaper And Quieter Than Conventional Helicopters.

The Air Force has issued a first-of-its-kind safety endorsement of an electric-powered vehicle similar to a helicopter, opening the door to using such commercially developed equipment for military missions. This initial stamp of approval is meant to lay the groundwork for eventual civilian certification of the technology and even approval of autonomous flights crossing American cities, industry and military officials said. The current version does require a pilot.

For now, the impact of the Air Force’s decision, expected to be announced as soon as Thursday, is limited. It means Joby Aviation, a Northern California startup, will become the first maker of novel vertical-takeoff-and-landing craft providing transportation for the U.S. armed services.

The Air Force will help accelerate safety analyses by conducting flight tests, pledging to pay for contracts seeking to verify vehicle reliability and generally vetting the capabilities of vehicles through direct and indirect funding of the company.

The Air Force intends to help jump-start the budding industry to enhance American competitiveness. The process is expected to take years, but the race to develop air taxis already has attracted significant investments from companies including Boeing Co. , Toyota Motor Corp. , Hyundai Motor Group of South Korea and Airbus SE.

“We’re really competing with other nations to bring this technology to bear,” Will Roper, head of Air Force acquisitions, said in a recent interview. “Not just for military missions, but for all missions, including commercial ones.”

Based on the positive safety assessment, Joby’s vehicle will be contracted to carry cargo and people, as well as provide emergency rescue and other services, initially between military facilities in the U.S. and later around the globe. Ferrying freight among domestic locations connected by military airspace could begin as soon as early next year, according to Mr. Roper and others inside the Air Force.

The novel design features six tilt rotors above an egg-shaped body sized for four passengers, producing a vehicle that is lighter, cheaper and quieter than conventional helicopters.

In the future, it could be used for missions from slipping commandos into hostile territory to picking up injured pilots on the battlefield to carrying high-priority cargo to remote outposts, according to the Air Force. Other military services also will have a chance to assess the craft’s capabilities.

“This is about retooling our system to be commercially focused, commercially agile,” Mr. Roper said. He told an industry conference during the summer that the Air Force needs to be involved “wherever innovation is happening in aviation.”

Joby said it is “excited to partner with the U.S. government to accelerate testing, development and certification,” adding that the military’s safety and performance evaluation had determined the vehicle “meets Air Force standards for flight.”

At this point, the company won’t be authorized to fly in civilian airspace or offer broad commercial services, both of which require full-fledged safety certification by the Federal Aviation Administration. But industry experts, along with military and civilian government officials, see the Pentagon’s endorsement as an important step toward that goal.

Separately, earlier this week Joby said it intends to acquire the Uber Elevate unit of Uber Technologies Inc., as part of an expanded partnership between the two companies. The latest agreement also increases Uber’s investment in Joby to $125 million as the two companies pursue plans to integrate future ground and air travel options. On Wednesday, Joby said the Air Force and Uber developments seek to accelerate its timeline for offering services to customers.

The Pentagon plans to spend roughly $100 million annually to support flight tests and pay for actual transportation as part of the overall effort to assess Joby, which is funded partly by Toyota, and other companies working on novel airborne vehicles.

The long-term goal, according to Air Force Col. Nathan Diller, who will oversee testing and evaluation, is for the military to collaborate with industry and the FAA to ensure U.S. manufacturers snare a major share of the emerging air-taxi market. Pointing to China’s dominance in commercial drones, he said, “We can’t afford to do what we did with the small-drone industry.”

The Vertical Flight Society, a nonprofit group in Fairfax, Va., that promotes urban air taxis, says roughly $5 billion has been invested in the segment since 2014. National and local governments from Europe to Singapore are devising pilot projects to promote the technology. At least $5 billion more is likely to be spent on new-vehicle development in the next few years, according to Michael J. Dyment, managing partner of Nexa Capital Partners, which funds novel aircraft development.

Singapore Set To Have Flying Electric Taxi Service By 2023

Singapore is set to host the world’s first electric-powered air taxi service by the end of 2023, according to Volocopter GmbH, which is developing the vertical-takeoff craft.

The German manufacturer is committed to starting operations within three years once it completes flight trials, evaluation and certification in collaboration with the city-state, it said in a statement Wednesday. Tickets for a 15-minute trip costing 300 euros ($364) are already on sale.

Volocopter completed a demonstration flight over Singapore’s Marina Bay area in October last year, and the first commercial route is likely to fly tourists over the same district, offering spectacular views of the skyline, the company said. Later services could including cross-border journeys.

Singapore is at the forefront of plans to introduce flying taxis thanks to a more welcoming regulatory regime than in some other countries. While the craft could replace helicopters and light aircraft on some routes, they’d also be small and nimble enough to fly deep within cities and land with minimal space.

“Singapore is renowned for its leading role in adapting and living new technologies,” Volocopter Chief Executive Officer Florian Reuter said, adding that local capabilities in battery research, material science and route validation for autonomous operations will be central to the project.

Volocopter, which counts computer chip manufacturer Intel Corp. and automakers Daimler AG and Geely as investors, plans to set up a team of 50 pilots, engineers and operations specialists to support the Singapore flights.

The craft will initially carry a pilot and one customer, though services could switch to two passengers once approvals for autonomous operation are received. Ticket prices should fall sharply once flights become more widely available, according to Volocopter.

Obtaining necessary approvals from the Civil Aviation Authority of Singapore and the European Union Aviation Safety Agency will be a prerequisite for flights, the company said.

ADAC Luftrettung, part of the country’s leading motoring association, will begin testing the 18-rotor Volocopter GmbH aircraft from 2023 after the simulation of 26,000 emergency responses in two cities indicated that it could fulfill a rapid-transport role currently performed by a costlier helicopter fleet.

The joint announcement Tuesday provides further evidence of the commercial potential of vertical takeoff air taxis, coming less than a week after Singapore said it plans to launch the world’s first such service.

Germany may need more than 250 bases for the craft, according to ADAC, which plans to operate them alongside its choppers. Though the VoloCity model has no room for a third person in its cabin with the pilot and medic, only 25% of helicopter missions today require a casualty to be evacuated by air, it said.

Still, ADAC said that Volocopter, based in Bruchsal, Germany, might need to improve the model’s payload, a range currently limited to 22 miles, and its speed of 68 miles per hour to make a stronger business case.

Singapore plans to introduce air taxis via a venture with Volocopter by the end of 2023. Tickets for a 15-minute trip costing $365 are already on sale.

While regulations mean initial flights will feature a pilot, the manufacturer’s plans envisage that the craft will ultimately operate as a two-passenger drone.

The Federal Aviation Administration is considering a type-certification application from Volocopter, opening up the possibility of flights in cities such as Los Angeles, New York, San Francisco and Washington in the next two to three years, the company said in a statement Friday.

Volocopter plans to inaugurate commercial operations in Singapore by 2023, with tickets for 15-minute tourist flights already on sale for 300 euros ($360). The two-seat model, powered by multiple electric rotors, performed its first manned test in 2011 and has since completed more than 1,000 flights.

The company, whose backers include carmakers Daimler AG and Geely Automobile Holdings Limited, as well as logistics firm DB Schenker and the venture capital arm of chipmaker Intel Corp., is seeking FAA approval concurrent with an earlier application to the European Aviation Safety Agency, as well as Singaporean authorities.