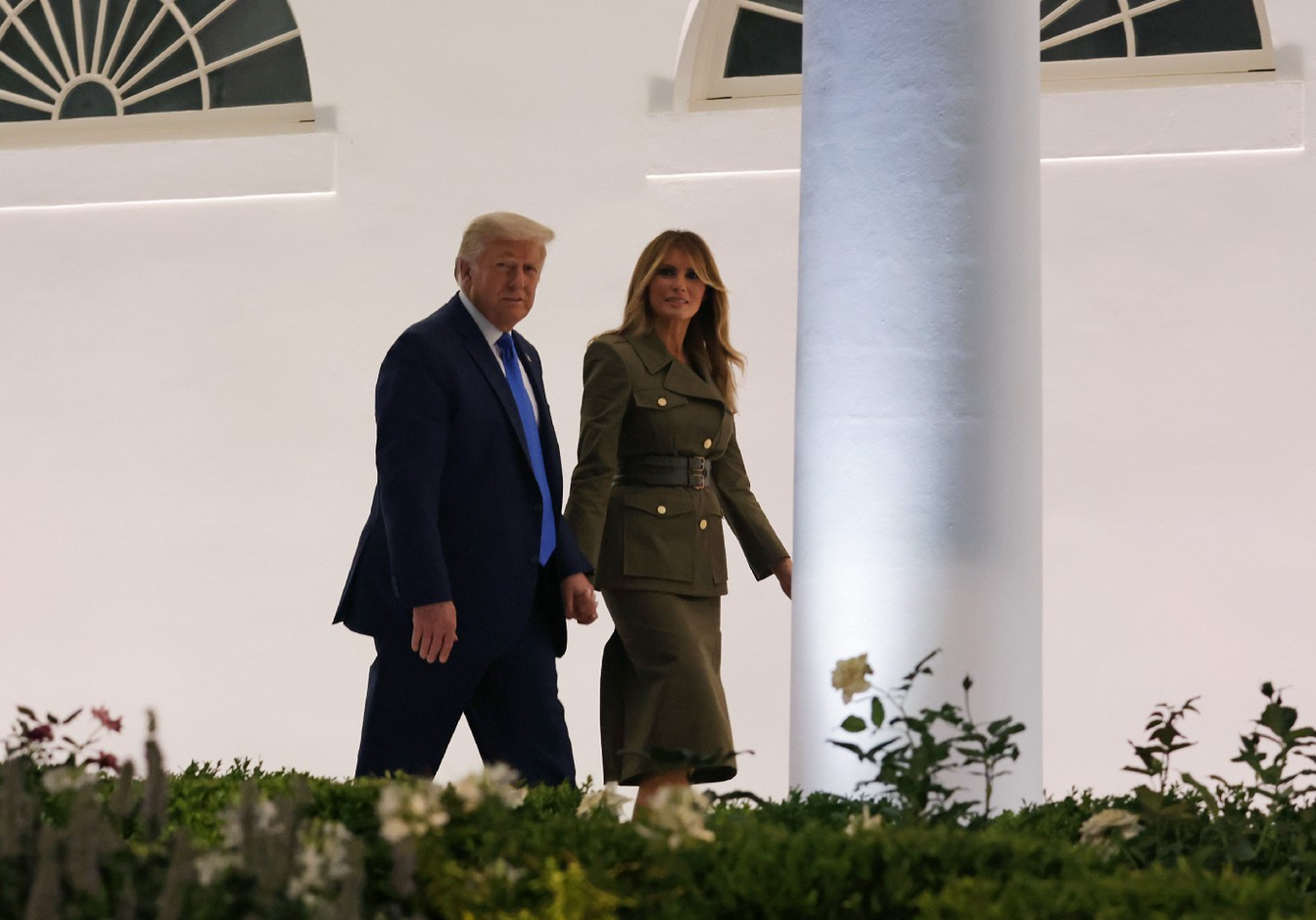 President Donald Trump And First Lady Melania Trump After She Addressed The Republican National Convention From The Rose Garden.

There’s No Coming Back From the Norm-Breaking at the RNC.

Only minutes before the Republican National Convention began on Tuesday, one speaker was removed from the program for sharing a grotesquely anti-Semitic thread laced with conspiracy theories. That wasn’t the weird part.

Instead, if the second night of the RNC is remembered for anything, it will be the seeming joy with which legally enforceable norms of American politics were swept away.

President Donald Trump—who said just last year, “I have an Article Two, where I have the right to do whatever I want as president”—put his panoply of constitutional powers to work as television programming for a partisan political convention.

First, Trump pardoned Jon Ponder, a convicted bank robber who found religion and started a nonprofit. Then, he participated in a naturalization ceremony of five immigrants with acting DHS Secretary Chad Wolf. Both events were held in the White House.

This follows videos of Trump meeting with frontline workers and freed hostages that aired as part of Monday’s programming, both of which were also filmed at White House.

That was norm-breaking in and of itself, and it may have implicated White House staffers in violations of the Hatch Act, which prohibits federal employees from engaging in some political activities. There is no precedent for a president engaging in official functions and explicitly conducting the business of being the nation’s chief executive as part of a partisan political convention.

Trump was not the only administration official to shatter norms this week. Secretary of State Mike Pompeo became the first person to hold his office in memory to address a political convention—and he did so in an address taped in Jerusalem from the roof of the King David Hotel.

Pompeo’s remarks seemed to violate not just the Hatch Act but State Department guidance issued this year that explicitly stated “Senate-confirmed presidential appointees may not even attend a political party convention or convention-related event.” His speech has already prompted a congressional investigation by House Democrats.

This is not to say that all of the program was norm-shattering. There was a primetime speech that elevated a rising star within the party, Kentucky Attorney General Daniel Cameron. There was an empathetic speech from first lady Melania Trump where she directly addressed the coronavirus pandemic. This, though, did take place in the recently renovated Rose Garden of the White House, in front of a crowd that included federal officials.

Trump’s use of the White House as scene, prop, and argument has shattered precedents and will likely reshape the scope and the powers of the presidency permanently.

Nearly four years after taking office, it’s clear this is not an administration committed to norms or legal niceties. The running tally of Hatch Act violations by Trump administration officials is hard to keep up with, and the Office of Special Counsel recommended over a year ago that top White House aide Kellyanne Conway be fired for her violations of the statute.

Needless to say, that never happened. The New York Times even reported over the weekend, “some of Mr. Trump’s aides privately scoff at the Hatch Act and say they take pride in violating its regulations.”

It’s difficult to imagine that voters, amid the pandemic, a recession, and ongoing cultural strife, will be motivated in November by Hatch Act violations.

After an evening in which the media was attacked by speaker after speaker, potential Hatch Act violations instead will serve primarily to “trigger the libs.” For the Trump campaign, the fact that the convention scenes from the White House will drive MSNBC pundits and CNN panels bonkers is in and of itself a win.

That it will also involve cable news channels repeatedly using b-roll footage of Trump pardoning an African American felon and welcoming a diverse group of immigrants as new Americans is a bonus.

Like many other actions taken by the Trump administration, his use of the White House as scene, prop, and argument has shattered precedents and will likely reshape the scope and the powers of the presidency permanently.

There will likely be formal legal complaints, outraged law review articles, and perhaps even an eventual faint slap on the wrist from a government watchdog in the future. But, for now, at a convention devoted to celebrating Trump, no one can stop him from using his Article Two.

Trump, The Law And Dis-Order President

Candidate and campaign that succeeds in framing the primary issue tends to be the one that wins.

Sports and military metaphors are overused in writing about politics, but here’s a military metaphor that fits the moment: In any battle, the advantage goes to the army that seizes the strategic high ground.

The battle for that high ground in 2020 is under way right now, and the outcome likely will be decisive.

For Joe Biden and the Democrats, the high ground is the coronavirus pandemic, a continuing crisis that they argue illustrates all that is wrong with Donald Trump’s presidency and leadership.

For them, the president’s failure to slow and stop the spread of the pandemic, and dodge responsibility for it, is proof that it is dangerous to live in his version of America.

For President Trump and the Republicans, the high ground is unrest in America’s streets, a continuing national trauma that they argue illustrates all that is wrong with the Democrats who run America’s biggest cities and what will be wrong with the country if Joe Biden becomes president. For them, Mr. Biden’s failure to forcefully condemn violence in the streets at his convention is proof that it will be unsafe in his version of America.

It’s a complicated race, but for right now it appears that simple. At the moment, Mr. Trump’s metaphor feels more powerful and urgent, and he plans to make it more so by traveling Tuesday to Kenosha, Wis., site of the most recent unrest. Yet there is a long way to go in a general-election campaign only just begun.

For his part, Mr. Biden pushed back hard Monday against the charge he tolerates violence by proclaiming in a speech that violence in the streets is “lawlessness, plain and simple. And those who do it should be prosecuted. Violence will not bring change.”

In any campaign, the most important question is the most basic one: What is it about? The candidate and campaign that succeeds in framing the answer to that question tends to be the one that wins.

Twice in recent history—in 1968 and 1980—the primary issue was a broad feeling that the wheels were coming off the national cart, that events were careening out of control in a frightening way. In both cases, Republicans took advantage of that feeling to win.

The difference in those cases, though, was that the Republican candidates elected those years—Richard Nixon and Ronald Reagan—were challengers, while Democrats were in control of the White House and trying to defend their response to turmoil.

President Trump is trying to pull off the reverse: He is the incumbent, the man on watch while the unrest unfolds, trying to win by saying the turmoil would be even worse if his opponents were in charge.

The point Democrats will be trying to drive home in coming days is that the violence Americans are seeing isn’t a vision of Joe Biden’s America to come, but the reality of Donald Trump’s America that already exists. In his Monday speech, Mr. Biden charged that the president has “fomented” violence.

The problem for Mr. Biden is that his failure to forcefully condemn looting and violence in the streets at the Democratic National Convention two weeks ago played into the narrative that he is too weak or too unwilling—or both—to stand up to radical forces within his own party that are fine with destruction in the streets of Portland, Ore., and Kenosha.

Mr. Trump has his own vulnerabilities, though, and they also are considerable. The first is that he has avoided talking in any detail about the racial inequalities that underlie the street protests.

There is ample evidence that even Americans in the political center troubled by street violence also are disturbed by examples of systemic racism that now are on the table for national discussion, and want those dealt with as well.

Beyond that, the coronavirus isn’t gone, and the 183,000 American deaths it has caused will never go away. Americans are being reminded of Mr. Trump’s handling of it in a dramatic way this week with the rocky efforts to reopen schools amid a pandemic.

Mr. Trump’s Republican convention last week was designed to provide a reassuring picture of Trump voters—“the real face of the silent majority” as Trump senior strategist Jason Miller put it in a Wall Street Journal video interview. But beyond that, it also was structured to give moderate, swing voters a feeling that it’s OK to vote for the president by providing them enough reason to think he isn’t racist, antigay or antiwomen.

The task for Mr. Biden’s campaign now is to do the same for moderate voters on the question of law and order: give them enough reason to feel it’s OK to vote for him because he won’t let mobs run loose in the streets.