The point isn’t that the cognitive test is easy. The point is that Trump keeps bragging about it. Trump Takes Cognitive Test And Can Identify A Rhino vs A Camel 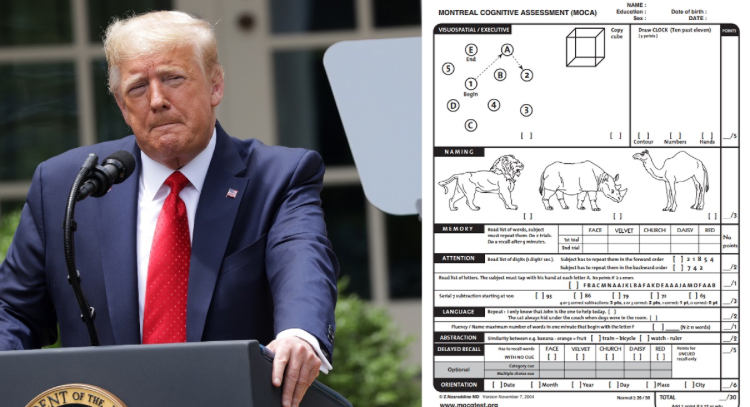 Let’s imagine a disease called H-itis. The disease has one consistent symptom: Those who have contracted it cannot say the letter H.

All a doctor has to do to determine if someone is suffering from the ailment, then, is to ask a patient to recite the alphabet. If they stumble after G or jump from G to I, that’s a pretty good indicator that the unfortunate soul has H-itis.

Were I to come up to you and ask you to recite the alphabet, you’d likely do so without issue. It wouldn’t even seem like a test, just that I were for some reason questioning your basic literacy. If I explained that it was a test aimed at determining if you had the aforementioned invented disease, you’d probably shrug and accept it.

The preceding paragraphs are a test of its own, really; a measure of your ability to translate odd hypotheticals into topical subjects in American politics. Here, of course, you have the added hint of the headline and the photo, meaning that you probably passed.

The H-itis analogy is meant to evoke the role of the cognitive test President Trump took in early 2018. It’s been mocked online for being easy — which, for most people it is. But as with reciting the alphabet, it’s not meant to be a gauge of intellectual performance or cleverness. Instead, it’s meant to use simple mental tests as a way of evaluating impairments.

For example, the test asks you to draw an analog clock showing 11:10 not to see if you’re smart enough to draw a clock but, instead, to evaluate whether there’s any impairment that would prevent you from doing so. To you and me (presumably), such a task is simple — because our brains can quickly work out how to complete the task. Draw a circle. Write the numbers in the circle. Add the hour and minute hands and done.

Each of those steps, though, measures some cognitive ability. The circle itself. The positioning of the numbers, which requires more planning ahead than you might consider. The placement of the hands from center to number. These are simple, discrete tasks that a normal brain can easily complete — as readily as one can recite the alphabet. If you have impaired cognitive functioning, though, it’s not easy at all.

Which brings us to Trump’s recent invocation of the cognitive test he took. The president and his allies have invested a lot of energy in questioning former vice president Joe Biden’s mental acuity, given the likelihood that Trump and Biden will face off in November.

At a news conference late last month, a Fox News reporter asked the presumptive Democratic presidential nominee if he had been tested for cognitive decline.

“I’ve been tested. I’m constantly tested,” Biden replied, apparently meaning in the abstract and not with specific tests like the one Trump took. “Look, all you’ve got to do is watch me — and I can hardly wait to compare my cognitive capability to the cognitive capability of the man I’m running against.”

When Trump called into Sean Hannity’s Fox News show last night, Hannity raised the interaction, showing a series of incidents in which Biden stumbled over words.

Trump, oddly, insisted that Biden must have meant tests for the coronavirus, which Biden clearly didn’t. But then Trump raised his own cognitive test.

“I actually took one when I — very recently, when I when I was, you know, the radical left was saying, ‘Is he all there? Is he all there?’ And I proved I was all there because I — I aced the test,” Trump claimed. “And he should take the same exact test. The very standard test; I took it at Walter Reed Medical Center in front of doctors.”

Trump then turned it up a bit.

“And they were very surprised,” Trump said of the doctors. “They said that’s an unbelievable thing. Rarely does anybody do what you just did.”

No. That did not happen. Or, at least, it didn’t happen without a qualifier like, “rarely does anybody your age not demonstrate any of the impairments this test is meant to measure,” which is possible. But the doctors did not call this “an unbelievable thing.” It would be like my fawning over your alphabet recitation: “Wow, you even nailed the L-M-N-O-P.”

Getting a perfect score is literally the baseline for being normal, not for being exceptional.

Trump can’t help it. If he does anything, he does it better than anyone. If he is being tested, his results are breathtakingly exceptional. If he is asked to draw a clock to measure whether he’s experiencing any cognitive deterioration — something worth tracking closely in part because his father died after being diagnosed with Alzheimer’s — then Trump will let you know that never has anyone drawn so amazing a clock.

He will tell you that the doctors marveled at the precision of his placement of the 6-7-8-9 stretch and stood slack-jawed at how precisely the minute hand aimed at the 2. This is who Trump is, a guy who builds a 58-floor building in Manhattan and tells everyone it’s 68 floors high.

After Trump’s interview with Hannity, people were quick to point out the flip side of his boast about the doctors: Having medical professionals be amazed that you performed normally on an evaluation of your cognitive abilities is not exactly the endorsement it might have seemed like as the words were coming out of Trump’s mouth.

Another reason boasting about the test probably wasn’t a good idea. Which, if you think about it, is kind of a test of its own.

President Trump on Thursday volunteered to Sean Hannity, the Fox News host, that he “very recently” took a test at Walter Reed National Military Medical Center measuring his mental acuity and “aced” it, but the White House would not say when he took it or why. 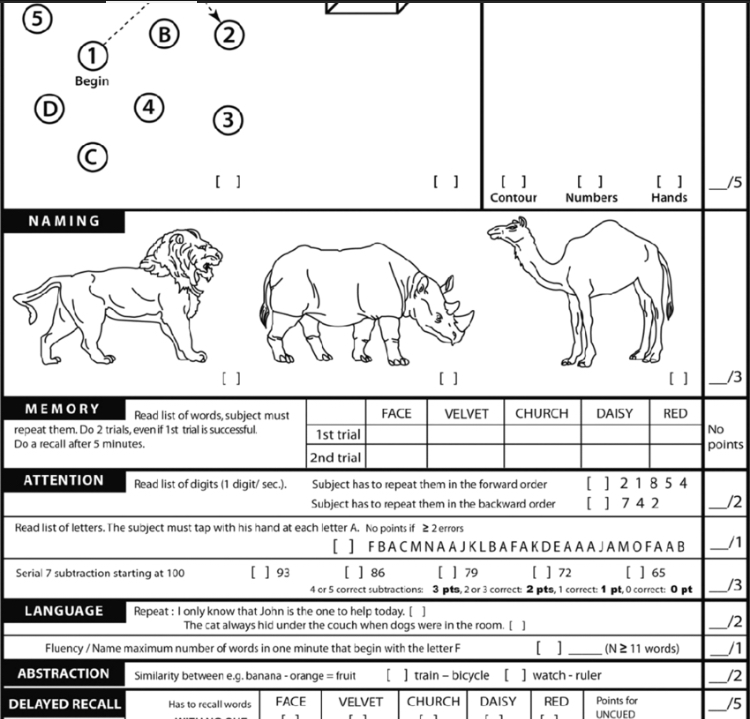 Mr. Trump boasted that his success on the test surprised his doctors as he continued his attempt to make a campaign issue of whether his presumptive Democratic opponent, former Vice President Joseph R. Biden Jr., was mentally fit.

“I actually took one when I — very recently, when I — when I was — the radical left were saying, is he all there? Is he all there? And I proved I was all there, because I got — I aced it. I aced the test,” Mr. Trump, 74, said in his interview with Mr. Hannity.

He went on to say that Mr. Biden should also take the test.

“And he should take the same exact test, a very standard test. I took it at Walter Reed Medical Center in front of doctors,” Mr. Trump said. “And they were very surprised. They said, that’s an unbelievable thing. Rarely does anybody do what you just did. But he should take that same test.” 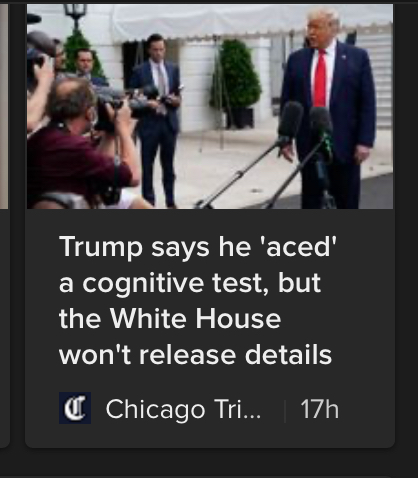 Aides to Mr. Trump did not respond to questions about what test he took, when he took it or whether they would make the results public. Over more than three years, the president has repeatedly faced questions about his own health, including why he made a mysterious visit to Walter Reed in November 2019 that White House officials later claimed was to get a jump on his annual physical.

After Mr. Trump’s most recent examination, Dr. Sean Conley, the White House physician, who examined him, said that “the data indicates the president remains healthy.”

But Dr. Conley’s summary was not the customary report Mr. Trump and other presidents have released immediately after an annual physical exam. Rather than one examination, the summary was based on an unknown number of medical appointments that included the visit to Walter Reed in November, and another from a checkup conducted in April at the White House.

After his annual physical in 2018, the White House physician at the time, Dr. Ronny L. Jackson, said that the president had received a score of 30 out of 30 on the Montreal Cognitive Assessment, a test that hospitals including Walter Reed use to screen for “mild cognitive dysfunction,” and that there was “no reason whatsoever to think the president has any issues whatsoever with his thought processes.”

Dr. Jackson said then that Mr. Trump had asked to take the test.

The Montreal assessment is a 30-question test that takes about 10 minutes to complete, and requires, among other things, that the test-taker identify pictures of animals, state the date, month, year and day of the week and repeat five words immediately and again a short time later. 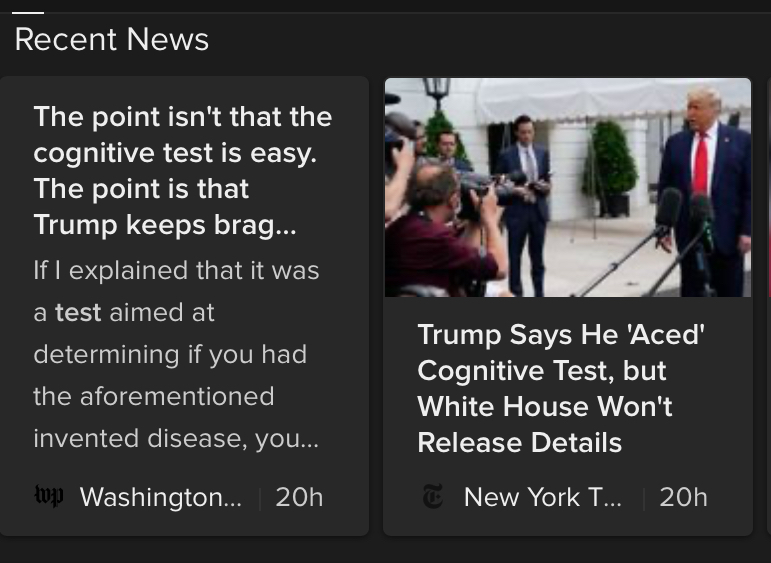 At a meeting of campaign and Republican officials several weeks ago at the White House, Mr. Trump boasted, according to a person familiar with what was said, about how well he had performed on the task of repeating five words. It was unclear when Mr. Trump took the test he was describing.

Since Mr. Biden emerged as his election opponent, the president and his advisers have tried to hammer home a message about whether, at age 77 and prone to gaffes, Mr. Biden is mentally capable of being president.

Andrew Bates, a spokesman for Mr. Biden, said the accusations were a product of Mr. Trump’s standing in the polls. “If the Trump campaign believes the answer to their precipitously dropping support is to triple-down on yet another smear that’s backfired on them for over a year,” he said, “then frankly, maybe it’s not just Donald Trump who’s missing something — but also his campaign’s ‘strategists’ who somehow still haven’t grasped that the ‘project, commit a self-own, then repeat’ model is accelerating their free fall.”

Private Republican polling has shown the attacks on Mr. Biden’s cognitive state have not done much to move the needle with voters, according to people who described the details of the surveys. And Mr. Trump is a difficult messenger for an attack on Mr. Biden as his own health has come under scrutiny.

That included an episode during a speech at West Point last month when the president had difficulty bringing a water glass to his mouth with one hand and then walked gingerly down a ramp to exit the stage. 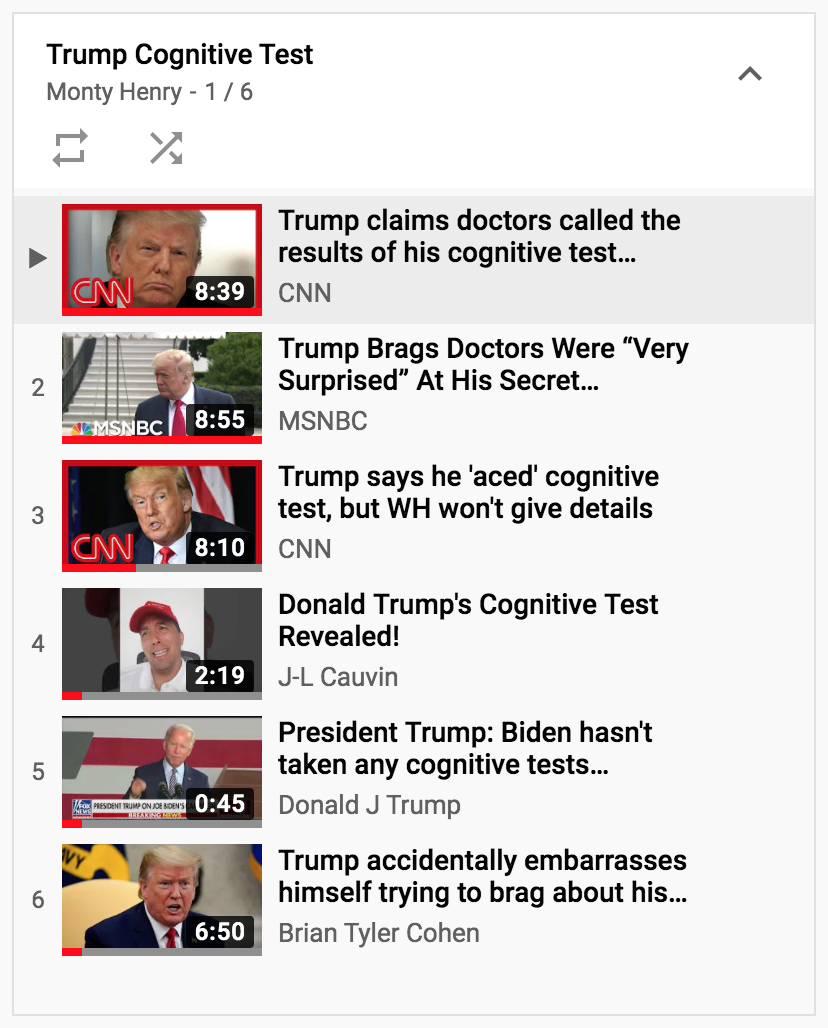 In response to the questions that followed, Mr. Trump lashed out on Twitter, insisting the ramp was slippery, and then he devoted more than 10 minutes of his rally in Tulsa, Okla., a week later to defend himself and insist he was healthy. The president described it to the crowd as a “journey” down the ramp and insisted the ramp was as slick as an ice-skating rink.

“I looked very handsome,” he said. “I wouldn’t want to run down the whole thing because the fall there would be definitely bad. So I took these little steps — I ran down the last 10.”

The video did not show Mr. Trump going any faster until the final three steps.