Trump Denies Report He Disparaged Military. Open Letter To Supporters of The Draft-Dodger-In-Chief!

How Low Can You Go? 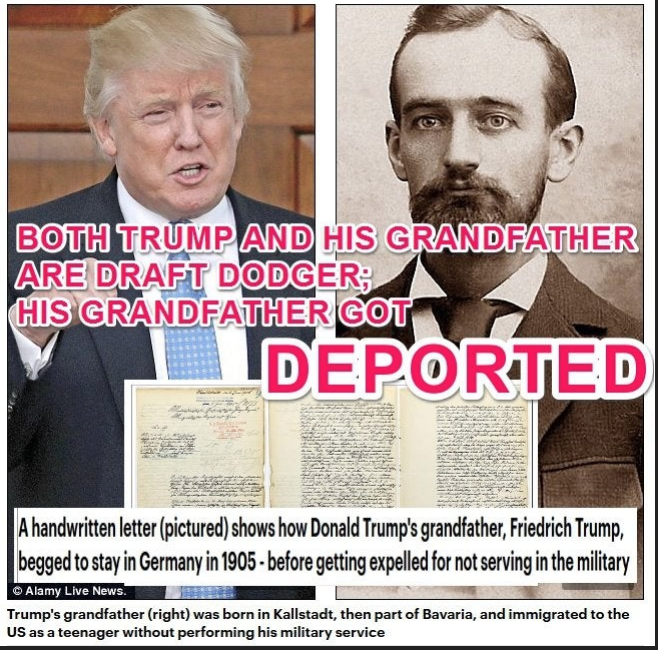 Trump’s Family Fortune Originated In A Canadian Gold-Rush Brothel
When Sen. John McCain, who endured beatings and solitary confinement as a prisoner of war for more than five years in Vietnam, died in 2018, Mr. Trump said: “We’re not going to support that loser’s funeral.”
In 2019, the White House wanted the U.S. Navy to move “out of sight” the warship USS John S. McCain, named for the senator’s father and grandfather, ahead of the president’s visit to Japan.
Donald Trump disparaged a fallen soldier’s parents. Khizr and Ghazala Khan, the parents of an Army captain killed in Iraq. He has suggested that the likes of their son should not be allowed in the United States — to say nothing of entering its service. I cannot emphasize enough how deeply I disagree with Mr. Trump’s statement,” McCain said. “I hope Americans understand that the remarks do not represent the views of our Republican Party, its officers, or candidates.”
No one has to compromise all of the morals and ethics for any reason.
Join the rest of us and find out what it’s like to hold your head up and stand for something rather than falling for what or whoever.

President and his aides push back on report by the Atlantic that he called Americans who died in war ‘losers’ and ‘suckers’.

President Trump and his aides rejected allegations in a news report that the president had called Americans who died in war “losers” and “suckers.”

The article published in the Atlantic on Thursday, attributed to four anonymous people with firsthand knowledge of the conversations, alleged that the president had canceled a visit to the Aisne-Marne American Cemetery near Paris in 2018 because he was concerned about his hair and didn’t believe it was important to honor Americans who died in the war.

“Why should I go to that cemetery? It’s filled with losers,” the Atlantic article quotes the president as saying.

The Wall Street Journal hasn’t independently confirmed the details of the Atlantic article. Adrienne LaFrance, executive editor of the Atlantic, said in a statement: “We stand behind our reporting.”

Late Thursday, Mr. Trump told reporters he had never made such comments and said the helicopter couldn’t fly to the cemetery that day because it was “raining about as hard as I’ve ever seen.” The White House attributed the cancellation to bad weather at the time.

“I would be willing to swear on anything that I never said that about our fallen heroes,” Mr. Trump told reporters on the tarmac after Air Force One touched down outside of Washington late Thursday. “There is nobody that respects them more.”

The president has made support for the military a central theme of his presidency and his re-election campaign.

The article also alleged that when Sen. John McCain, who endured beatings and solitary confinement as a prisoner of war for more than five years in Vietnam, died in 2018, Mr. Trump said: “We’re not going to support that loser’s funeral.”

On Thursday, Mr. Trump said he disagreed with Mr. McCain on several issues and that “I was never a fan.” But, he said, “I still respected him. And I had to approve his funeral as president…I approved it without hesitation, without complaint. And I felt he deserved it.”

Miles Taylor, former chief of staff at the Department of Homeland Security under the Trump administration, in a tweet Friday morning disputed the president’s assertion that he had agreed to lower the flags after Mr. McCain’s death “without hesitation or complaint.”

“Mr. President, this is not true,” tweeted Mr. Taylor, who has been a vocal Trump critic since leaving the administration. “You were angry that DHS notified federal buildings to lower the flags for Sen. McCain. I would know because your staff called and told me.”

It took until 4 p.m., two days after Mr. McCain’s death, for the White House to issue a statement from the president announcing the flag would be flown at half-staff.

In 2015, during his presidential campaign, Mr. Trump said of Mr. McCain: “He’s not a war hero. He was a war hero because he was captured. I like people who weren’t captured.”

In 2019, the White House wanted the U.S. Navy to move “out of sight” the warship USS John S. McCain, named for the senator’s father and grandfather, ahead of the president’s visit to Japan, the Journal reported.

Since Mr. McCain’s death in 2018, Mr. Trump has continued to attack the senator. The president complained that he wasn’t thanked for giving Mr. McCain “the kind of funeral that he wanted” and saying at an event in Lima, Ohio: “I have to be honest, I’ve never liked him much.”

The Trump campaign on Friday published a list of statements from current and former White House aides rebutting the Atlantic article. Former press secretary Sarah Sanders called it “total BS.” Dan Scavino, deputy chief of staff for communications, said he was with the president in France and called the article “complete lies.”