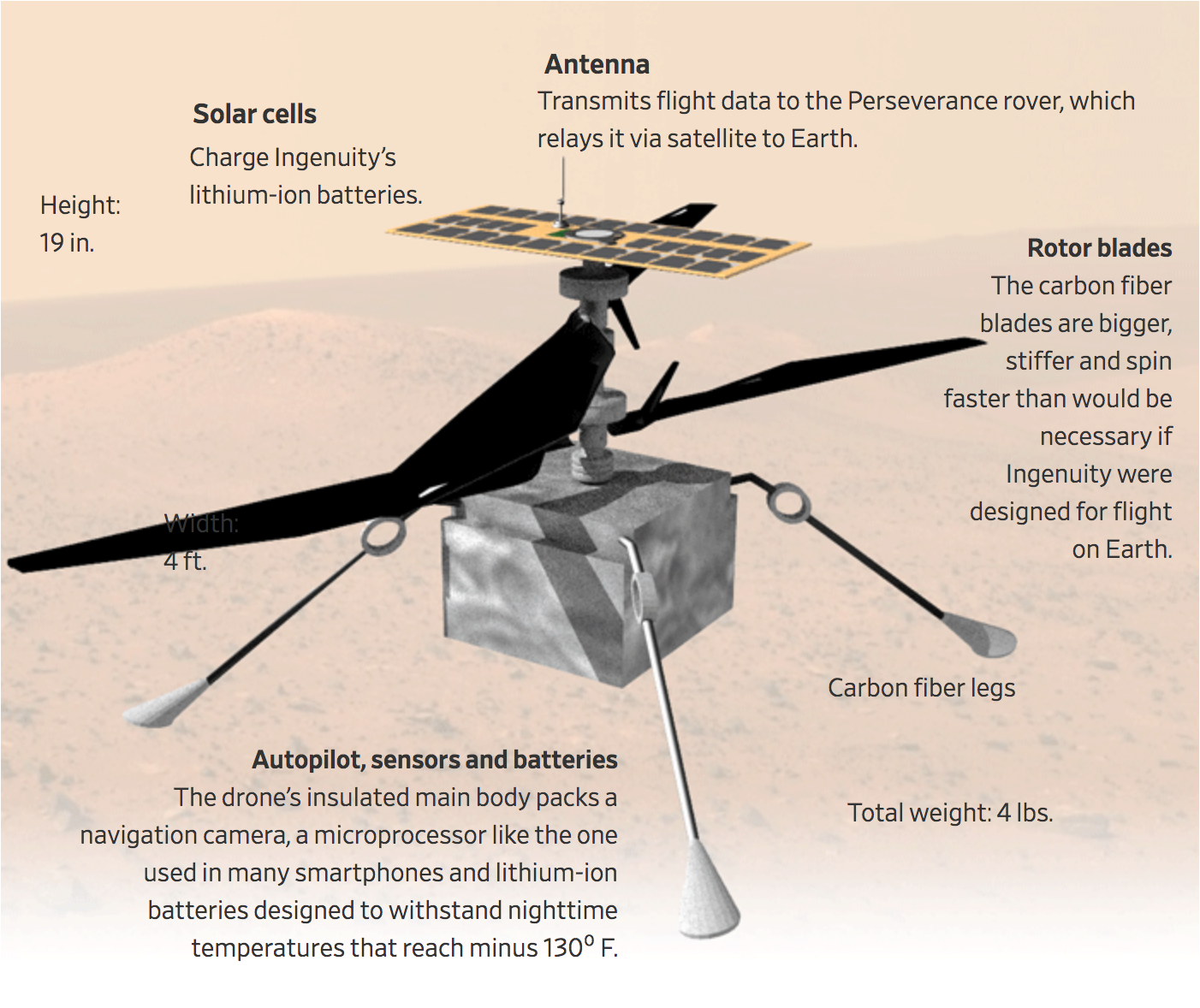 Overcoming extreme cold, dangerously thin air and flawed flight software, the $85 million autonomous copter spun its twin carbon-fiber rotor blades to rise about 10 feet into the thin Martian air. It hovered briefly in the breeze before safely landing at about 3:34 am ET Monday back on the ground, NASA officials said. They plan up to four more flights during the next two weeks.

As flight data streamed from Ingenuity to Earth on Monday, mission engineers at NASA’s Jet Propulsion Laboratory in Southern California cheered and clapped.

“It’s real. It’s real,” said Ingenuity project manager MiMi Aung, slapping the table in front of her with glee and showing a thumbs-up. “We can now say human beings have flown a drone on another planet.”

Ingenuity arrived at Mars’s Jezero Crater in February along with NASA’s Perseverance rover, which was on hand to capture the historic flight on camera.

The drone—stiff-legged and smaller than a picnic basket—was designed as an engineering experiment to prove that powered flight is possible on the Red Planet and to help NASA plan for a future in which drones play a key role in planetary exploration.

Such drones could one day provide access to terrain that is too remote or rugged for rovers to reach—like Mars’s Valles Marineris, the largest canyon in the solar system, or its Olympus Mons shield volcano, which is about 2.5 times the height of Mount Everest.

“It’s the next step in expanding our capabilities to explore another planet,” NASA acting administrator Steve Jurczyk said of Ingenuity. “A helicopter could be used as a scout for robotic missions to look over the horizon and eventually as a partner for astronauts on Mars.”

Ingenuity was on autopilot for its entire flight, out of sight, direct control or contact with the men and women on Earth who had ordered it aloft. Radio signals take too long to travel between the planets for any human operator to intervene.

No conventional aircraft could fly on Mars because the Martian atmosphere is too thin. To enable Ingenuity to fly there, NASA engineers gave it ultra-light, compact parts and rotors capable of generating enough lift to carry it aloft. Ingenuity’s rotor blades spin five times faster than those of a conventional helicopter.

On Sunday, Ingenuity’s chief pilot, Håvard Grip, and his colleagues at the Jet Propulsion Laboratory had transmitted commands across 173 million miles of space to set Ingenuity’s flight in motion. Given the time lag in radio transmissions resulting from the relative positions of Earth and Mars and the satellites sending back the data, the controllers had no way of knowing that the flight was a success until almost 16 hours later when the flight data trickled back to Earth.

They timed the flight for around midday Mars time when the winds in Jezero Crater were expected to be at their lightest.

“We upload the commands we want to run, and then we die inside for hours waiting to learn what happened,” said Ingenuity lead operations manager Tim Canham. “Then, when all the data comes back, we frantically get online and look at it to make sure that everything went the way we wanted it to go.”

On Monday, Dr. Grip and his colleagues analyzed the altitude and position measurements from the helicopter’s laser altimeter and sensors to confirm that Ingenuity had actually flown as intended.

The history-making flight was the latest milestone in Mars exploration this year. In February, the United Arab Emirates successfully put its $200 million Hope spacecraft in orbit around Mars to begin a two-year weather mission. Days later, a Chinese probe named Tianwen-1 entered Mars orbit. China plans to land its first rover on the surface there sometime in May or June.

The Hope and Tianwen-1 missions are the first forays to the Red Planet for both countries. They joined spacecraft already in orbit there from the European Space Agency, the U.S. and India. NASA also has two other active missions under way on the surface, in addition to Perseverance.

The thin carbon-dioxide atmosphere of Mars posed a special challenge, Ingenuity engineers said. The air at the Martian surface has the same density as air at an altitude above Earth of about 22 miles—far beyond the operating range of any conventional helicopter. The thin Martian air made it hard for Ingenuity to generate sufficient lift and to control its rotor blades—and hard to dissipate the heat generated by the tiny motors that power the rotors, the engineers said.

“What we didn’t fully appreciate initially is how much that density changed the way the vehicle handled,” Dr. Grip said. “It would be like riding a bicycle with grocery bags hanging from the handle bars, swinging back and forth. In other words, when you try to control it, you don’t get a crisp clean response. You get a sluggish, oscillatory response, what we call flapping.”

To survive its long journey from Earth to Mars, Ingenuity traveled aboard Perseverance folded up like an ironing board in a compartment on the rover’s underside.

After landing safely, the drone cautiously unpacked itself and then charged its solar-powered batteries, which are needed not only to fly but to power heaters that protect the drone’s fragile components. NASA engineers had worried that it might not withstand night-time temperatures that can plunge as low as minus 130 degrees Fahrenheit.

Ingenuity survived the bitter cold. A flaw in its autopilot software, however, forced NASA to cancel its first flight attempt on April 11, when the craft abruptly shut itself down during its final preflight check, NASA officials said.

A flaw in just a few lines of Ingenuity’s 800,000 lines of flight code caused the tiny drone’s onboard computer to wrongly conclude that the software had malfunctioned and aborted the flight test, the officials said. The system had been performing normally when the shutdown occurred.

NASA engineers had tested the software thoroughly before Ingenuity left Earth but had failed to detect the problem, in part, because they were afraid to run the rotors at their full flight speed of 2,400 rpm in Earth’s denser atmosphere. “We did not want to spin the rotors above 75 rpm on Earth because we’d actually destroy them because the density is so high,” said Robert Braun, JPL director for planetary science. “It’s an insidious problem.”

The flaw required only a few new commands to fix, the officials said. But even a simple software update can take days when tech support is 173 million miles away.

Once Ingenuity completes its scheduled flights, Perseverance is expected to begin a two-year search for signs of past life on Mars. The rover will cache soil samples for eventual return to Earth by a series of retrieval missions carried out jointly by NASA and the European Space Agency.

“Right now, the target is to launch the sample return mission in 2026,” Dr. Jurczyk said.

Barring the unforeseen, NASA engineers will attempt to launch Ingenuity on its second flight in about four days, then conduct one additional flight every three days. “We will be taking bolder and bolder flights,” Ms. Aung said. “We are going to be very adventurous.”