The brief excursion could help usher in a new era of space exploration in which drones play a vital role. NASA’s Ingenuity Mars Helicopter Gets Set For Historic First Flight On Another World

In a hardscrabble crater on Mars, a tiny helicopter with a smartphone brain is now days away from attempting the first powered flight on another world. NASA hopes its spindly robot copter, named Ingenuity, will prove that powered flight is possible in the perilously thin Martian air and help usher in a new era of planetary exploration in which drones play a vital role.

Ingenuity reached Mars like a stowaway, folded up on the underside of NASA’s Perseverance rover, which landed on the red planet in February after a seven-month, 293-million-mile voyage from Earth.

For its maiden flight, the 4-pound, $85 million craft will simply rise about 10 feet above the surface and hover—no higher than the rim of a regulation basketball hoop—before returning to the surface. The whole flight should be over within 90 seconds.

The brief excursion—one of five planned for a one-month period expected to start on or about April 11—is a short hop by the measures of interplanetary travel. But agency officials said it would be a giant leap for Mars exploration.

In the future, they said, autonomous drones like Ingenuity could take to the skies to explore canyons, ice caps and other terrain that is inaccessible to rovers. Should human explorers ever land on Mars, drones could serve as scouts and aerial sensors.

NASA’s robotic helicopter will soon attempt the first powered flight on another planet. Ingenuity flies autonomously and has special features to help it stay aloft in the thin Martian atmosphere. Given the lag in communications, NASA won’t learn if Ingenuity’s historic flight was successful for up to eight hours after the attempt.

“We are hoping that Ingenuity allows us to expand and open up aerial mobility on Mars,” said Bob Balaram, the project’s chief engineer at NASA’s Jet Propulsion Laboratory in Southern California.

The flight of Ingenuity, part of a broader mission to seek signs of past life on the red planet, is the latest in a flurry of notable Mars moments this year.

Missions from China and the United Arab Emirates also reached Mars in February, joining spacecraft from India, the European Space Agency and the U.S., all of which are actively studying the desert planet from space. In addition to the Perseverance mission, NASA has two science missions now exploring the surface.

The Emirates’ $200 million Hope orbiter—the Arab world’s first interplanetary probe—is conducting a two-year weather study. China’s orbiting Tianwen-1 probe carries a rover, which is expected to descend to the Martian surface in May or June.

To create the solar-powered Ingenuity, NASA engineers took advantage of recent advances in lithium batteries, cameras, microprocessors and computer software—and took into account the extreme conditions they knew the craft would encounter. 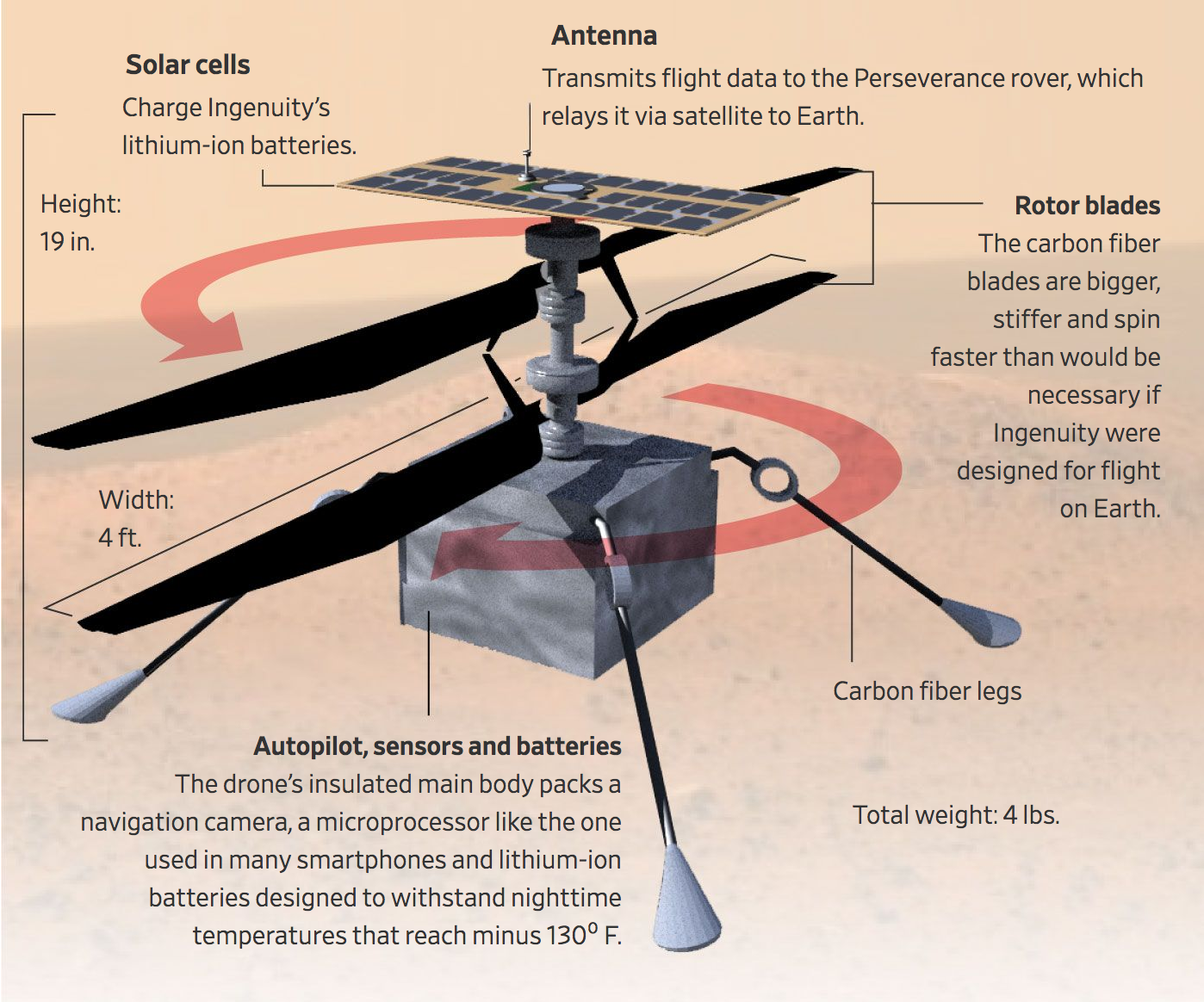 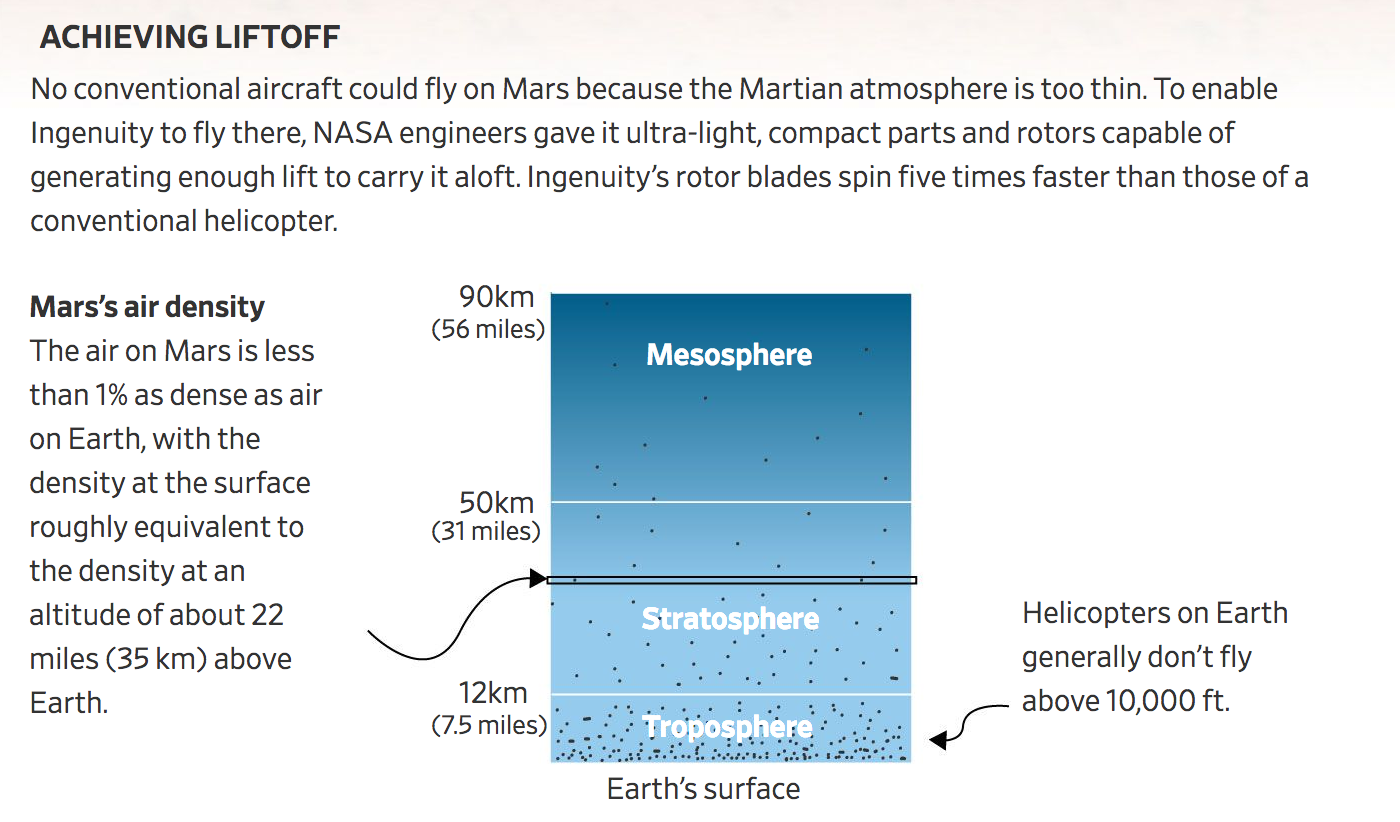 The helicopter had to be featherweight yet sturdy enough to withstand the shake, rattle and roll of a rocket launch and the violent descent to the surface. It also had to be able to survive the extreme freeze and thaw cycles in deep space and on Mars.

“It isn’t just a helicopter; it’s also a spacecraft,” said Ben Pipenberg, an aeromechanical engineer at AeroVironment Inc. in Simi Valley, Calif., a specialty drone and tactical missile company that helped design and build Ingenuity. “Combining those requirements was the challenge. In some ways, it’s like trying to build a tractor to compete in a Formula One car race.”

One big challenge for the Ingenuity team was creating a craft capable of generating lift in the rarefied Martian atmosphere, which is only 1% as dense as Earth’s. The copter has four carbon-fiber rotor blades that spin in opposite directions at 2,400 revolutions a minute—roughly five times faster than a conventional helicopter’s.

The 4-foot-long rotors are powered by six motors, each of which took a technician 100 hours working under a microscope to assemble. The pint-size power plants generate so much heat that Ingenuity can fly only 90 seconds before they risk a meltdown, project engineers said.

Another challenge was giving Ingenuity the ability to fly without human control, which is impossible given the 12 minutes it takes radio signals to cover the vast distance from Earth to Mars. To fly steadily in the unpredictable gusts of Martian wind, Ingenuity’s onboard computer must adjust the copter’s position 500 times a second, navigating by using continuously updated ground images to chart its path. All told, the drone’s software runs to about 800,000 lines of code, project engineers said.

“We needed a processor that was both very compact, weight-wise and size-wise, and also very powerful,” said Tim Canham, Ingenuity’s lead operations manager at the Jet Propulsion Lab. “The classic processors that they fly on the rover, for instance, are just not powerful enough or compact enough to do the job for us.”

So NASA went with a microprocessor designed for consumer electronics, which NASA engineers said is 150 times more powerful than any the agency has launched to another planet. Made by Qualcomm Inc., the device packs a billion transistors into its tiny silicon wafer and comes with a popular open-source operating system called Linux already installed.

That is the same operating system that runs most of the internet and many of the world’s supercomputers and stock exchanges. 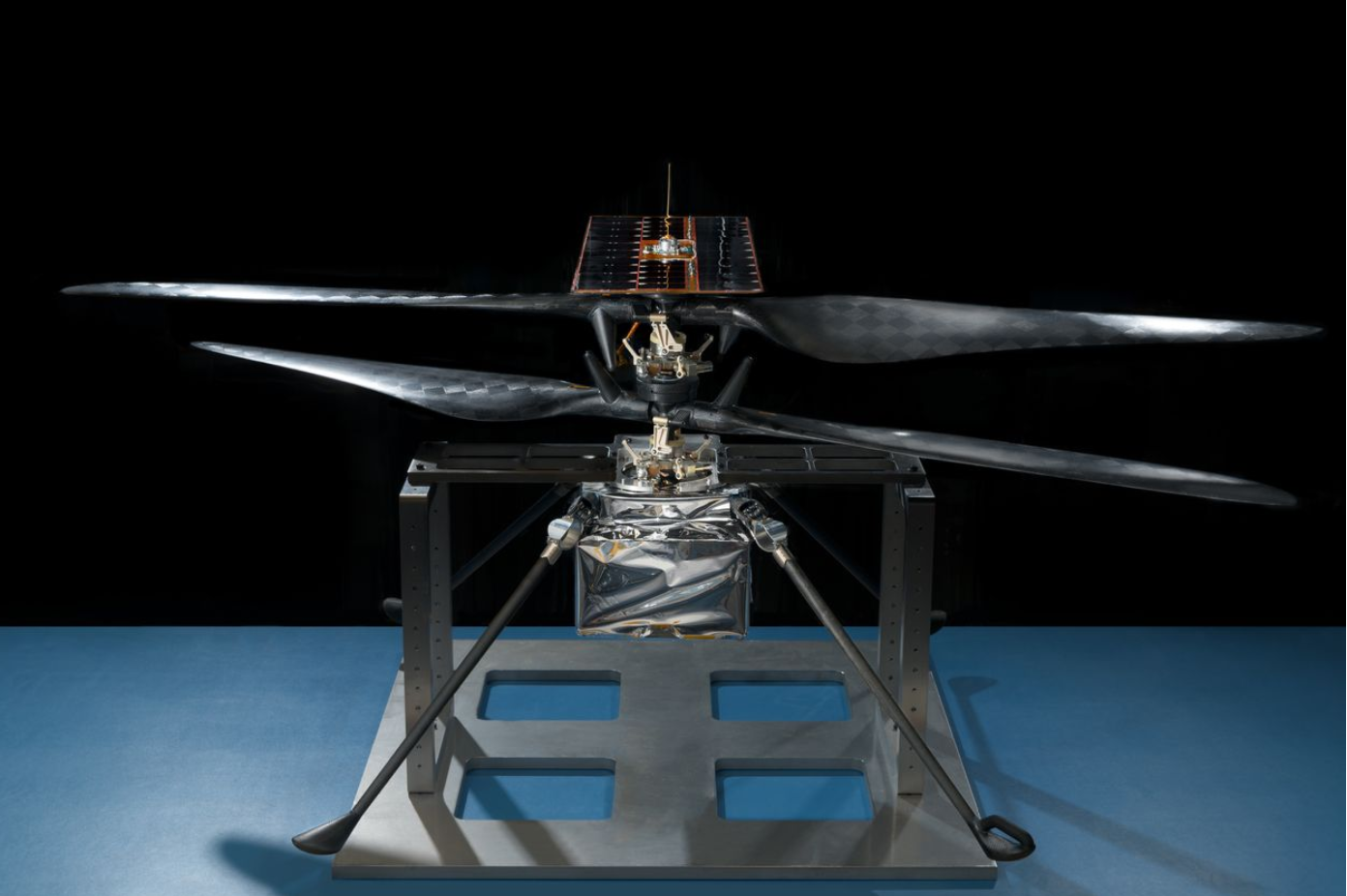 The Helicopter Had To Be Featherweight Yet Sturdy Enough To Withstand A Rocket Launch And The Violent Descent To The Surface.

“This is the exact same processor that went into a lot of consumer smartphones,” said Dev Singh, Qualcomm’s general manager of robotics, drones and intelligent machines.

By comparison, the radiation-hardened Power PC chip used in the Perseverance rover and about 150 other NASA spacecraft in the past few decades contains around 10.4 million transistors. 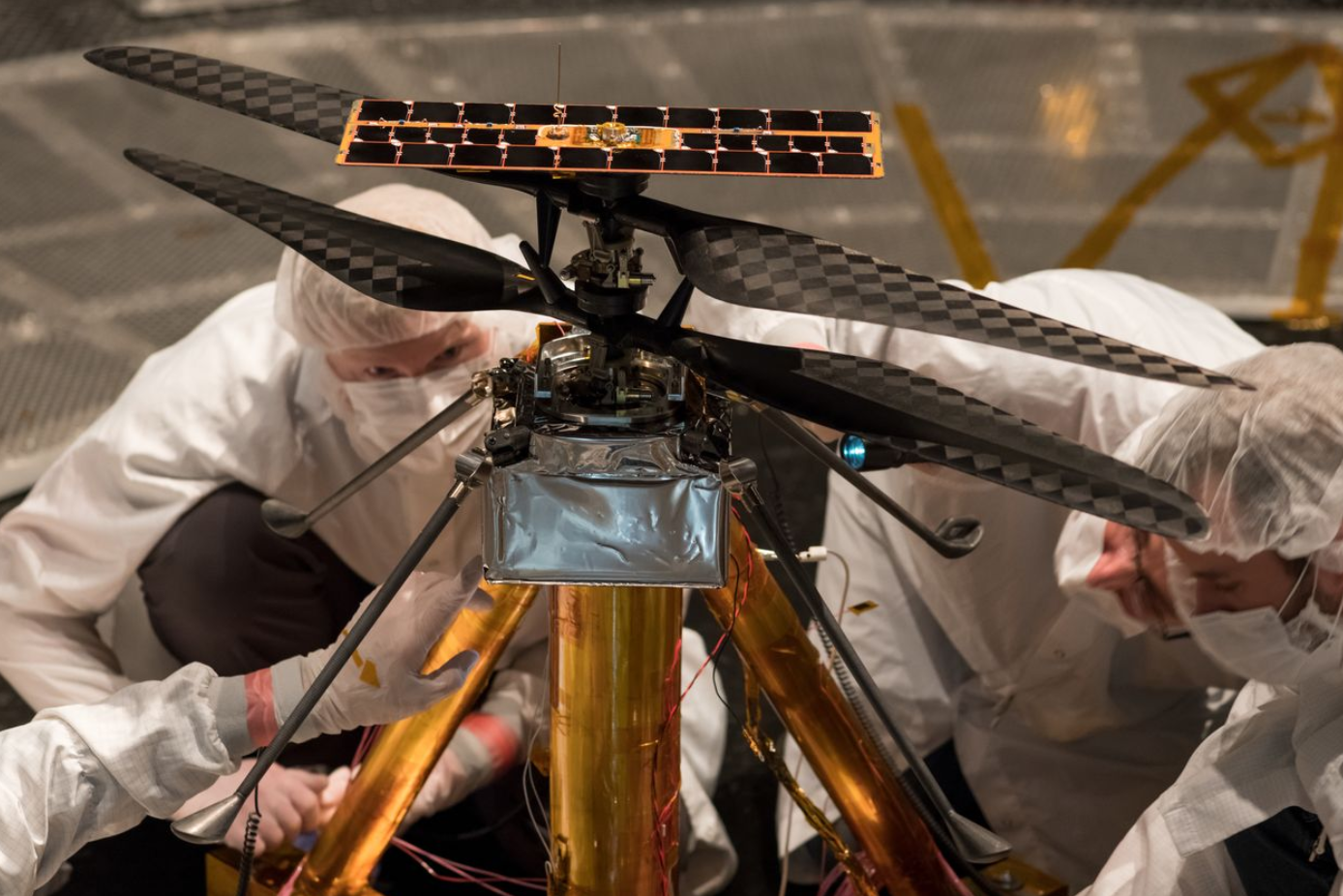 Members Of The NASA Mars Helicopter Team Inspecting The Flight Model Inside The Space Simulator In Pasadena, Calif., In Early 2019.

In recent days, Ingenuity has been unpacking itself in preparation for launch, dropping one carbon-fiber leg after another until its four struts were locked in position for an upright stance. By Friday it was ready to be positioned on a carefully selected patch of Martian soil that will serve as its makeshift helipad.

Once its batteries are fully charged, NASA engineers will perform preflight system checks for several days. Plans call for the Perseverance rover to retreat to a nearby overlook, where it will photograph the coming flights.

However well it performs on Mars, Ingenuity has already made a difference on Earth, project engineers said.

NASA officials have likened Ingenuity to the Wright brothers’ Flyer, which in 1903 made the first controlled, powered flight on Earth—a 12-second, 120-foot trip that opened the way to airmail, passenger jets and frequent-flier miles. In homage to that flight, Ingenuity carries a swatch of fabric from the Flyer on the underside of its solar panels.

Scientists To Use Crspr To Bring Woolly-Mammoth Back To Life