Why Growth In The Fed’s Asset Portfolio Has Paused (#GotBitcoin?)

That doesn’t mean the central bank has dialed back its support for markets or the economy. Why Growth In The Fed’s Asset Portfolio Has Paused (#GotBitcoin?) 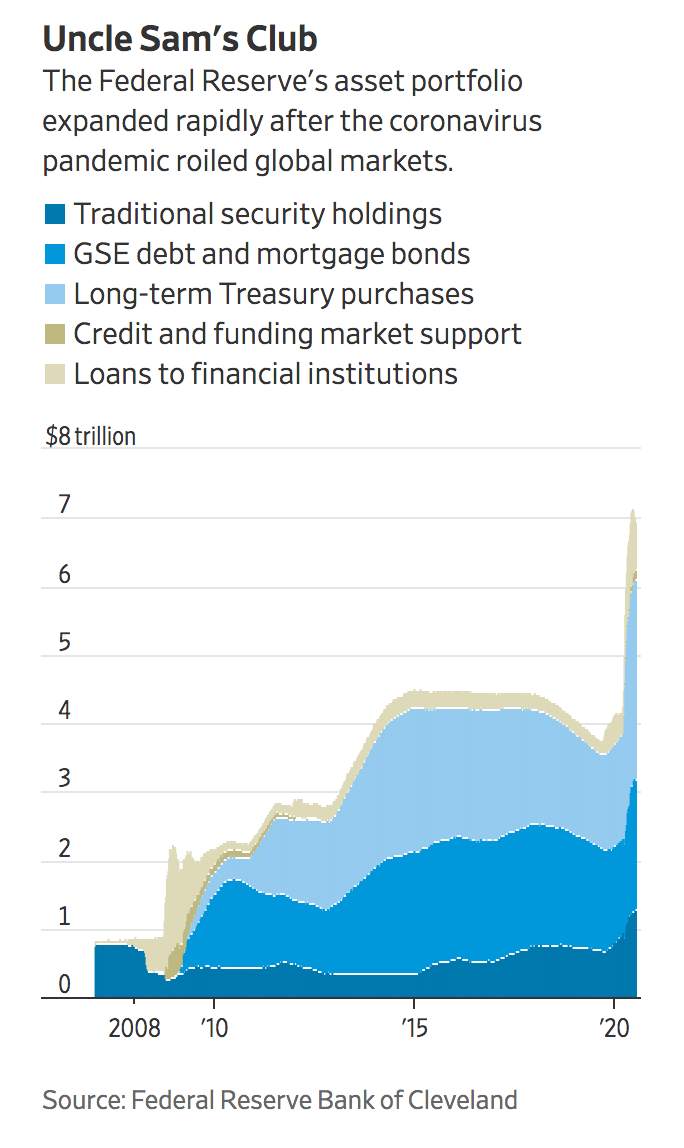 The Federal Reserve’s asset buying is taking a summer break after surging in the spring, but that doesn’t mean the central bank has dialed back its support for markets or the economy.

The Fed’s holdings of bonds, loans and other assets reached $7 trillion in June, up from $4.2 trillion in February, reflecting multiple financial-assistance programs launched in response to the coronavirus pandemic.

Analysts are lowering their estimates of further growth to reflect less demand for emergency credit as market conditions improve and because the newest lending programs are proving more difficult or costly to use.

Economists surveyed by The Wall Street Journal this month projected the Fed’s asset portfolio, or balance sheet, to end the year at $8.7 trillion, versus their May estimate of $9.3 trillion.

The pause in the portfolio’s growth coincides with a policy transition at the Fed. Officials at their July 28-29 meeting are likely to intensify deliberations over how to support the economy following an initial crisis-fighting phase, which focused on stabilizing markets that went haywire in March when the pandemic upended U.S. and global commerce.

The slowdown in the Fed’s portfolio growth reflects these pressures fading. The central bank this month had no takers for short-term overnight loans called repurchase agreements, down from more than $440 billion in March. Arrangements where the Fed lends dollars abroad via currency “swaps” with foreign central banks declined to $122 billion last week from $449 billion in May.

Second, the Fed stepped in as a market maker of last resort by purchasing Treasurys and mortgage-backed securities when fire sales of these normally supersafe assets overwhelmed Wall Street dealers. The Fed has bought $2.5 trillion in Treasurys and mortgages since March, accounting for most of the portfolio expansion.

It has slowed the pace of purchases but has still been buying at a rate of more than $1 trillion a year, which means the asset portfolio will keep growing.

Third, the central bank backstopped an array of credit markets, interventions that brought officials well past the central bank’s comfort zone. The Fed is purchasing corporate bonds, loans to small businesses, and short-term debts of counties and states with the Treasury providing almost $200 billion to cover losses.

“Alan Greenspan of 1995 would not recognize a lot of what the Fed is doing,” quipped former Fed Chairman Ben Bernanke in a webinar earlier this month, referring to his predecessor.

Analysts’ balance sheet projections have declined because this third category of lending is falling short of expectations. These programs would allow for nearly $3 trillion in borrowing. The Fed bank has so far extended $104 billion. 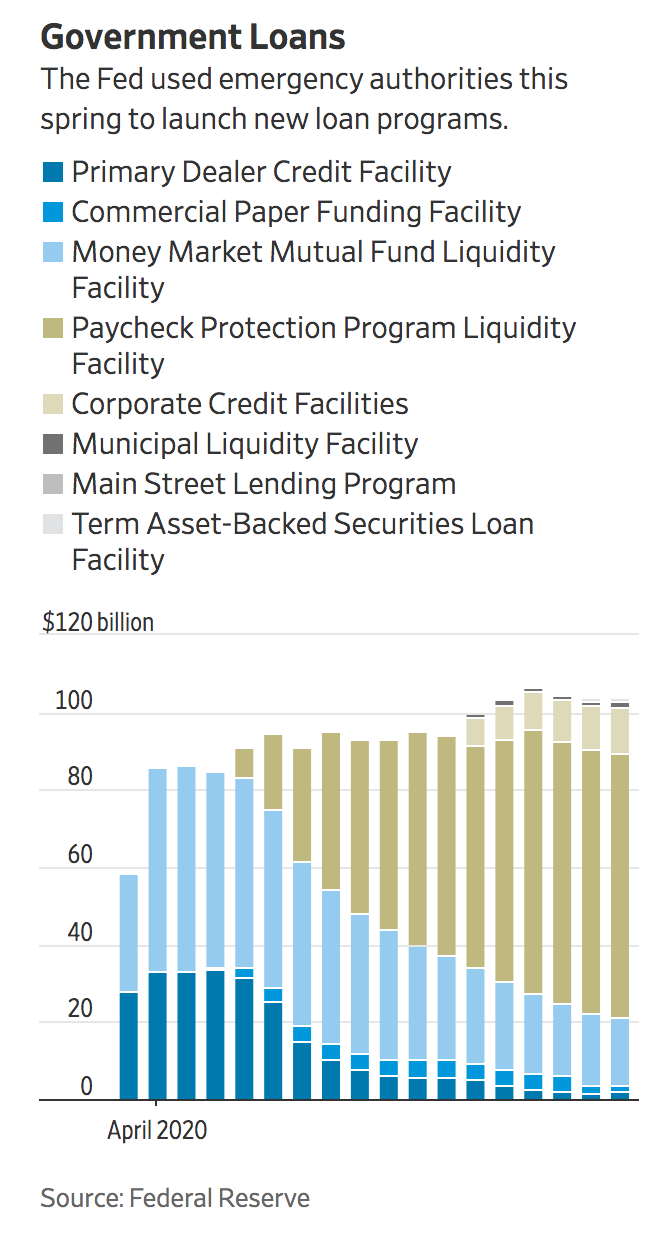 In some cases, such as the Main Street Lending Program for small and midsize businesses, low uptake reflects complications the Fed and Treasury encountered launching the program and enticing banks and borrowers to use it. For others, lower volumes reflect the success the mere announcement of the Fed backstops have had in spurring private investors to buy assets.

“Looking at the quantity of loans the Fed is making is the wrong measure of success,” said Tiffany Wilding, an economist at Pacific Investment Management Co. If the Fed’s credit programs go to “full capacity, then it means conditions have worsened.”

The market for corporate debt is the best example. Private investors have bought record volumes of corporate issuance this year, including for firms too risky to qualify for Fed support. “The market rallied before they spent one dollar,” said JPMorgan Chase credit strategist Eric Beinstein. “That’s a home run.”

The Fed has two programs for corporate bonds—one for large companies to issue new debt and one that buys their existing debt. The first one hasn’t seen any use, and analysts aren’t sure it ever will because of improved market conditions and a potential stigma associated with using it.

Fed officials changed the second one last month by saying they would buy individual bonds from eligible firms whether or not companies asked the Fed to do so. Previously, the Fed had said it would buy debt from firms that completed a complicated registration process to comply with requirements imposed by Congress.

“As weeks went by, it was clear this certification requirement was going to be a roadblock,” Mr. Beinstein said. The Fed’s revamp sidestepped that process and made it possible for officials to “follow through on what they initially said they would do.”

Meanwhile, a separate loan program for state and local governments has had only one borrower so far. The state of Illinois sold $1.2 billion of debt last month at a rate more than 1 percentage point below the rate at which it was previously able to access markets in May.

Municipal bond strategists say they have been disappointed by the degree to which the Fed positioned the program as a backstop. “The pricing is very high,” said Tom Kozlik at Hilltop Securities. “It’s not set up to be anything close to what we now have in the corporate market.” 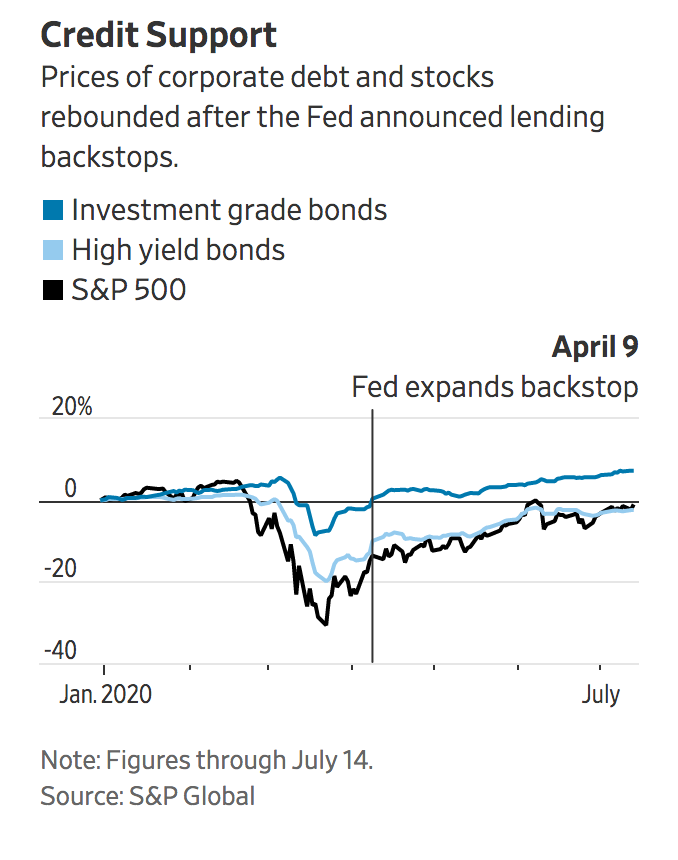 Dallas Fed President Robert Kaplan said the program shouldn’t be judged on lending volumes. It “has achieved a lot of what we intended, which was to help ensure that the muni market functions,” he said. The persistence of the virus suggests Fed officials are likely to extend several programs that are currently set to run until Sept. 30.

Because short-term interest rates are pinned near zero and long-term rates are at all-time lows, the Fed has less room to stimulate the economy with its tried-and-tested methods. If the current downturn is deeper and longer, the credit programs offer a potentially powerful new tool.

It is one that would require officials to creep ever farther from their comfort zone.