Ben Mohr, senior research analyst of fixed income at investment consultant Marquette Associates, calculated that total U.S. consumer debt hit $14 trillion in the first quarter of 2019, surpassing the roughly $13 trillion of leverage accumulated in credit cards, auto loans and mortgages and other debt back in 2008, when those souring loans and securities pegged to them helped to send global markets into a tailspin (see chart below):

Mohr told MarketWatch that the increase in student loans — often cited as a source of consternation for economists and strategists — saw a notable increase. At the end of the first three months of 2019, student loan debt hit $1.486 trillion, according to credit data from the New York Federal Reserve. By comparison, student loan at the height of the financial crisis was $611 billion and has been mostly rising since, Mohr said. “It has ballooned and that’s a dramatic increase,” the fixed-income analyst said of the student-debt expansion.

Analyzing growing consumer leverage another way, Mohr said the ratio of debt compared against the U.S. population estimated at 327 million, according to U.S. Census Bureau data, translates to a record per-person debt ratio at $41.77, surpassing the ratio of $41.68 back in 2008.

Concerns about ballooning debt come as U.S. equity markets have been drifting toward records, with the Dow Jones Industrial Average DJIA, and the S&P 500 index within about 1.5% of all-time highs, while the benchmark 10-year Treasury note is hovering not far from its lowest levels in months at 2.09%.

Those market moves come against a backdrop of a Federal Reserve that is considering reducing borrowing costs for individuals and corporations from an already relatively benign range of 2.25%-2.50%.

So, should we be worried about rising consumer debt?

Mohr says there are some mitigating factors. Gross domestic product, the official scorecard of the U.S. economy, demonstrates an economy in far better shape than it was during the financial crisis. GDP, which includes all goods and services produced, expanded 3.1% in the first quarter of 2019, compared against 2008 when the overall economy contracted at an annual rate of 6.3%, according to the Bureau of Economic Analysis.

The Marquette analyst also noted that defaults on debt are tame, suggesting that investors aren’t being overwhelmed by the growing obligations. A pickup in loan delinquencies was a telltale sign that the economy was beginning to crack under the weight of debt, but Mohr said consumer delinquencies today are trending near historic lows.

Historically low interest rates have helped consumers to manage debt and the Fed may further help that cause soon by complying with market wishes for yet-lower borrowing costs.

That said, if the economy does begin to contract into recession as some economists fear, the debt load could be a more pressing matter. “We are starting to see some chinks in the armor,” Mohr said.

1 In 5 People Making More Than $100,000 A Year Are Still Living Paycheck To Paycheck

And that doesn’t bode well for their retirement savings.

Making bank doesn’t mean you have money in the bank.

Fully 18% of people who earn more than $100,000 say they live paycheck to paycheck, according to a survey of 8,000 workers by global advisory firm Willis Towers Watson.

“There’s a high correlation between high pay — and living in a high-cost area and having an advanced degree,” Shane Bartling, the senior director for retirement for the firm, explains of why so many people making a chunk of change say they’re still living paycheck to paycheck.

Indeed, an analysis by personal finance site MagnifyMoney found that in some pricey cities it’s particularly hard to make it on $100,000. “The worst metro area for a family earning $100,000 includes Washington, D.C. and neighboring cities Arlington and Alexandria, Va.

After factoring in monthly expenses, families would be $315 in the red,” MagnifyMoney reported. “Stamford, Conn., San Jose, Calif., San Francisco, and the New York City area round out the five worst areas for affordability.”

Others may be facing a pile of student loan debt that makes it difficult for them to get out of the paycheck-to-paycheck lifestyle. Currently, Americans have a total of roughly $1.5 trillion in student loan debt — and graduate degrees are responsible for a chunk of that debt.

Wherever they live and no matter their debt levels, one thing is clear: Most Americans don’t feel prepared for retirement. Fully 58% of workers with pay of more than $100,000 indicated they are not saving enough for retirement; that goes up to 69% across income levels.

Frankly, they probably aren’t saving enough: The Employee Benefit Research Institute projects that more than four in 10 U.S. households where the head of the household is between 35 and 64 will likely run short of money in retirement.

Experts say there are ways to up your retirement savings, even if you’re feeling financially stretched. First, look for ways to slash your current spending to free up extra cash or consider a side gig to earn more.

You also shouldn’t beat yourself up if you can’t immediately max out your retirement contributions. Try to get at least up to what your employer matches and then gradually increase contributions as you can.

She adds: “And don’t forget IRAs; the maximum contribution for 2020 is $6,000, with an extra $1,000 catch-up provision in you’re 50 or older. The tax-free compounding of these retirement accounts is strong magic for your income at retirement time.” 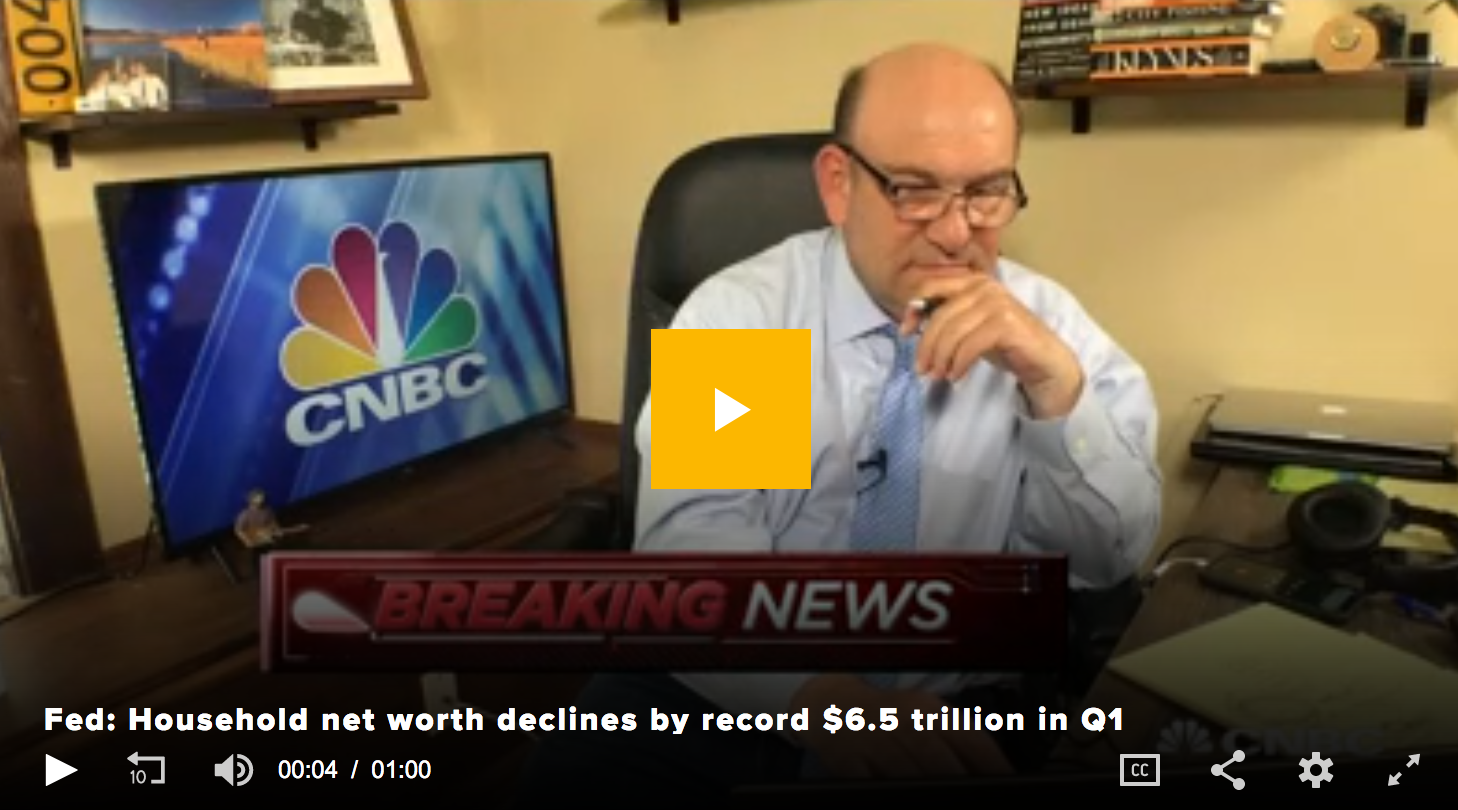 * Debt Surged And Household Net Worth Tumbled In The First Three Months Of The Year As The Initial Impact Of The Coronavirus Pandemic Hit, According To The Fed.
* Total Domestic Nonfinancial Debt Jumped By 11.7% To $55.9 Trillion, The Report Said.
* Debt Had Increased By 3.2% In The Previous Quarter.

Debt surged and household net worth tumbled in the first three months of the year as the initial impact of the coronavirus pandemic hit, according to Federal Reserve data released Thursday.

Total domestic nonfinancial debt jumped by 11.7% to $55.9 trillion, the Fed said in its quarterly statement on domestic financial accounts. Debt had increased by 3.2% in Q4 of 2019.

At the same time, plunging stock market values took a bite out of net worth, which fell $7.4 trillion to $110.8 trillion. Wall Street, however, staged a sharp recovery off its March lows, so much of that loss likely has been made up. Equity values fell by $7.8 trillion, while real estate value increased by $400 billion in the first quarter.

The increases in debt and decrease in household worth came as the longest expansion in U.S. history came to an end.

Earlier this week, the National Bureau of Economic Research declared that a recession started in February, following an 11-year expansion. The bull market in stocks ended the same month but turned around on March 23 due to excessive Federal Reserve liquidity injections.