The $2.1 Billion Case For Building A Federal EV Fleet

The U.S. government’s garage is full of tired, old gas guzzlers costing $1 per mile, mostly in fuel and maintenance. The $2.1 Billion Case For Building A Federal EV Fleet

If President Joe Biden’s administration is going to replace the entire federal vehicle fleet with fully electric vehicles, as promised, it will need trucks and vans — lots of them. 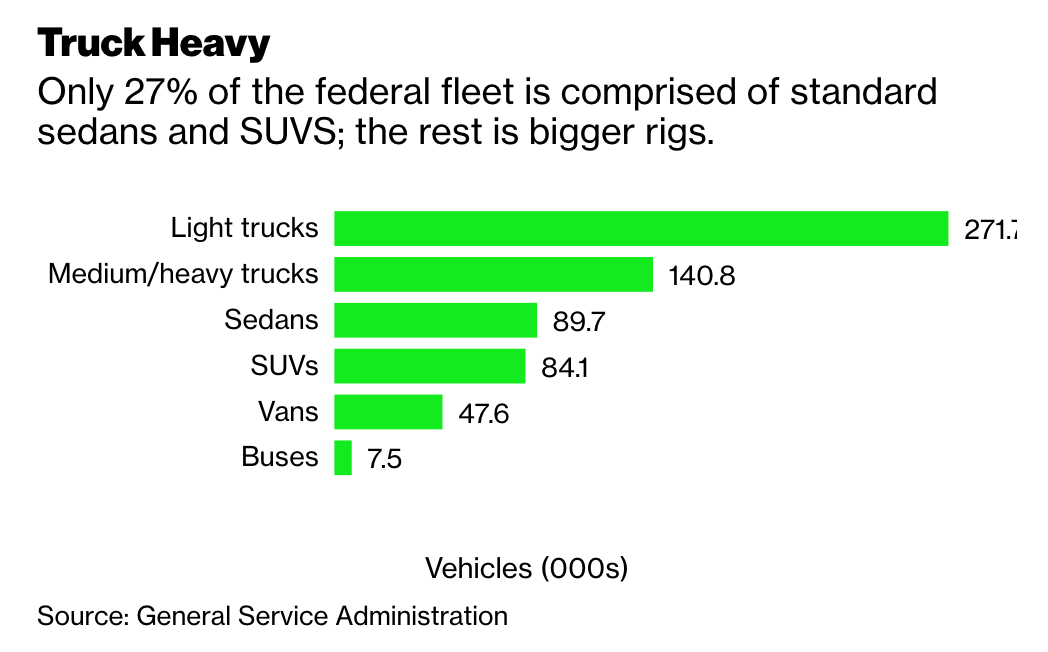 An analysis of Uncle Sam’s garage found an aging, expensive crush of big rigs — some 645,000 vehicles in all, almost two-thirds of which are trucks. Another 9% of the fleet is vans and buses. If U.S. automakers want to cash in on a federal fleet overhaul, they would be wise to accelerate efforts to electrify their largest models; none of these large models has been electrified — at least not at scale.

The U.S. Postal Service accounts for slightly more than one in three federal vehicles and almost all of its rigs are trucks. The government solicited bids for a new mail-hauling machine six years ago and has yet to name a winner. If the Biden administration wants to make quick progress on its blanket electric vehicle policy goal, a plug-in postal truck seems like a must.

Not only are the government’s rigs big and thirsty, they are tired. The average fed-mobile is almost 15 years old, three years more senior than the typical car or truck on U.S. roads (the mail trucks are particularly creaky; nearly 22 years old, on average).

What’s more, taxpayers are paying about $1 per mile for these machines. Of the $4.4 billion the government spends on vehicles each year, nearly half of that goes to fuel and maintenance.

For Biden’s policy team, the line items add up to a compelling case for a mass EV swap. Although the initial outlays would be steep, a fleet of electric mail trucks, police cruisers and border patrol pickups — to name a few use-cases — would be cheaper to top off and wouldn’t require oil changes, spark plugs, oxygen sensors or many of the costly items required to keep running an engine driven by small explosions. 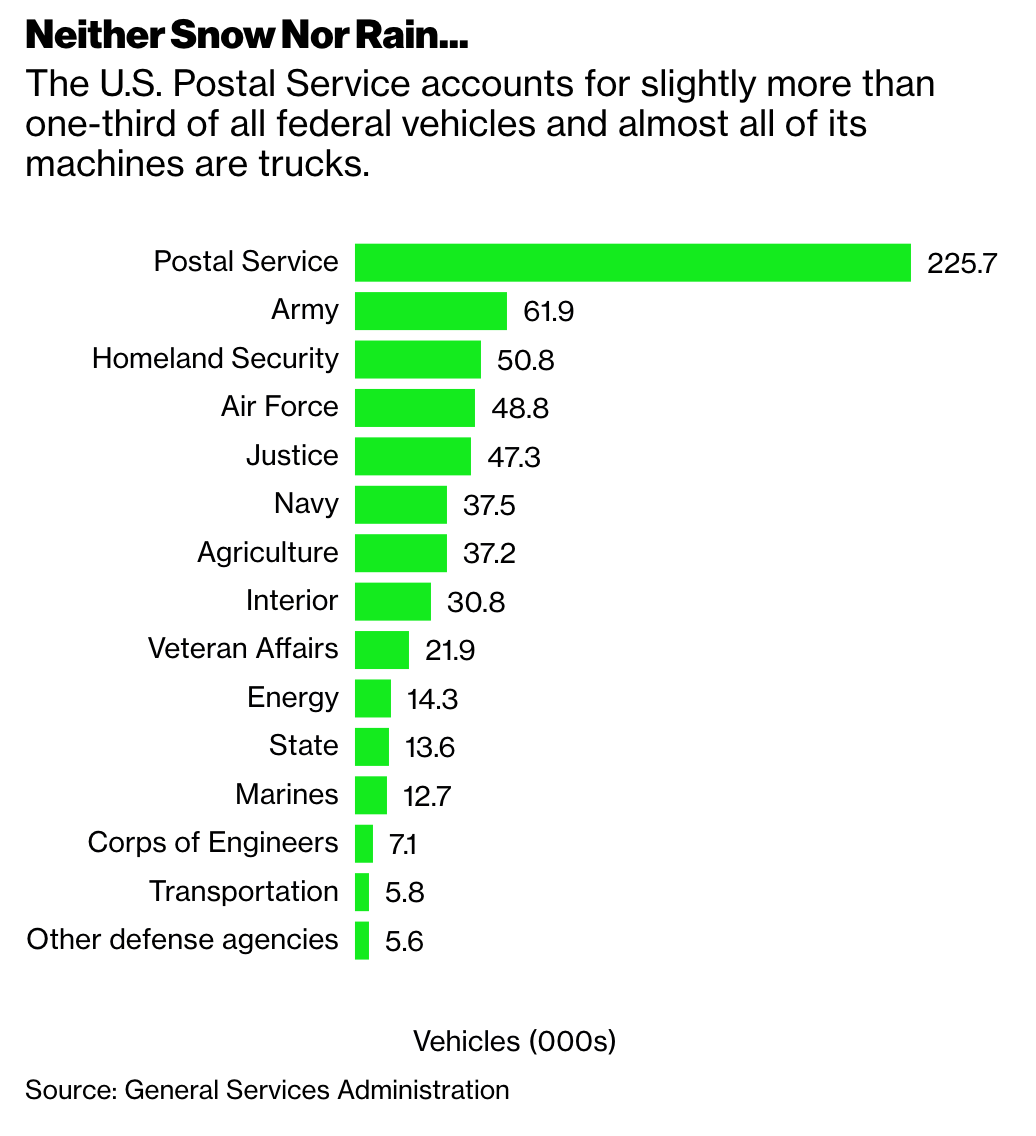 With high tallies for both fuel and maintenance, the U.S. vehicle fleet costs almost $1 a mile to stay on the road.

Ironically, government vehicles aren’t used incessantly. While the average U.S. driver logs almost 14,000 miles a year, most federal agencies average well less than 10,000 miles per vehicle. The Postal Service, for example, covers 1.3 billion miles a year — twice as much as any other agency.

Though, that breaks down to less than 6,000 miles per rig. What’s more, the miles are on predictable schedules and involve a minimum of 600 stops, a work pattern that drastically improves the economic case for an electric fleet.

Even if the Biden administration is able to successfully make its case to go electric, shopping won’t be simple. Biden has repeatedly buttressed his EV argument by saying it will create jobs; indeed, it would almost have to.

The majority of the vehicles Uncle Sam needs simply aren’t electric yet. And those that are battery powered, would have trouble clearing the president’s thresholds for union participation and domestic production.

Ford Motor’s electric van, for example, isn’t slated to come off the assembly line until later this year. An electron-driven version of its F-150 pickup isn’t expected until 2022. Hitching on to a heavy federal contract would help a company like Ford bridge the economic gap between now — when large electric vehicles are still tough to make a profit on — and the near future, when costs are expected to level with gasoline machines.

For now, the government has just 3,215 electric vehicles, mostly owned by the Navy. As slow as the private sector in the U.S. has been to adopt EVs, federal car shoppers have been slower. Biden is stomping on the accelerator, though time will tell how the machine responds.

US Productivity Falls 4.8% In The 4Th Quarter To Mark Biggest Drop Since 1981

After Capitols Become Fortresses, Far-Right Protesters Are Mostly A No-Show

Internet Detectives Make Up To $1000 Identifying Pro-Trump Rioters. Some Have Already Been Fired

Cash-Strapped Americans Are Drawing Down Savings As Pandemic Divisions Widen

China Tells Inefficient Firms To Toughen Up Or Prepare To Fail