Barriers stand between buyout firms’ cash pile and the businesses in need that they own. Private Equity’s Trillion-Dollar Piggy Bank Holds Little For Struggling Companies (#GotBitcoin?) 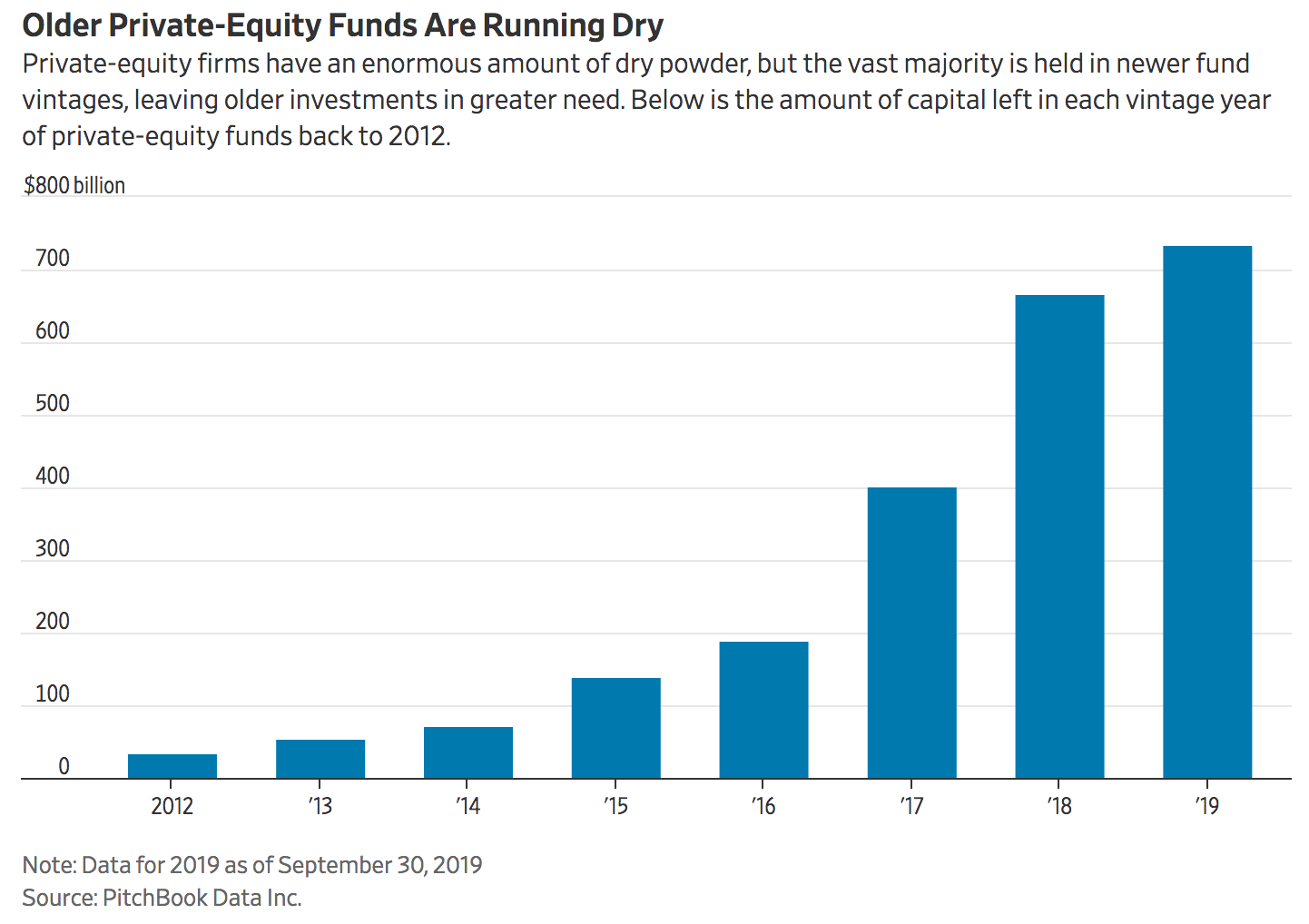 The mountain of cash held by private-equity firms is turning out to be a mirage for companies they own that are struggling due to the coronavirus pandemic.

The buyout industry has spent years building up its dry powder, or money that investors have committed to private-equity funds that hasn’t yet been spent. That pile was at a record $1.45 trillion globally as of June, excluding venture-capital funds, according to data provider Preqin Ltd.

Yet all this dry powder has done little to soften the pandemic’s blow to companies owned by buyout firms. From retailers to restaurants and rental companies, businesses owned by private equity have toppled into bankruptcy since coronavirus lockdowns began in the U.S. in March.

The private-equity owners of some bankrupt companies had no shortage of cash to spend. Ares Management Corp., which bought Neiman Marcus in 2013 alongside the Canada Pension Plan Investment Board, was sitting on more than $33 billion of dry powder shortly before the luxury retailer filed for bankruptcy last month. Ares declined to comment, and the CPPIB didn’t respond to a request for comment.

Older Private-Equity Funds Are Running DryPrivate-equity firms have an enormous amount of dry powder, but the vast majority is held in newer fundvintages, leaving older investments in greater need. Below is the amount of capital left in each vintage yearof private-equity funds back to 2012.

In the retail sector, where more than 70% of the companies with the lowest-rated debt are owned by private equity, the fates of many struggling businesses will be determined by firms’ decisions of whether to inject more capital, according to Moody’s Investors Service.

These injections may not be forthcoming. Many in the industry say structural constraints prevent the trillion-dollar hoard from flowing to needy companies. Critics say firms are choosing to cut unpromising investments loose.

Private-equity firms hold ample money earmarked for new investments, but little for shoring up companies they bought more than three or four years ago. Of all the dry powder in the buyout industry, about 85% is earmarked for funds raised from 2017 to 2019, according to analysis by the investment and consulting firm Cambridge Associates.

Older funds “sailed right into the Covid crisis without additional capital available to support their companies as easily as the more recent vintage years,” she said.

Investor sentiment creates another barrier to using dry powder to keep struggling businesses afloat. Investors in private-equity funds, referred to as limited partners, are rarely enthusiastic about new money being spent to rehabilitate struggling businesses, preferring that managers buy new ones that can be had at cut rates amid a slowing global economy.

Even if firms wanted to use newly raised money to prevent an older investment from falling into bankruptcy, they might be limited by fiduciary obligations to investors that committed that money to them, said Brett Palmer, president of the Small Business Investor Alliance.

“Fund managers have an obligation to their limited partners to ensure that the next dollar invested is a data-driven, market-driven decision, and not an emotional decision,” he said. “They may love a business and a management team, but it has to make financial sense.”

Critics, however, say private-equity firms could be doing much more.

Transactions in which a firm invests in a company it already owns, but from a newer fund—so-called cross-fund investments—were on the rise before the coronavirus struck, and allow private equity to use newly raised money to support older investments. But industry observers have seen little use of this strategy to support struggling companies during the pandemic.

Eileen Appelbaum, a co-director of the Center for Economic and Policy Research who has testified before Congress on private-equity practices, believes the industry is making a self-interested calculation to support only the most promising companies, regardless of the cost to workers and investors in companies that are struggling.

Private-equity firms “have options, even if they say they can only spend new money on new investments. I think they have a fiduciary responsibility to investors in the older funds as well,” she said.

Investors in private-equity funds, however, in general aren’t enthusiastic about the use of cross-fund investment to support older investments, said Jennifer Choi, managing director of industry affairs for the Institutional Limited Partners Association, a trade group for investors in private equity.

Many limited partners are apprehensive of the potential conflicts of interest in such deals, in which a firm essentially sells a company to itself.

In a recent poll of limited partners conducted by ILPA, just 10% chose cross-fund investments as the preferred way to preserve value in older companies, among a slate of options Ms. Choi said.

More popular among limited partners, she said, was a practice called recycling, in which the earnings from a successful investment are used to support other companies in the same fund, instead of being immediately returned to investors.

Like cross-fund investments, recycling requires approval from investors, and can sometimes ruffle the feathers of limited partners with their own liquidity issues.

Limited partners say requests for recycling have sharply increased since the pandemic. Providence Equity Partners and Palladium Equity Partners are two firms that recently have sought investor approval for changes to recycling provisions.

In this contradictory situation, where buyout firms are flush with cash but largely unable or unwilling to use it to support struggling older investments, companies may have to rely on deft management to stay afloat, said Ms. Auerbach. She said she “does not underestimate the ingenuity” of private-equity firms or the companies they own.

“It’s during periods like this where you really find out what everybody is made of,” she said. “You would be surprised at how companies can survive on fumes in a moment like this.”