Nationwide protests have cast a spotlight on racism and inequality in the United States. Cost Of Racism: U.S. Economy Lost $16 Trillion Because Of Discrimination, Bank Says

Now a major bank has put a price tag on how much the economy has lost as a result of discrimination against African Americans: $16 trillion.

Since 2000, U.S. gross domestic product lost that much as a result of discriminatory practices in a range of areas, including in education and access to business loans, according to a new study by Citigroup. It’s not an insignificant number: By comparison, U.S. GDP totaled $19.5 trillion last year.

And not acting to reverse discriminatory practices will continue to exact a cost. Citigroup estimates the economy would see a $5 trillion boost over the next five years if the U.S. were to tackle key areas of discrimination against African Americans.

“We believe we have a responsibility to address current events and to frame them with an economic lens in order to highlight the real costs of longstanding discrimination against minority groups, especially against Black people and particularly in the U.S.,” wrote Raymond J. McGuire, a vice chairman at the bank and the chairman of its banking, capital markets and advisory team.

Wall Street itself has also faced accusations for years of discriminatory practices against African Americans, such as limiting approval for mortgages or not providing enough banking options in minority neighborhoods, which are among the damaging actions identified by Citigroup researchers.

Specifically, the study came up with $16 trillion in lost GDP by noting four key racial gaps between African Americans and whites:

* $13 trillion lost in potential business revenue because of discriminatory lending to African American entrepreneurs, with an estimated 6.1 million jobs not generated as a result.

* $2.7 trillion in income lost because of disparities in wages suffered by African Americans.

* $218 billion lost over the past two decades because of discrimination in providing housing credit.

* And $90 billion to $113 billion in lifetime income lost from discrimination in accessing higher education. 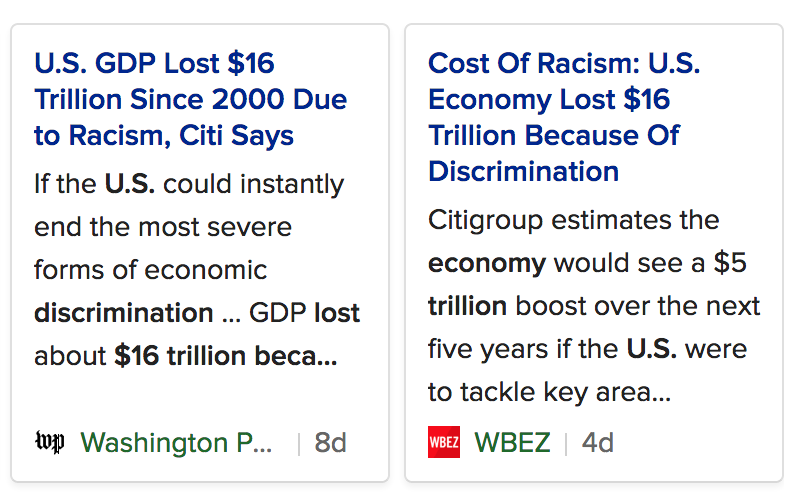 As a result, Citigroup urges a slew of actions to reverse discriminatory practices and boost GDP over the next five years, including addressing the wage gap suffered by African Americans and promoting diversity at the top within banks and companies.

Citigroup’s recommendations aren’t new: Various studies have shown similar findings, and experts have called for similar action for years, though so far progress has been slow.

“Racial inequality has always had an outsized cost, one that was thought to be paid only by underrepresented groups,” said Raymond J. McGuire, Vice Chairman of Citigroup and Chairman of Banking, Capital Markets and Advisory at Citi. “What this report underscores is that this tariff is levied on us all, and particularly in the U.S., that cost has a real and tangible impact on our country’s economic output. Now, more than ever, we have a responsibility and an opportunity to confront this longstanding societal ill that has plagued Black and brown people in this country for centuries, tally up the economic loss and as a society, commit to bring greater equity and prosperity to all.”

The report identifies the underlying causes of the racial and economic gaps exacerbated by the COVID-19 pandemic and discusses the value of closing gaps. Report authors prognosticate that if racial inequity gaps were closed today, the equivalent add to the U.S. economy over the next five years could be $5 trillion of additional GDP, or an average add of 0.35 percentage points to U.S. GDP growth per year and 0.09 percentage points to global GDP growth per year.

“One important thing that we can do is to show the costs of racial inequality through objective analysis which is what the authors of this report have sought to demonstrate,” said Dr. Catherine L. Mann, Global Chief Economist at Citi and one of the principal authors of the report. “Our overarching goal for the Citi GPS series is not only to tackle the key opportunities and challenges of the 21st century, but also to address complex societal questions and not to shy away from difficult subjects. As such, we believe that we have a responsibility to address current events and to frame them with an economic lens in order to highlight the real costs of longstanding discrimination against minority groups, especially against Black people and particularly in the U.S.”