The network, which uses quantum principles to more securely transmit data, could be functional in about a decade. In Push For Better Cybersecurity, U.S. Energy Department Outlines A National Quantum Internet 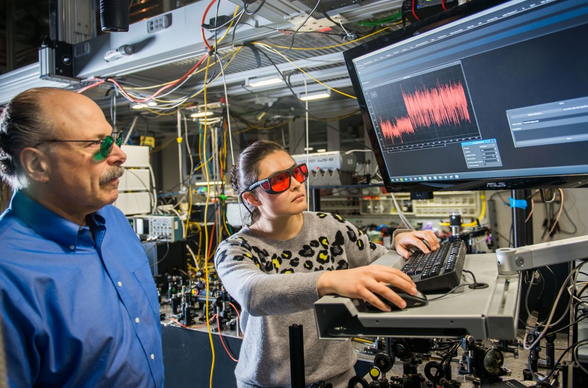 David Awschalom, Left, A Physicist At The University Of Chicago And The Energy Department’s Argonne National Laboratory, Reviews Data From A Quantum Information Experiment With A Graduate Student In His Lab.

A group led by the U.S. Department of Energy and the University of Chicago plans to develop a nationwide quantum internet that could be functional in about a decade and with the potential to securely transmit sensitive information related to national security and financial services.

“What we’re moving forward on is building out quantum networks [to] someday…turn into a full second internet, a parallel internet to the digital internet,” said Paul Dabbar, the Energy Department’s Under Secretary for Science.

The project will be funded by a portion of the $1.275 billion budget allocated as part of President Trump’s National Quantum Initiative, an effort to accelerate research and development in quantum information science, an area of study that includes quantum-based communication and quantum computing.

The group developing the U.S.-based quantum internet, which includes about 50 organizations, expects to announce its plan at an online and in-person event Thursday at the University of Chicago.

The users of a quantum internet could include organizations that handle significant amounts of highly sensitive data and are traditionally vulnerable to cyberattacks, such as the financial services industry and government agencies in charge of national security.

“Literally anything that would be transmitted encrypted today would be suitable for the quantum internet in the future,” Mr. Pistoia said in an email. JPMorgan isn’t directly involved with the Energy Department’s plan, but Mr. Pistoia said he hopes to collaborate with the researchers in the future. The company has been experimenting with quantum technologies.

Today’s internet can transmit information, such as an email, by encoding the data in many photons, or particles of light, that run along fiber-optic cables underground, and over wireless communication technologies and satellites.

In the quantum internet, the photons that store the information would be “entangled,” a quantum mechanical effect Albert Einstein referred to as “spooky action at a distance,” and transferred across cities using a combination of fiber-optic cables, wireless communication technologies and satellites.

Entangled photons are linked with one another despite being separated by vast distances. If a hacker tried to intercept the information encoded in the entangled photons at any time during its transmission, the properties of the particles of light would be disturbed, and the entanglement would be broken. An email, for example, would appear scrambled to the hacker and also arrive scrambled to the person receiving it.

“A quantum network, because of physics, is by definition completely secure,” Mr. Dabbar said.

Creating entangled photons and keeping them entangled while the information is being conveyed across the country is one technical challenge physicists will be up against in creating the quantum internet.

One method is to use special crystals called nonlinear optical crystals that, when excited by a pulse of light, can create a pair of entangled photons, said David Awschalom, a physicist at the University of Chicago and Argonne National Laboratory and a lead author of the quantum internet plan.

Scientists are currently experimenting with so-called quantum repeaters that can be placed along the nodes of this new internet to make sure the photons remain entangled when the signal drops, which is inevitable during the transmission of data over the internet across the country.

Repeaters are commonly used devices in today’s internet because the signal strength starts to drop after about 20 miles during transmission. Quantum repeaters are in their early stages of development but are showing promising results, Mr. Awschalom said.

Scientists from the Energy Department’s Argonne National Laboratory, a science and engineering research center in Lemont, Ill., and the University of Chicago in February said they had established a quantum network of 52 miles worth of entangled photons running on unused telecom fiber in the Chicago suburbs.

In about a year, the network is expected to be connected to the Energy Department’s Fermi National Accelerator Laboratory, a particle physics and accelerator lab in Batavia, Ill., creating an 80-mile quantum internet test bed.

The government’s involvement in the development of the quantum internet mirrors the history of the internet, whose precursor was the ARPANET that the U.S. Defense Department developed in 1969. Commercial use of the internet became widespread about 20 years later.