One of United States President Donald Trump’s re-election campaign websites was briefly defaced yesterday, according to an Oct. 28 article on TechCrunch. 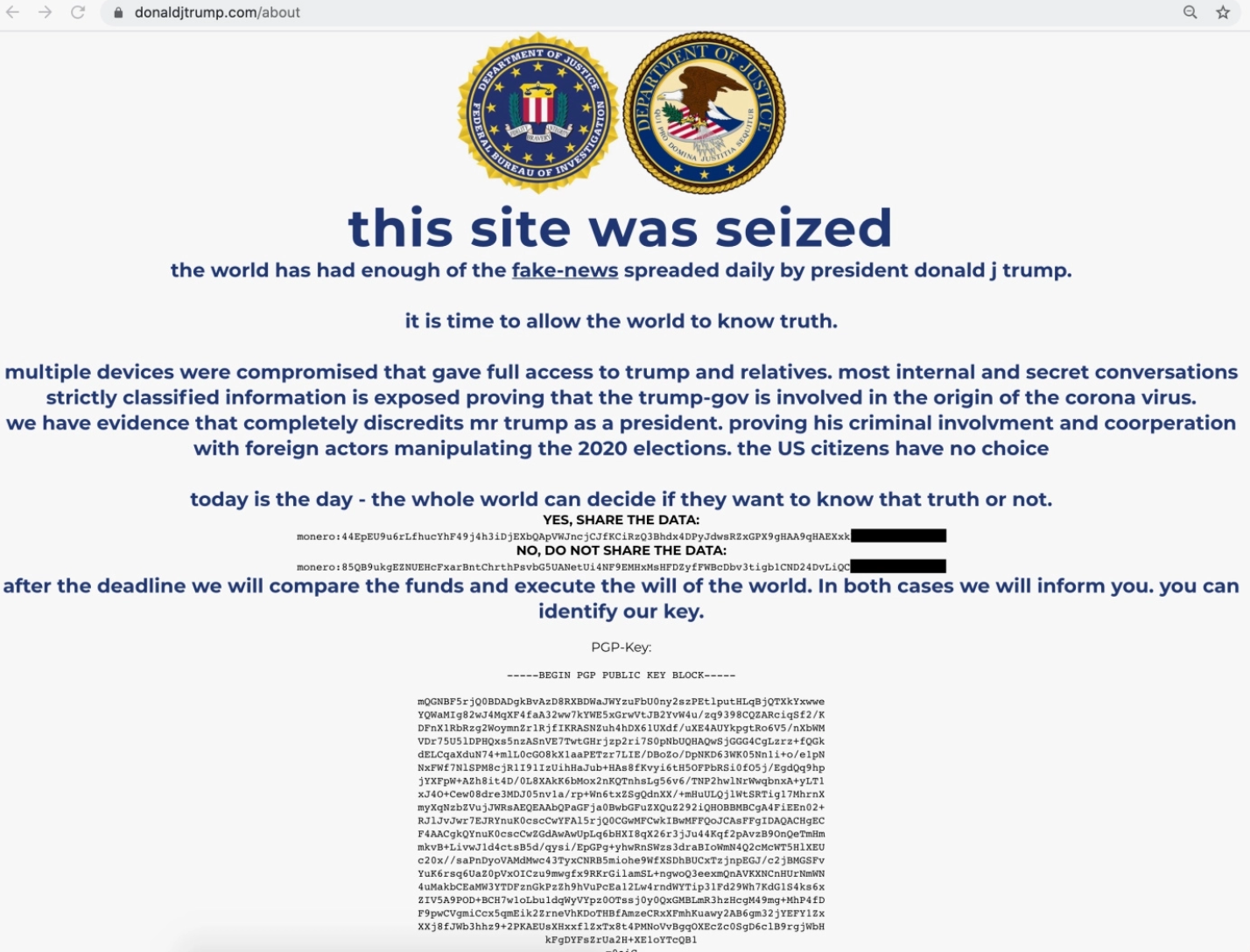 Hackers managed to replace donaldjtrump.com’s usual campaign rhetoric and request for donations with a spoof of the FBI’s “This site has been seized” message.

The unknown attackers claimed to have obtained “strictly classified information” and encouraged people to essentially vote on whether they wanted the data released, using payments to two Monero wallets.

Among the insider information reportedly on offer was evidence discrediting Trump as president and connecting his government to “the origin of the coronavirus.” There is no evidence to suggest that the individuals involved possess any such information.

The website contained no sensitive data, according to Trump’s campaign communications director, Tim Murtaugh, who confirmed the attack in a tweet.

Earlier this evening, the Trump campaign website was defaced and we are working with law enforcement authorities to investigate the source of the attack. There was no exposure to sensitive data because none of it is actually stored on the site. The website has been restored.
— Tim Murtaugh (@TimMurtaugh) October 28, 2020

Trump recently claimed that “nobody gets hacked,” just days before having his Twitter account hacked by a Dutch researcher who claimed he guessed the password as “maga2020” on his fifth attempt.

The cryptocurrency world is eagerly watching the U.S. presidential election race and wondering how the results could potentially affect the price of Bitcoin and other tokens.

President Trump’s campaign website appeared to have been hacked Tuesday night, briefly displaying an anti-Trump message and a solicitation for cryptocurrency payments.

The message was posted for less than half an hour before the campaign’s website was restored, but the apparent hack comes as federal officials are warning of the potential for attempts to disrupt the November 3 election by hackers aligned with America’s international rivals.

Whoever posted the message, which used FBI and Department of Justice logos to parody a notice put on websites seized by the U.S. government, claimed to have compromised devices belonging to Mr. Trump and his relatives.

The message said the person had obtained evidence that “completely discredits” Mr. Trump, and asked for money to be deposited in either of two Monero cryptocurrency accounts — one under the header “Yes, share the data,” and the other “No, do not share the data.”

Monero transactions are difficult to track, making it a favorite cryptocurrency among those seeking to protect their anonymity, including scammers seeking to convince people to send them unrecoverable money. It’s also previously been associated with ransomware attacks and Dark Web illicit markets.

Trump campaign spokesperson Tim Murtaugh said in a statement that no data has been stolen.

“Earlier this evening, the Trump campaign website was defaced and we are working with law enforcement authorities to investigate the source of the attack. There was no exposure to sensitive data because none of it is actually stored on the site. The website has been restored,” Murtaugh said.

The day before, CBS News reported that dozens of voters in a heavily Democratic county in Florida and across several states received emails that purportedly came from a right-wing group that threatened to “come after” them unless they voted for President Trump. Officials in the states targeted in the scheme later said there was no evidence that any voter databases were breached.

.@realDonaldTrump‘s campaign website has been hacked. Doing research for a climate change article and this is what pops up: pic.twitter.com/Kjc2ELSdAV

On Tuesday night, President Trump spoke to supporters in Wisconsin, relaying some of the final and most important messages of his campaign to the crucial swing-state voters. “You like the song ‘O Canada,’ right?” he asked. “Yeah. Hockey game.

Voters who went to his campaign website found a different message. Under doctored banners of the Federal Bureau of Investigation and the Department of Justice, a lowercase screed read that Trump’s “site was seized” due to “classified information … proving that the trump-gov is involved in the origin of the coronavirus.”

The missive also claimed that evidence would soon be revealed that proved Trump’s “criminal involvment” with foreign actors interfering in the 2020 election. All that was needed for the exposure of the massive scandal — or to keep it under wraps — would be sending cash to a Monero link, a cryptocurrency known to be difficult to trace.

Trump campaign spokesman Tim Murtaugh said that the “website was defaced and we are working with law-enforcement authorities to investigate the source of the attack,” which lasted for around 30 minutes. According to the New York Times, “cybersecurity experts said that the incident could have been caused by tricking a website administrator into turning over their credentials, in what is known as a phishing attack, or by redirecting the campaign website to the hacker’s own server.”

The hack came a little over three months since dozens of major Twitter accounts — including those of Joe Biden and Barack Obama — were compromised in a Bitcoin scam that law-enforcement officials allege was orchestrated by a teenager in Florida.

Though both actions were shut down quickly and appeared to cause little damage, the two major hacks this election year reveal the prevalence of the threat. And while the Biden campaign has expressed concern over the potential of online interference in next week’s election, Trump has been less occupied with the problem.

Last week, days before the director of national intelligence warned of online disinformation coming from Iran and Russia, the president told his followers in Arizona that “nobody gets hacked. To get hacked you need somebody with 197 I.Q. and he needs about 15 percent of your password.” He apparently forgot, or wasn’t aware, that Trump Hotels had been breached in 2014, 2015, 2016, and 2017.