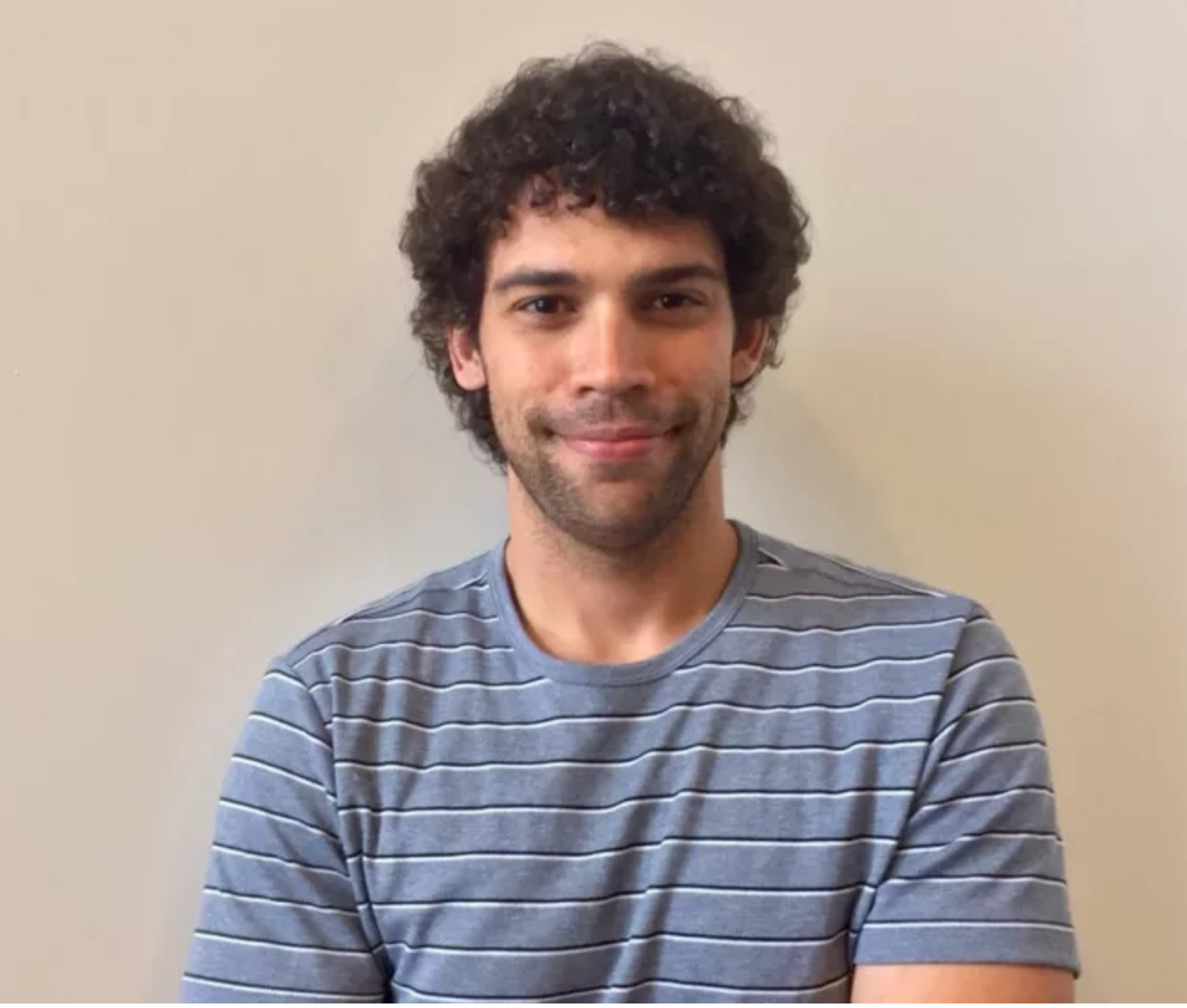 Today, as the Handshake Network records its 1 millionth transaction, HandyBrowser will go live. It’s a dedicated way to access the uncensorable internet ecosystem made possible through the distributed Handshake Network, as well as anything else you would normally search for.

“This is a pivotal moment for Handshake, much like the advent of Web3 tech in general,” Steven McKie, HandyBrowser’s technical manager and CEO of Amentum, said in a phone call. After building the peer-to-peer Handshake network as a labor of love with two partners, lead developer Alex Smith and quality-assurance specialist Thomas Costanzo, McKie hopes to entice peers, developers and investors.

“We just want folks to geek out on it,” McKie said, adding this private and uncensorable web browser is an “if you build it, they will come”-type bet on the future.

Under development for over two years, Handshake minimizes the role of centralized authorities in the internet’s basic infrastructure. The much-anticipated protocol garnered significant buzz at launch in February, though remained more of a hobbyist pursuit. HandyBrowser is aimed at all-comers, who don’t necessarily want to know what’s driving the car, only that the car gets from A to B safely.

Built using NW.js and Chromium, the browser runs a full Handshake node and light client to enable access to Handshake-compatible sites and the traditional web. In doing so, it strengthens the Handshake protocol and disintermediates the centralized players in web browsing.

“Without all the bloat of the modern web, the internet is even better,” McKie said. “Every site you know and love will load more quickly.”

Revolutionizing web browsing is one of blockchain’s most championed use cases, and has attracted competing players with varying levels of success. Namecoin, an early fork of Bitcoin, tried to turn web search into a type of transaction. It saw little traction. Meanwhile, the Brave browser, which rewards users for their attention, now has 13.5 million monthly users. Even IBM filed a patent to get in on the game.

When asked if HandyBrowser is looking to outcompete Chrome, Opera or Brave, McKie said it’s more like “co-opertition,” a portmanteau of cooperation and competition. The browser can serve simply as a redundant mirror to the internet, but also can be forked and modified to suit the dominant players. 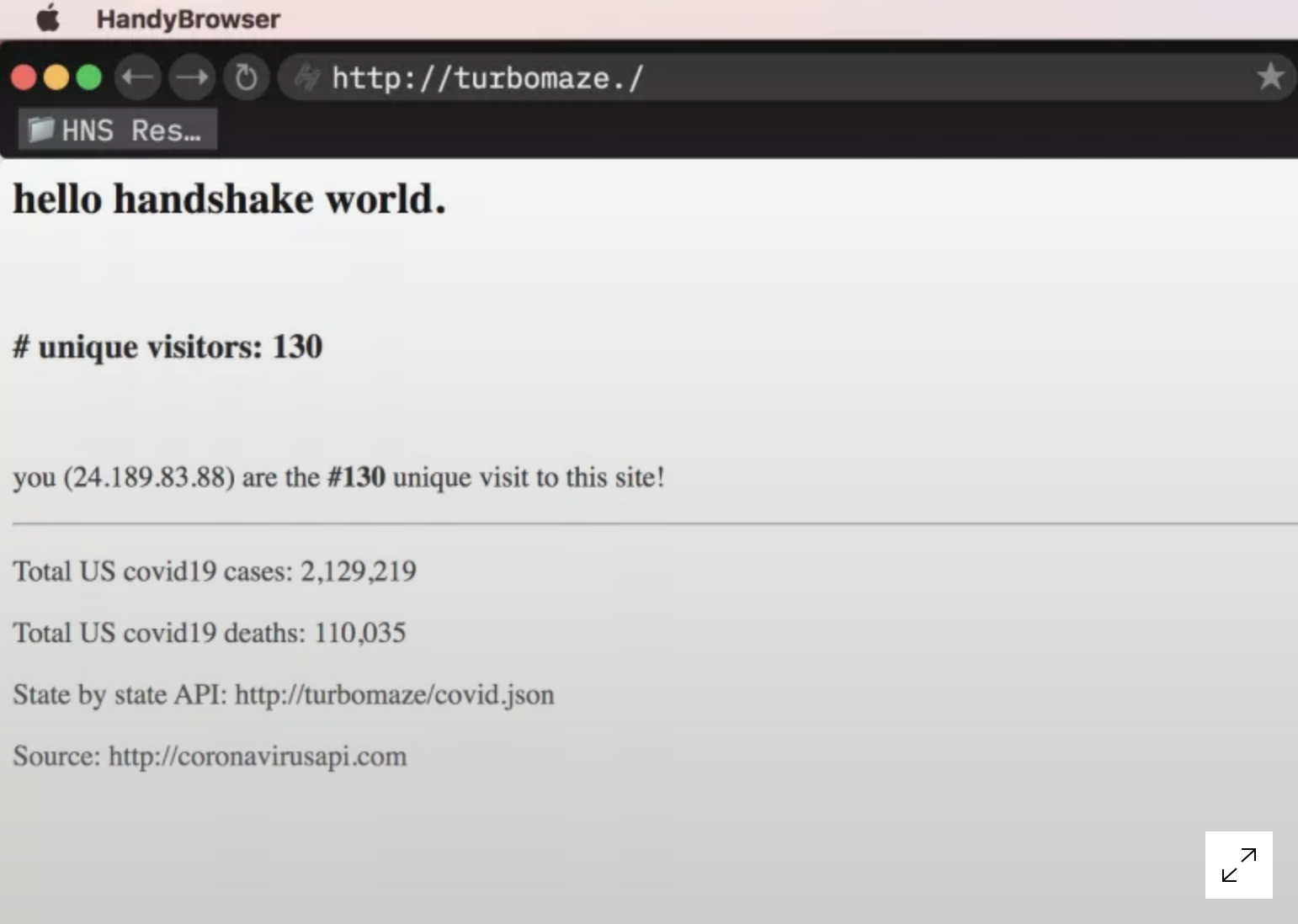 “Revolutionizing web browsing is one of blockchain’s most championed use cases.”

“I use Chrome and Brave. If Handshake makes parts of those better? Awesome. That just means the web is better. We’ve done our part. If Handshake becomes a default browser that the open-source community embraces, cool. Or if it doesn’t happen and it becomes a reference as a proof-of-concept, that’s also fine,” McKie said.

In this sense, McKie has not added monetizing features to this Web3 product, but said it’s open for other developers to integrate as they wish. This follows Handshake’s long-standing dedication to decentralization, open source and fair-play initiatives.

After raising $10.2 million from Silicon Valley notables including the Founders Fund, Polychain Capital and Draper Associates, the project airdropped a stash of pre-mined coins to open-source developers working on the project.

What’s In A Name?

The Handshake protocol is a decentralized system to reroute web traffic and provide true ownership over websites and domain names. It works by creating an alternative to the internet’s naming convention, the Domain Name System (DNS).

Often called the internet’s phonebook, the DNS is really more like a telephone operator that connects human-legible names to their machine-friendly counterparts. Using a network of servers, the DNS “translates” a URL, like CoinDesk.com, into its standardized IP address, like 52.85.84.3.

This is critical, as anyone who’s tried to memorize their alphanumerical wallet address knows: human beings aren’t equipped to keep a string of numbers in their heads.

Like most of the current internet infrastructure, the DNS is maintained by a few centralized organizations and companies. Chief among them is the Internet Corporation for Assigned Names and Numbers (ICANN), which administers top-level domains (TLD) – or addresses ending in .com and .org.

Handshake partially dismantles this DNS hierarchy. Instead of having to trust ICANN with the responsibility to maintain all TLDs, Handshake records the ownership and location of websites on a blockchain. Users bid on their website names in an auction, using the native HNS token, and register them under a public key on the distributed Handshake network.

Importantly, Handshake isn’t trying to replace the current DNS but supplement it with something more secure and private. To this end, Handshake reserved the Alexa Top 100,000, (the most popular domains) to prevent whales from coming in to squat on them.

McKie said ICANN controls those keys, and the keys to any .com and .net site on the Handshake DNS. (Whether they claim them is an open question, though Handshake will offer an HNS reward if they claim their sites on-chain.)

The protocol went live for miners in early February and began allowing domain name auctions two weeks later. The system worked as promised, said McKie. A number of people have built websites and registered over 125,000 open domains on the system, including hobbyists just saying “hello world” to fellow travelers, as well as someone partaking in the age-old web tradition of claiming they were here first.

Still, access to these sites was a technical affair. To access Handshake sites, people needed to manually reset their DNS resolvers to Handshake, rather than the traditional IP system. Either that, or run a full node.

With a native browser, this friction is eliminated.

“For the Handshake protocol there seems to be a huge vacuum in resolving handshake TLDs. By that I mean a lot of users aren’t tech-savvy and wouldn’t want to run nodes but would love to own domains and browse other Handshake domains,” Joseph Peculiar, Lead Blockchain Engineer at Yellowcard Financial and an early HandyBrowser user, said. 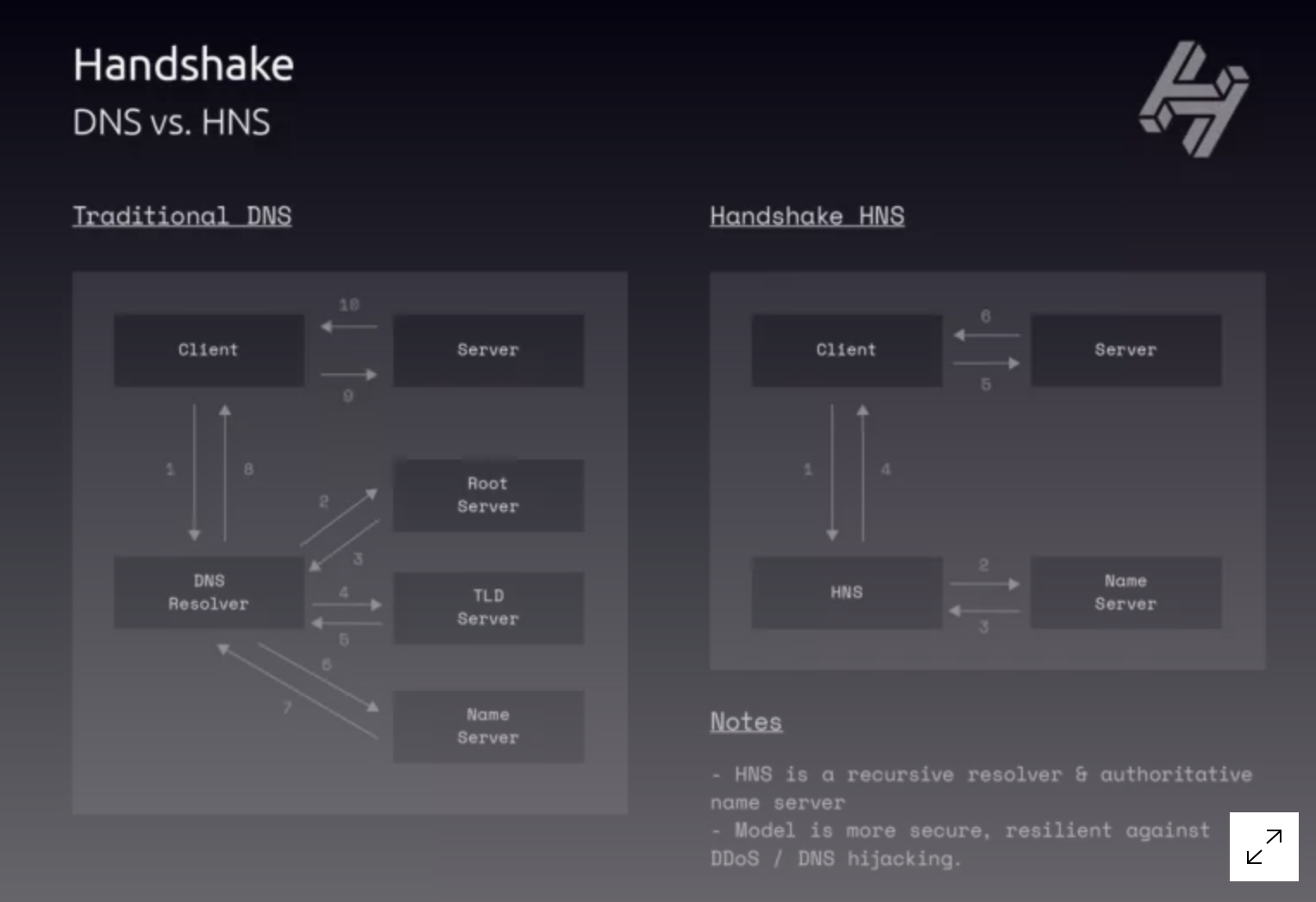 Although HandyBrowser may eventually compete with browsing top-dogs like Chrome, Safari and Opera, it also leverages these systems. “Handshake is designed to be backwards compatible with the existing web and ICANN root when a name isn’t present on Handshake DNS,” McKie said. “You can go to any legacy site.”

It’s this feature, ahead of any possible Handy-chrome-flippening event, that actually proves Handy’s utility already. While censorship isn’t a looming threat in most Western countries, the Freedom on the Net foundation has found over the past two years, authoritarian regimes are increasingly censoring the web and extending their reach over an open internet.

Part of Handshake’s promise is that if a website is inaccessible in a particular country, it will remain accessible as a “redundant mirror.” While only a few businesses – including Brave and Bitcoin.com – have claimed their Handshake names, McKie said the system’s monetary incentives may lead to “people slowly opting in.”

And if enough do, Handshake would not only be “an alternative to the internet, but the trusted alternative,” he said, and ultimately make the internet a more stable environment.

“It’s an organic emergent adoption overtime – just like Bitcoin. You can’t deny it when it works for so long, or so well, especially out of the box,” McKie said.

As with most beta launches, HandyBrowser is currently missing certain conveniences internet users have grown accustomed to, including tab management and certain hotkeys. “It’s a continual work in-progress to build a reference client people will love,” McKie said.

In a bid to attract users, the HandyBrowser team is thinking about building some native Skype-like videoconferencing and messaging tools “to replace many of those centralized middlemen that exist for those services.” But it’s ultimately an experiment in proving useability.

Success under this method ranges from enticing a few crypto-curious web developers to contribute a little code, to convincing Google to begin resolving Handshake names behind 8.8.8.8 or CloudFlare’s behind 1.1.1.1.

“As long as the web gets better, and Handshake is part of the equation, that’s all that matters,” McKie said.