After plunging in March alongside other markets, the cryptocurrency has rebounded, extending its gain for the year to 65%. Bitcoin Is Riding High Again As Investors Embrace Risk 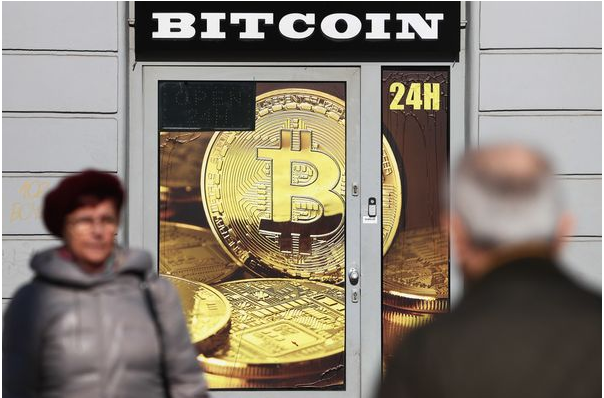 Bitcoin Has Tripled In Value Since March, As Investors And Speculators Bet The Cryptocurrency Will Continue To Rise Amid Record-Low Government Bond Yields.

The market boom that pushed stocks, bonds and commodities to their best combined four-month spurt in decades has found its way into the most notoriously volatile and speculative asset on the planet: bitcoin.

While volatility is nothing new for bitcoin, the latest run came abruptly. Since surging on a wild boom in 2017, bitcoin and its cryptocurrency peers have been largely flying under the radar. Meanwhile, companies including Facebook Inc. and central banks have got most of the attention as they build their own digital currencies.

That has changed since markets cratered in March. The Federal Reserve stepped in with trillions of dollars of support to prop up the capital markets during the coronavirus pandemic, pushing government bond yields to record lows and forcing investors to scramble for yield elsewhere. 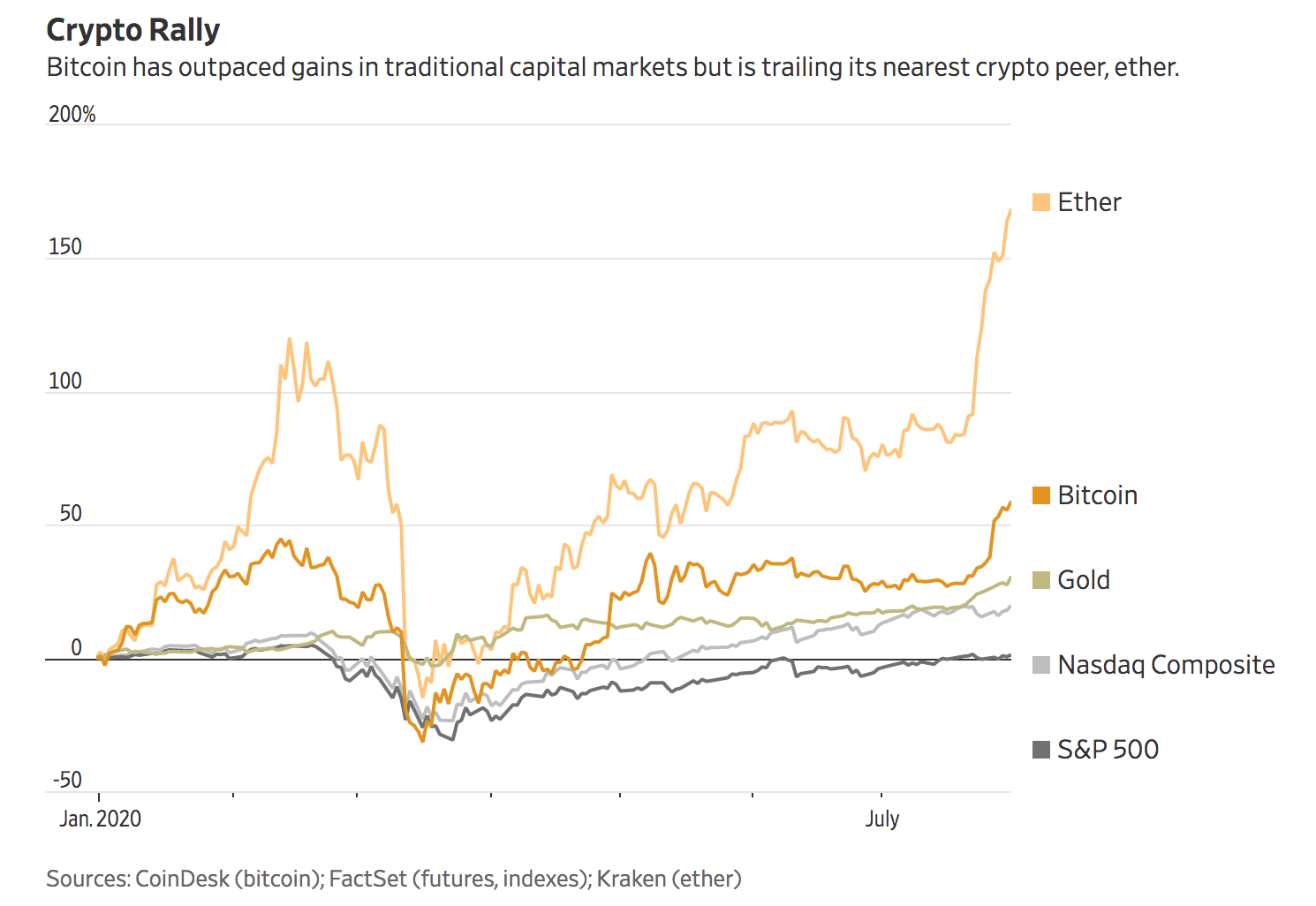 “People are trying to jump on momentum,” said Mati Greenspan, a crypto investor who publishes the Quantum Economics newsletter. “The entire crypto market is a microcosm of everything happening in stocks.”

That momentum drove up assets across the board over the past four months. The S&P 500 rose 27%, the S&P GSCI commodities index climbed 33% and the Bloomberg Barclays US Aggregate Bond Index added 3.3%. That is the best combined four-month performance for those indexes since at least 1976.

Yet those gains all pale next to bitcoin. Since hitting its own recent low on March 13 of $3,867, bitcoin has tripled. Although some investors predicted bitcoin would upend global finance and replace the dollar, it has yet to emerge as a mainstream money system and is still trading well below its late 2017 peak when it approached $20,000. It has, however, become a verdant field for speculators and volatility junkies. 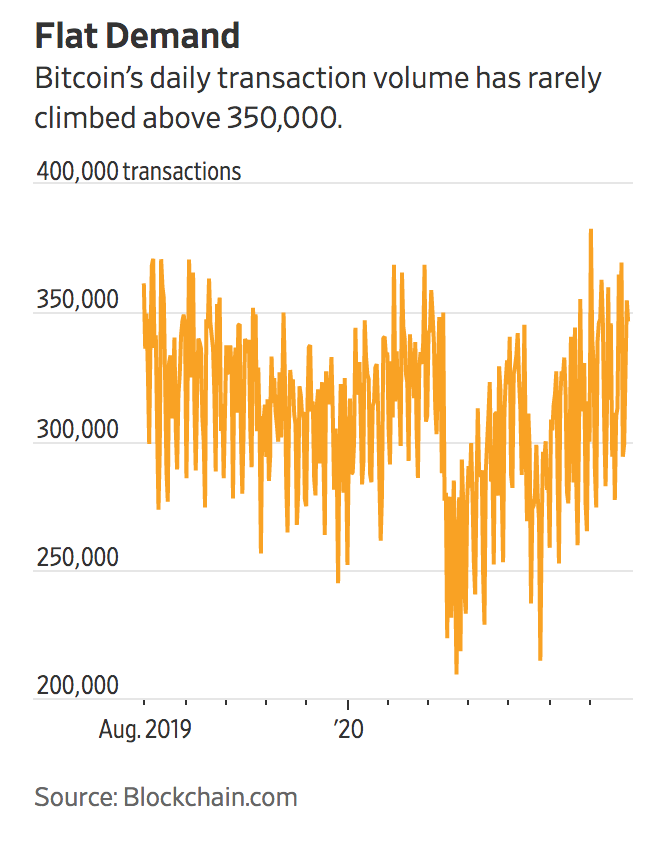 Speculators are betting bitcoin prices will continue rising for many of the same reasons assets such as gold and equities are rising: a weak global economy forcing central-bank intervention, falling interest rates and the drop in the dollar.

Its volatility and potential for outsize gains make bitcoin more enticing to some investors, and money from traditional markets is finding its way into cryptocurrencies. In the second quarter, investors put about $900 million into crypto funds operated by Grayscale Investments LLC, which offers investment funds focused on cryptocurrencies. About 57% of investors were new, the firm said.

It sells a number of funds, including the Grayscale Bitcoin Trust, its largest. Although tiny compared with traditional ETFs, the recent inflows swelled its total assets under management to about $4 billion.

The other driver of bitcoin’s recent gains is an emerging trend within the crypto sector itself, a surge of trading that has been enabled by a new crop of specialized apps. Nicknamed “DeFi,” for decentralized finance, these apps and services mainly facilitate borrowing, lending and trading crypto assets. They have given traders more ammunition to leverage up and make increasingly risky, and potentially lucrative, options bets and arbitrage plays on a range of cryptocurrencies.

There has been a burst of firms offering these services. Most operate over the Ethereum network, in which the in-house cryptocurrency, ether, has surged to $344. It is up more than 150% year to date, and 287% from its low of $89 on March 13, outpacing bitcoin’s gains. 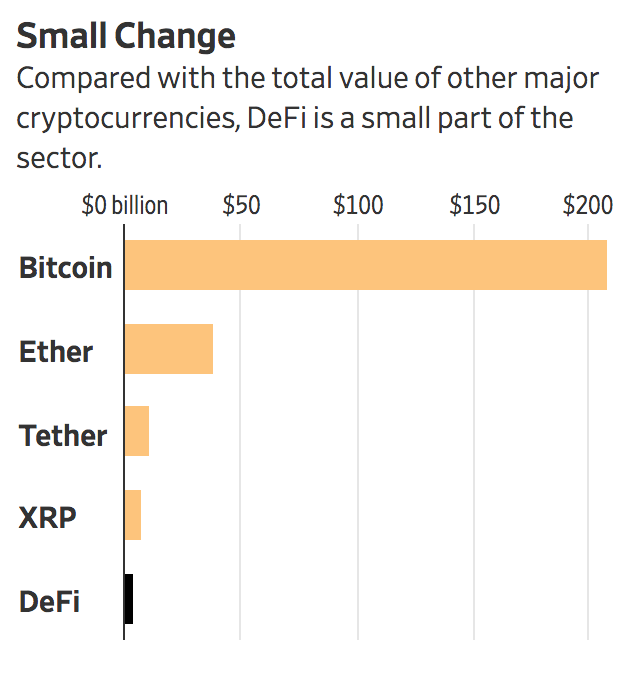 Unlike some past hot ideas in the sector, DeFi services are up and running with customers. They could eventually be the underpinning of a range of alternative financial services, said Eric Turner, an analyst at research firm Messari.

And it isn’t clear DeFi is drawing a significant amount of new interest to the sector. The number of daily transactions on the bitcoin blockchain has rarely exceeded 350,000 at any point over the past year. If that is the case, this could just be the crypto sector once again spinning its wheels.