Trade disputes over agriculture add pain to low commodity prices that have been grinding down American farmers for years. This One Here Is Gonna Kick My Butt—Farm Belt Bankruptcies Are Soaring

A wave of bankruptcies is sweeping the U.S. Farm Belt as trade disputes add pain to the low commodity prices that have been grinding down American farmers for years.

Homes And Farms Where Families Go Off the Grid (Agrivoltaics)

Farms, More Productive Than Ever, Are Poisoning Drinking Water in Rural America

Throughout much of the Midwest, U.S. farmers are filing for chapter 12 bankruptcy protection at levels not seen for at least a decade, a review of federal data shows.

Bankruptcies in three regions covering major farm states last year rose to the highest level in at least 10 years. The Seventh Circuit Court of Appeals, which includes Illinois, Indiana and Wisconsin, had double the bankruptcies in 2018 compared with 2008.

States in those circuits accounted for nearly half of all sales of U.S. farm products in 2017, according to U.S. Department of Agriculture data.

The rise in farm bankruptcies represents a reckoning for rural America, which has suffered a multiyear slump in prices for corn, soybeans and other farm commodities touched off by a world-wide glut, made worse by growing competition from agriculture powerhouses such as Russia and Brazil.

Trade disputes under the Trump administration with major buyers of U.S. farm goods, such as China and Mexico, have further roiled agricultural markets and pressured farmers’ incomes.

Prices for soybeans and hogs plummeted after those countries retaliated against U.S. steel and aluminum tariffs by imposing duties on U.S. products like oilseeds and pork, slashing shipments to big buyers.

Low milk prices are driving dairy farmers out of business in a market that’s also struggling with retaliatory tariffs on U.S. cheese from Mexico and China. Tariffs on U.S. pork have helped contribute to a record buildup in U.S. meat supplies, leading to lower prices for beef and chicken.

Agribusinesses such as Archer Daniels Midland Co., Bunge Ltd. and Cargill Inc. are feeling the heat, too. Even though lower crop prices translate into less-expensive raw materials for the commodity buyers, tariffs impact the global flow of goods and in some cases drive down prices, cutting into profits.

For Nebraska farmer Kirk Duensing, filing for bankruptcy was a last resort, his only choice after several years of low corn and soybean prices meant too many bills he couldn’t pay.

Mr. Duensing has managed to keep farming, hiring himself out to plant crops for other farmers for extra income and borrowing from an investment group at an interest rate twice as high as offered by traditional lenders. Despite selling some land and equipment, Mr. Duensing remains more than $1 million in debt.

“I’ve been through several dips in 40 years,” said Mr. Duensing. “This one here is gonna kick my butt.”

More than half of U.S. farm households lost money farming in recent years, according to the USDA, which estimated that median farm income for U.S. farm households was negative $1,548 in 2018. Farm incomes have slid despite record productivity on American farms, because oversupply drives down commodity prices.

Chapter 12 bankruptcy, created during the 1980s farm crisis, allows distressed family farmers or fishermen to devise a plan to repay creditors over three to five years. Only farms with debts that don’t exceed about $4.1 million may file for the protection.

U.S. farm debt—covering operations, land, equipment, livestock and more—last year climbed to more than $409 billion, according to a USDA forecast. That’s the largest sum in nearly four decades and a level not seen since the 1980s, when farmland values plunged and interest rates skyrocketed, boosting debts and pushing many farmers and lenders out of business.

Nationwide, the volume of loans to fund current operating expenses grew 22% in the fourth quarter from year-ago levels, hitting a quarterly record of $58.7 billion, according to the Federal Reserve Bank of Kansas City. The average size of these loans rose to $74,190, the highest fourth-quarter level in history when adjusted for inflation, the bank said.

To stay in business, some farmers have sold second homes purchased during a prosperous period earlier in the decade. They or their spouses have sought off-farm jobs to bring in additional income or pay for health insurance. Others have shrunk their operations, giving up rented ground or selling equipment to lower debt loads. Those struggles are driving consolidation, shifting a greater number of acres under fewer, larger farms.

Agricultural lenders, bankruptcy attorneys and farm advisers warn further bankruptcies are in the offing as more farmers shed assets and get deeper in debt, and banks deny the funds needed to plant a crop this spring.

“We are seeing producers who are running out of options,” said Tim Koch, senior vice president at Omaha, Neb.-based Farm Credit Services of America, which lends to farmers and ranchers in Iowa, Nebraska, South Dakota and Wyoming.

He said bankruptcy filings among the bank’s customers doubled last year compared with 2017, though they still represent a tiny fraction of its overall portfolio. Anticipating the rough patch, the bank three years ago added 30 lenders to focus exclusively on stressed accounts, and dedicated a team of a dozen analysts to such accounts.

Curt Hudnutt, who oversees rural banking for Rabobank North America, one of the biggest U.S. farm lenders, said that while its losses have been minimal so far, the bank’s farm-loan portfolio is deteriorating and he expects bankruptcies to increase among U.S. farmers this year.

“We thought 2019 would be the year things turned around,” said Mr. Hudnutt. “Then the trade dispute happened and that really put a damper on things.”

Chapter 12 bankruptcy filings, used by farmers, have turned higher, and filings in three high-production regions in Midwest farm country are at levels not seen in at least a decade.

Nathan Kauffman, Omaha branch executive at the Kansas City Fed, called the recent rise in bankruptcies modest. He said that while further increases are likely, he doesn’t anticipate a sharp jump in filings, though the downturn in agriculture could drag on for years to come.

The slump in commodity prices followed a period of historic profitability in the Farm Belt, which left operators with significant cash reserves. Interest rates, while on the rise, have remained relatively low. Farmland values, a major factor in a farm’s net worth, have declined modestly, as demand for land continues from fund investors and large farms that are still well capitalized.

Chapter 12 filings last year in seven farm states—all within the 7th, 8th and 10th circuits—hit their highest levels in a decade. These states make up a big portion of the country’s grain and meat sales.

Joe Peiffer, a Cedar Rapids, Iowa-based attorney, said his office is the busiest—and most profitable—it has ever been. Just before Christmas, he sent letters to eight farmers declining to represent them because he didn’t have sufficient staff to handle their cases promptly. He is doubling his office space and interviewing new attorneys to join the firm.

One factor driving bankruptcies is tighter lending standards, said Mr. Peiffer, including at agricultural banks, which are under pressure from regulators to exercise greater caution over their farm-loan portfolios.

“I’m dealing with people on century farms who may be losing them,” said Mr. Peiffer, whose own father sold his farm in the late 1980s.

Conversations with distressed farmers have become more frequent for Frank Friar, a retired agricultural lender who mans phones at the Wisconsin Farm Center. The organization advises dairy farmers and crop producers on financing options, bankruptcy and when to leave the farm behind. Last year, it received more than 2,300 calls, the most since 2010, and the center has hired more staff in the past two years.

About a dozen times a year, Mr. Friar and his colleagues talk with a farmer who seems to be contemplating suicide, he said. The center’s staff often calls family members or neighbors who can check on the farmers, and sometimes Mr. Friar drives out to farms himself. “The uncertainty, will they survive on the home farm, is [causing] more people to think negatively,” Mr. Friar said.

It was a Sunday in April 2017 when a queasy feeling in Darrell Crapp’s stomach sent him rushing home. He found his wife, Diana, lying crumpled on the floor of their Lancaster, Wis., bathroom. She had swallowed a handful of pills.

Overwhelmed with debt and with little prospect of turning a profit that year, the Crapps knew BMO Harris Bank NA wouldn’t lend them money to plant. The bank had frozen the farm’s checking account.

Mrs. Crapp managed the fifth-generation corn, cattle and hog farm’s books. She had stayed up nights drafting dozens of budgets to try to stave off disaster, including 30-day, 60-day and 90-day budgets.

Crapp Farms filed for chapter 11 bankruptcy the next month, with a total debt of $36 million.

In a written statement, Patrick O’Herlihy, a BMO spokesman, said the bank doesn’t comment on specific customer relationships but strives to “approach every situation with empathy, and to help our customers manage challenging financial situations.” He said the bank had been working in the agricultural sector for more than a century and was committed to the industry.

At its height, Mr. Crapp and his two sons had grown crops on 17,000 acres. The farm’s last 197 acres, homesteaded by Mr. Crapp’s ancestors in the 1860s, will likely be auctioned this month.

Mr. Crapp now sells farmland for a regional realty company and helps run the family’s trucking business, which transports grain and livestock feed for area farmers. His younger son drives trucks for the company. His older son repairs grain storage bins. Mr. Crapp said he would have to file bankruptcy again—likely under chapter 12—to discharge his remaining debts.

“We haven’t won very many battles,” said Mr. Crapp. “The bank pretty much owns us.” 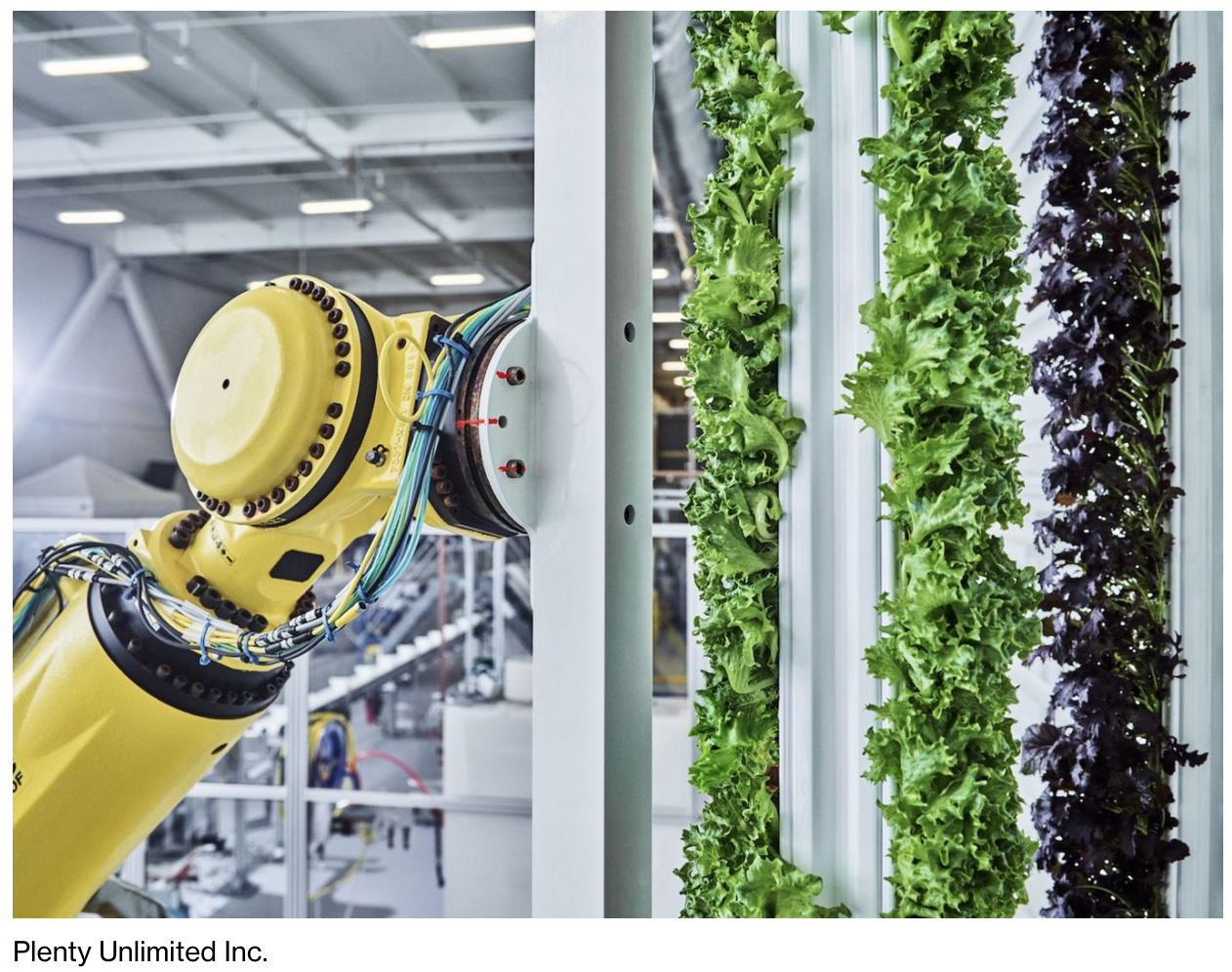 The $300 million, 120-acre facility in Virginia will grow crops including strawberries, leafy greens and tomatoes.

The $300 million facility will grow multiple crops, including leafy greens and tomatoes, starting with a Driscoll’s strawberry farm in the winter of 2023-2024.

The company says the project, expected to produce up to 20 million pounds of produce annually, will also create 300 new jobs. 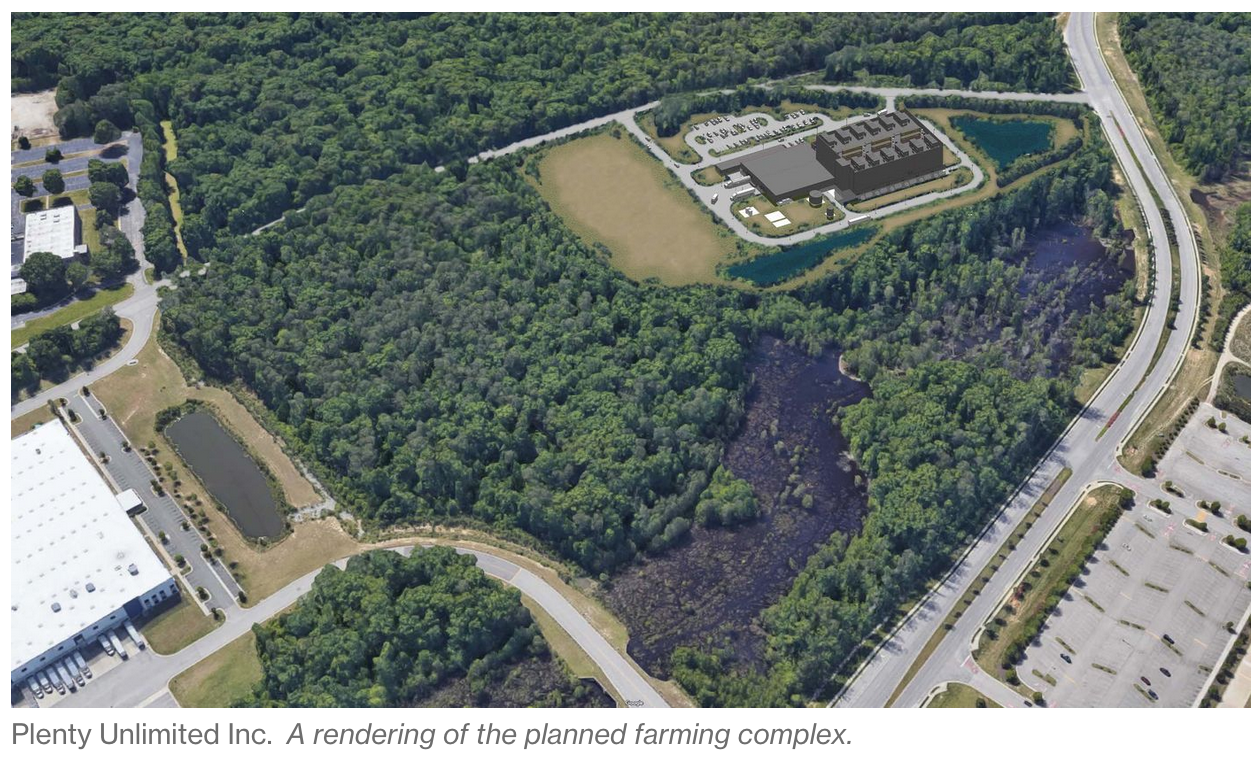 The farm complex will include 30-foot climate-controlled and pesticide-free grow towers that maximize light exposure for crops, which will be tended to in part by tall robotic arms.

Based in California, Plenty recently closed a $400 million Series E funding round, which it says is the largest investment in an indoor farming company to date. The company claims to get up to 350 times the yield per acre of traditional farms.

“We solve for the ability to have fresh produce, fruits and vegetables, grown anywhere, pretty much for everyone,” said Arama Kukutai, the company’s chief executive officer.

More than 2,000 vertical farms are already filling plates across the US. While indoor farms use much less water and land than conventional ones — and tend to save on transportation costs thanks to closer proximity to consumers — they also typically require large energy inputs. Plenty uses 100% renewable power for its San Francisco farm, according to its website.

Investor interest in the vertical farming sector has picked up as record heat and droughts underscore the vulnerability of the global food supply. New York-based Gotham Greens raised more than $310 million in its latest funding round, the company said earlier this week.

Poll: How Likely Are You To Eat Cell-Based Meat?