Not everyone’s idea of paradise includes palm trees and relaxing on the beach. When my husband, Jim, and I decided—during a shared midlife crisis—that we should retire and move abroad, we chose something a little more unconventional than the Caribbean. Profit From Southern BBQ In South America

We first discovered Chile while prowling around the southern cone of South America and we were immediately captivated by it. Chile is one of the safest and most stable countries in Latin America. It has a strong growing economy; a small, stable government, with little corruption; it’s welcoming of North American expats; and, of course, it has the spectacular Andes Mountains and rugged Pacific coastline. 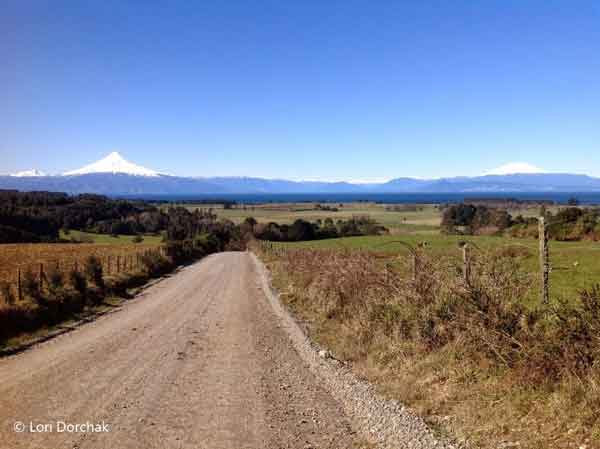 Circumstances led us to the marvelous beauty of the Los Lagos region, with its crystal-clear lakes surrounded by snow-capped mountains. The mild year-round climate means that we have no extremes to deal with, though in the winter it rains quite a bit, similar to the Pacific northwest of the U.S.

The cost of living outside of the cities is very affordable and a couple could live comfortably on $2,000 per month. Chile is a modern country, with good internet and cell coverage, well-maintained roads, and a good healthcare system.

When we retired here six years ago with our small annuity, we expected that we could easily supplement our income with a small business. As retirees who love food, we had spent a lot of time in the kitchen, cooking and creating, so that was a natural place for us to focus our business efforts. One of our favorite foods that we missed from the South was a good barbecue sauce. After nailing down a consistent recipe, we started sharing our sauce among our friends in the city of Frutillar, and the response was quite amazing. Once people figured out what to do with it, they were excited and wanted more. So, we made up a label and started selling it locally and giving out free samples wherever we went. The King of Sauce Chile barbecue sauce and catering business was born. “BBQ sauce so good it will make you cry” is what Jim likes to say.

Cooking barbecue for friends opened up more doors for us. We were asked to cater an event for a local rugby team—150 hungry rugby players and their families. This event prompted us to upgrade our special custom-built grill. We had it built three years ago just for our personal use to feed family and friends, but it was large enough to use for bigger groups. We had it put on wheels and added a trailer hitch and a basket for firewood, plus a cabinet for spices and tools, and a rack on the back for folding tables. 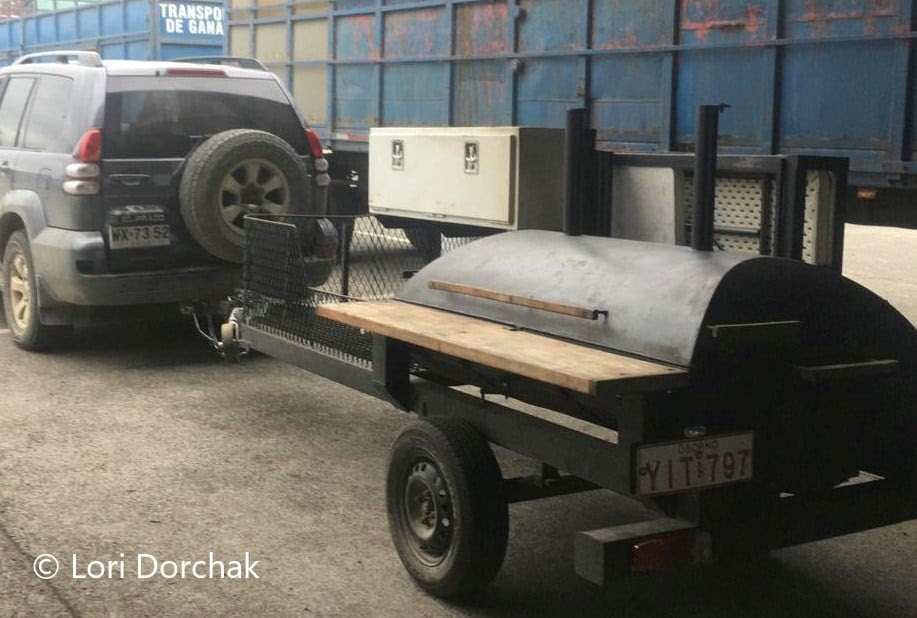 The rugby event was quite successful and led to another catering event for a Netflix movie crew who had seen one of our videos on Youtube. So we are now taking the business up a notch. We are currently working on a commercial kitchen. It needs to have tile floors, washable walls, a bathroom with sink and toilet, a chlorinated water system, etc. We are converting a 20 foot container that we use to house our solar system. If we can have the health department certification on our label, we will be able to sell our sauce in stores, which would enable us to expand the business with less work.

We feel we are onto something good and want to build up the business for our young son Thomas to take over when he grows up.

Sharing good food is something we enjoy, and while it provides us with a bit of extra income, the important part is that it’s fun and only requires as much work as we want to put into it. After all, we are retired.

These Arizona Retirees ‘Couldn’t Afford’ America — Now They Live Their Dream Life On $2,000 A Month In Ecuador

They haven’t been back to the U.S. in years, and say they don’t miss it much — except for Home Depot and some friends.

At 72, Jacqueline Mackenzie has lived in nearly every state in the U.S. (her father was in the military and moved the family often), spent six years in Mexico and traveled all over the world.

But it’s in Vilcabamba — an Andean foothills town in southern Ecuador — where the retired teacher plans to spend the rest of her life.

“The climate is just unbelievable — never below 58 [degrees Fahrenheit] or above 86,” says Mackenzie, who moved to Ecuador with her husband, Don, in 2013. Jacqueline, who loves to garden, adds: “You can grow 365 days a year. It is a gardener’s paradise.”

Our friends think we are crazy, but they also envy us. An alternative lifestyle can be going overseas, but you can also go overseas and be alternative. We do both.’

Though Vilcabamba is small (the town and surrounding valleys are home to about 4,000 residents), plenty of expats, particularly Americans, Canadians and Europeans, live there: “There are a lot of aging hippies,” Jacqueline jokes. Vilcabamba is particularly appealing to people who love an outdoorsy lifestyle — hiking and bird watching are popular here — and it, along with most of Ecuador, has a strong ecological bent. In 2008, Ecuador was believed to have become the first country in the world to extend constitutional rights to nature, with one passage of the document spelling out that nature “has the right to exist, persist, maintain and regenerate its vital cycles, structure, functions and its processes in evolution,” as the New York Times reported at the time.

This ecological leaning is one of the big reasons the Mackenzies moved to the country. They live in a so-called eco-village — residents here seek to have minimal impact on the natural environment and give back to the planet. “We do what we can in whatever way we can to live a life that’s less consumerist,” Jacqueline says.

That means they grow much of their own food, live in a home made of sustainable wood and stone, have a composting toilet, get their electricity from wind and water, and don’t have a hot-water heater (the water is heated by the sun). Jacqueline explains: “We try to live a very simple life.”

It’s a life they say they adore — since 2013, Jacqueline has only been back to the United States once, and Don hasn’t been back at all since then. Though this, of course, is not for everyone. The town is small, and some say it’s too good to be true. Still, as Don points out, “the air is so clean, and I can’t get over the intensity of the blue sky.” And Jacqueline jokes that because even their grandkids are now grown, “we are just working at living.”

What Do You Spend Each Month?

The Mackenzies live on about $2,000 a month, most of that coming from Don’s pension (he’s retired from the military), they say. “We couldn’t afford the States, but here we are rich,” Jacqueline says — adding that they now live in a home with a “million-dollar view.”

Their biggest expense when they first moved to Ecuador was rent: They paid $400 a month for a three-bedroom house on a quarter-acre of land before they moved to the eco-village last year; now they don’t pay rent, having built their home for about $38,000. They lease the land for free because they help out at the eco-village; when they die their home and most of its contents will go to the owner of the eco-village. They paid for the house through a combination of savings and loans.

Now they spend the biggest proportion of their money on food — roughly $375 a month — in part because, as Jacqueline says, they are committed to eating organic whenever they can. Other significant expenses include transportation — they don’t own a car but spend about $350 a month on taxis — and health insurance. That costs them about $100 a month, though they do have out-of-pocket health-care costs like doctor’s appointments and prescriptions, which can add up. Internet service costs them a little over $80 a month, and a mobile-phone plan costs $28 a month. They also spend money on things like gardening tools, gardeners, seeds, trees and soil.

In addition to their simple lifestyle, they save money by not having a television — “we’ve not had access to a TV for eight months, so we are entertained by nature’s sunrises and sunsets,” Jacqueline says — and by not traveling a lot and not eating out. “We like the rural lifestyle,” says Jacqueline. “Eating out is not a big deal to us. We’ve already been to bazillions of concerts and plays. Now we listen to music with a glass of wine on the patio.”

The Mackenzies say thus far they’ve been impressed with Ecuador’s health-care system. They both have insurance through Ecuador’s government (which costs about $100 a month total), and their out-of-pocket costs haven’t been too bad. When she had her hip replaced a few years back in Guayaquil, the second largest city in Ecuador, Jacqueline says the out-of-pocket costs were about $1,800. But because they live in a small town, they do have to travel about an hour for some surgeries (when Don had an operation a few years back, he did so in the nearby city of Loja).

How Hard Is It To Get Residency?

“It’s a nightmare,” Jacqueline says. “It is complicated.” This resource can help you figure out what you might need if you want to stay for an extended period or become a permanent resident.

What Do You Miss About The United States?

“Not the politics,” jokes Jacqueline — who says it’s her friends she misses most. “I do my best to stay in touch but I do miss them.” For Don, it’s Home Depot HD, -0.04% — “getting parts for building is difficult here, it can take two to three months.”

Despite the great weather and their simple lifestyle — both of which they embrace — Jacqueline and Don say it’s the people they love most. Don gets together every Sunday with a group of about a dozen expats for brunch “to resolve the world’s problems,” he jokes. And Jacqueline is a member of a “sister circle” of roughly a dozen women where “we try to be as emotionally supportive as possible.” Plus, young people from all over the world come to visit the eco-village, so sometimes “there might be five different languages spoken over one meal,” Jacqueline says.

“Our friends [in the U.S.] think we are crazy, but they also envy us,” Jacqueline says. “An alternative lifestyle can be going overseas, but you can also go overseas and be alternative. We do both.”

A Custom Tour in Ecuador That You Won’t Believe Exists

Living off the Land in Low-Cost Alpujarra, Spain