After new tax law made it costlier to own a house in many high-price areas, some residents are pulling up stakes. So Long, California? Goodbye, Texas? Taxpayers Decide Some States Aren’t Worth It (#GotBitcoin?)

Larry Belardi and Bobbie LaPorte are longtime San Francisco residents, but they are planning to leave California for Nevada next year. 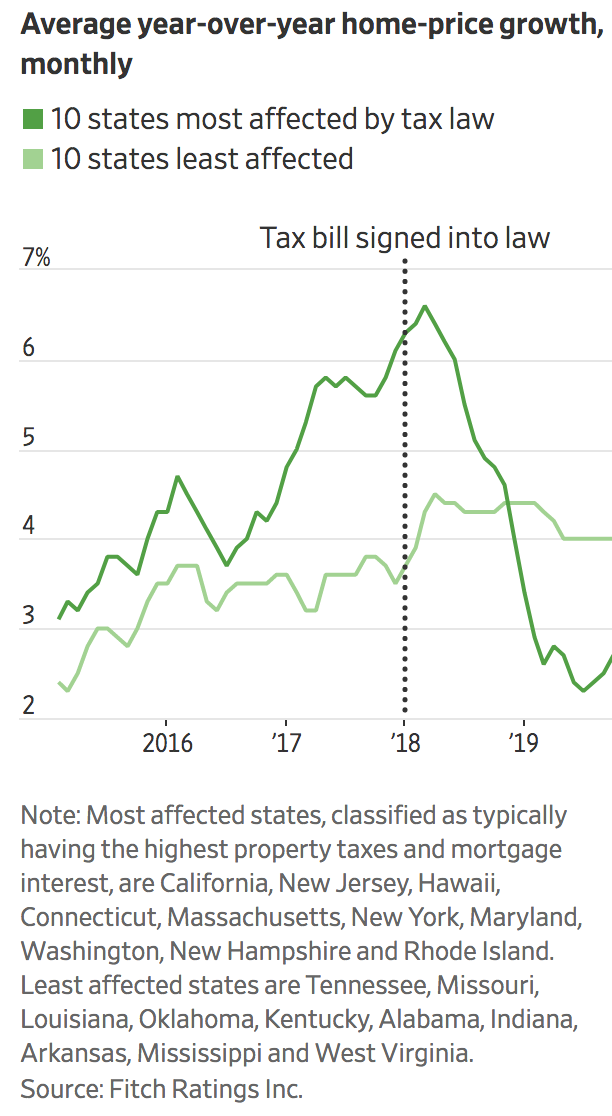 A turning point was the federal tax overhaul that Congress passed in late 2017. The law made it costlier to own a house in many high-price, high-tax areas, reshaping the economics of homeownership in those slices of the U.S.

Two years after President Trump signed the tax law, its effects are rippling through local economies and housing markets, pushing some people to move from high-tax states where they have long lived. Parts of Florida, for example, are getting an influx of buyers from states such as New York, New Jersey and Illinois.

Many people saw their overall taxes go down after the 2017 law was passed. But the law had two main changes making it tougher to live in high-cost, high-tax states, especially compared with lower-taxed options. It essentially curbed how much homeowners can subtract from their federal taxes for paying local property and income taxes, by capping the state and local tax deduction at $10,000. It also lowered the size of mortgages for which new buyers can deduct the interest, to $750,000 from $1 million.

These changes have the biggest impact on a sliver of the population who have high incomes and live in expensive areas. They tend to have white-collar jobs and the ability to pick up and move. Many own their own businesses, work remotely or are nearing retirement.

Critics say the changes have hurt everyone who lives in high-tax states, by taking a bite out of tax revenue. New York Gov. Andrew Cuomo, for example, panned the state and local tax cap last year. “It has redistributed wealth in this nation from Democratic states—we’re also called blue states—to red states,” he said at the time.

The average property tax bill in the U.S. in 2018 was about $3,500, according to Attom Data Solutions, a real-estate data firm. But many residents in New York, New Jersey, Connecticut and California had been deducting well over $10,000 a year. In Westchester County, N.Y., the average property-tax bill was more than $17,000, the highest in the country.

Among the people who are uprooting, many say they had long considered a change. But they saw the tax law as a reason to finally undertake the potentially difficult task of changing their state residency.

“It was another bucket of straw on the back of the camel,” said John Lee, a wealth-management executive and longtime resident of the Sacramento, Calif., area. Mr. Lee and his wife, Tracy, moved their primary residence last winter to Incline Village, a resort community on the Nevada side of Lake Tahoe.

The Lees kept their California home, where one of their six adult children is living. That means they are still paying California property taxes. But Mr. Lee estimates the move to Nevada, which has no state income tax, whacked his state tax bill by 90%.

In the 10 states that typically have the highest property taxes and mortgage interest amounts, including California, New York and Massachusetts, home-price growth dropped right after the tax law passed, according to an analysis by Fitch Ratings Inc.

Home-price growth held steady for the 10 states that typically have the lowest property taxes and mortgage-interest amounts, including Tennessee, Missouri and Alabama.

Other factors affected home prices too, such as an oversupply of high-end homes and rising mortgage rates at the end of 2018. But the tax law played a key role, Fitch found.

Rick Bechtel, head of U.S. residential lending at TD Bank, lives in the Chicago area and said he recently went to a party where it felt like everyone was planning their moves to Florida. “It’s unbelievable to me the number of conversations that I’m listening to that begin with ‘When are you leaving?’ and ‘Where are you going?’ ” he said. 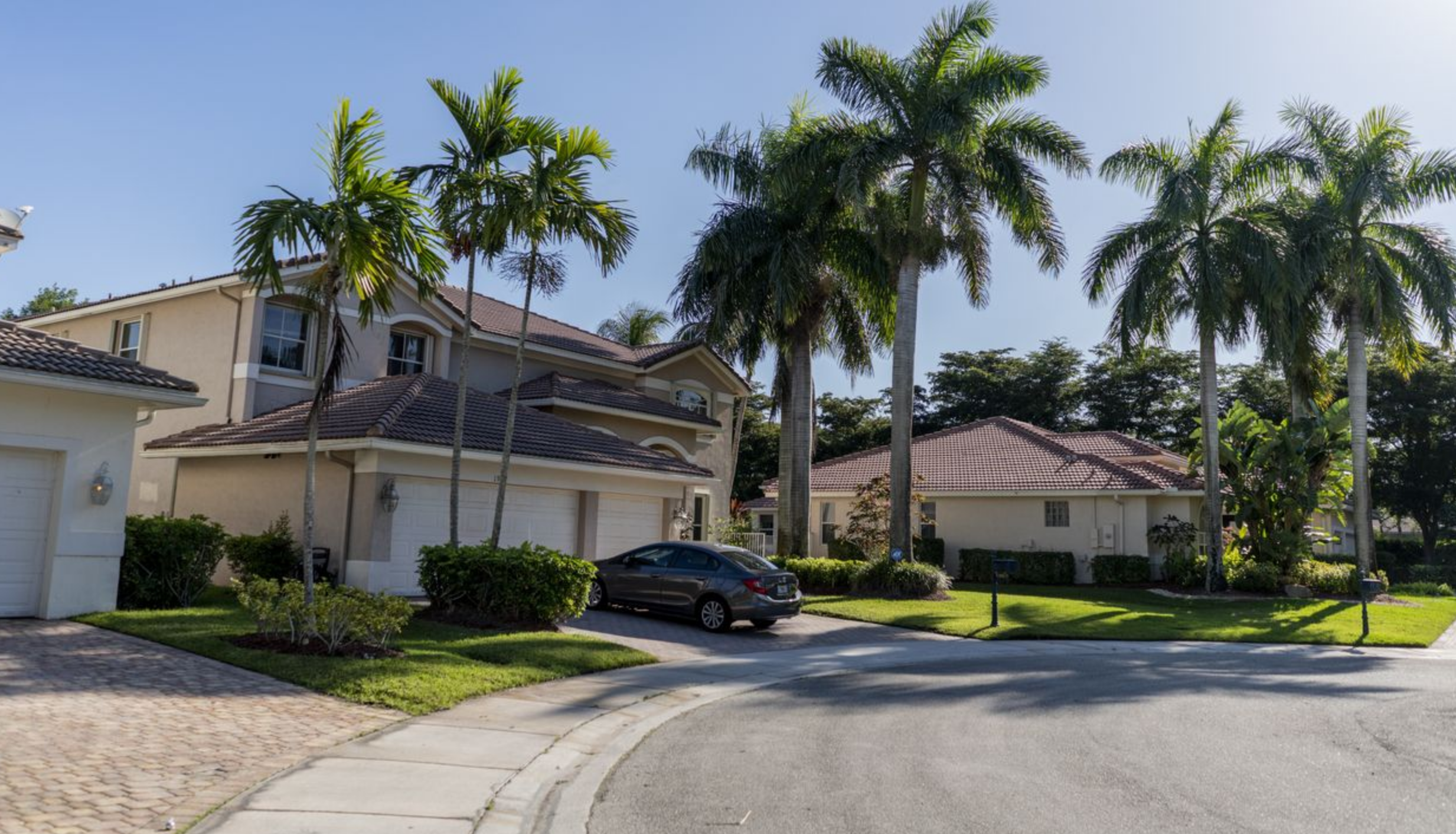 Mr. Navarro’s House, Far Right, In Weston, Fla. He Expects Lower Property Taxes Than In Texas, Where He Was Paying More Than $25,000 Annually.

The dynamic is affecting even states typically thought to have low taxes. Mauricio Navarro and his family left Texas last year for Weston, Fla. Neither state collects its own income tax, but Mr. Navarro was paying more than $25,000 annually in property taxes in the Houston area, he said. Texas ranks among the states with the highest share of taxpayers who pay more than $10,000 in property taxes, according to the National Association of Home Builders.

Filling out his 2018 tax returns helped motivate him to move with his wife and two children, said Mr. Navarro, who owns a software-development business.

“It was not that we were struggling,” he said. “It’s that we did some analysis.”

Mr. Navarro is renting but plans to eventually buy a home in Florida. He expects his property tax bill will be lower than it was in Texas.

Some of the most pronounced effects are playing out between states with vastly different income-tax regimes. 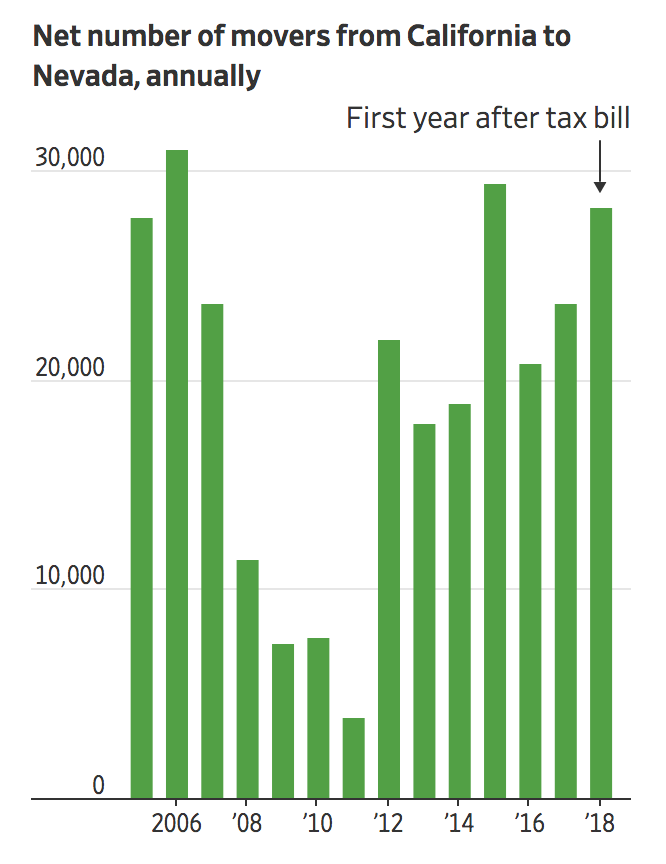 California has lost residents to Nevada for years, but that accelerated after the tax law passed. Nevada picked up a net of 28,000 people from California in 2018, according to the U.S. Census Bureau. That is the second-highest year since before the financial crisis.

Nevada home prices rose more than 12% from the end of 2017 to November, roughly double the change in California prices, according to online real-estate company Zillow Group Inc.

Ruchelle Stuart, a real-estate broker in Las Vegas, has tailored her business around people looking to move from California. “The reason people from California don’t mind it so much here is that home is only three and half hours away,” she said.

More movers are on the way.

Mr. Belardi and Ms. LaPorte, who are planning to leave San Francisco, recently bought land at Clear Creek. The golf course development, on the Nevada side of Lake Tahoe, advertises that state income taxes are “zilch.” 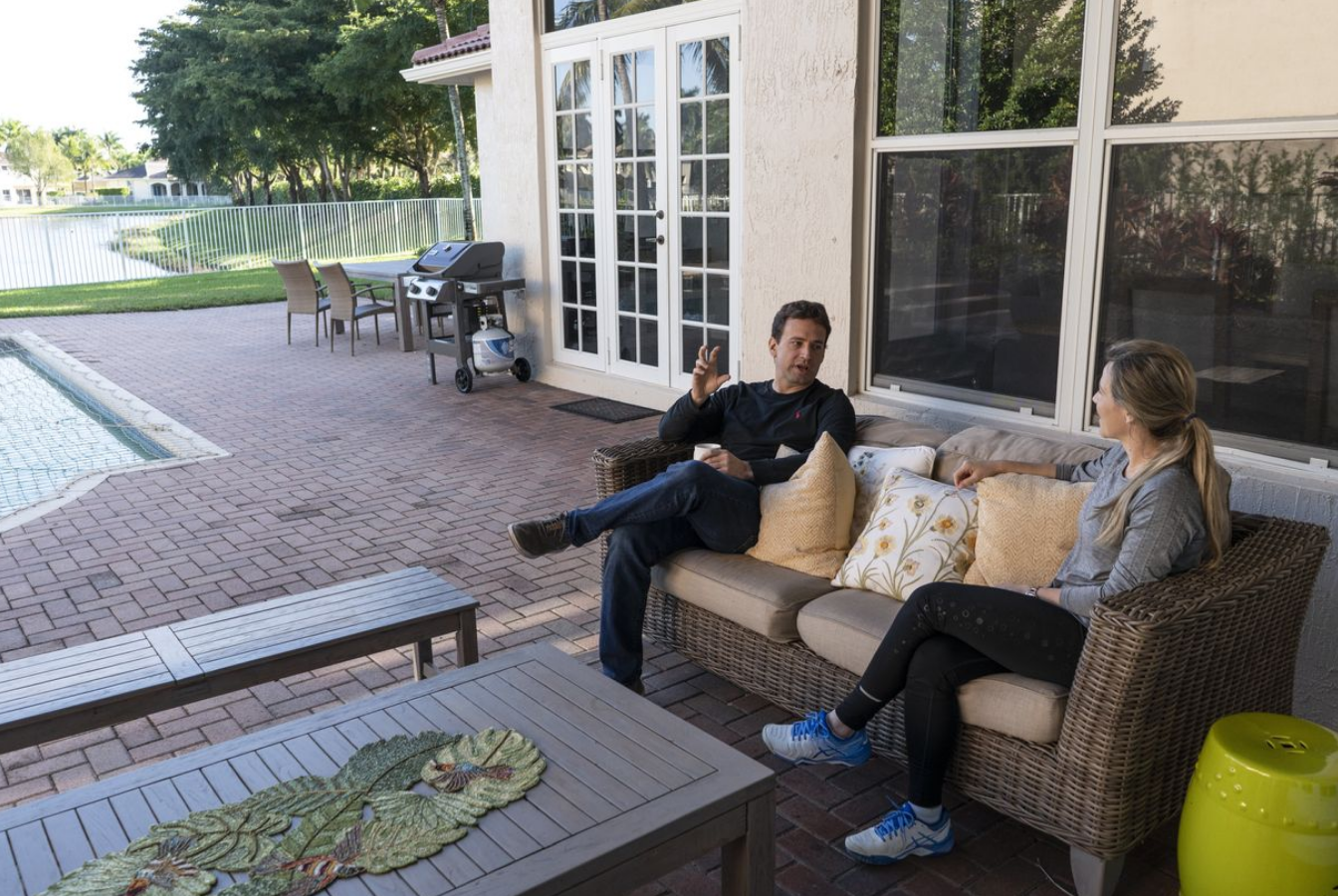 Mr. Navarro With His Wife, Adriana, At Their Florida Home. “It Was Not That We Were Struggling,” He Said Of The Move. “It’s That We Did Some Analysis.”

The couple said that for years they have been growing tired of state and local politics, as well as the difficulty of running their two small businesses in California. Mr. Belardi does construction consulting and Ms. LaPorte has an organizational development advisory business. The 2017 cap on deductions was icing on the cake, they said. They estimate the move will save them tens of thousands of dollars annually.