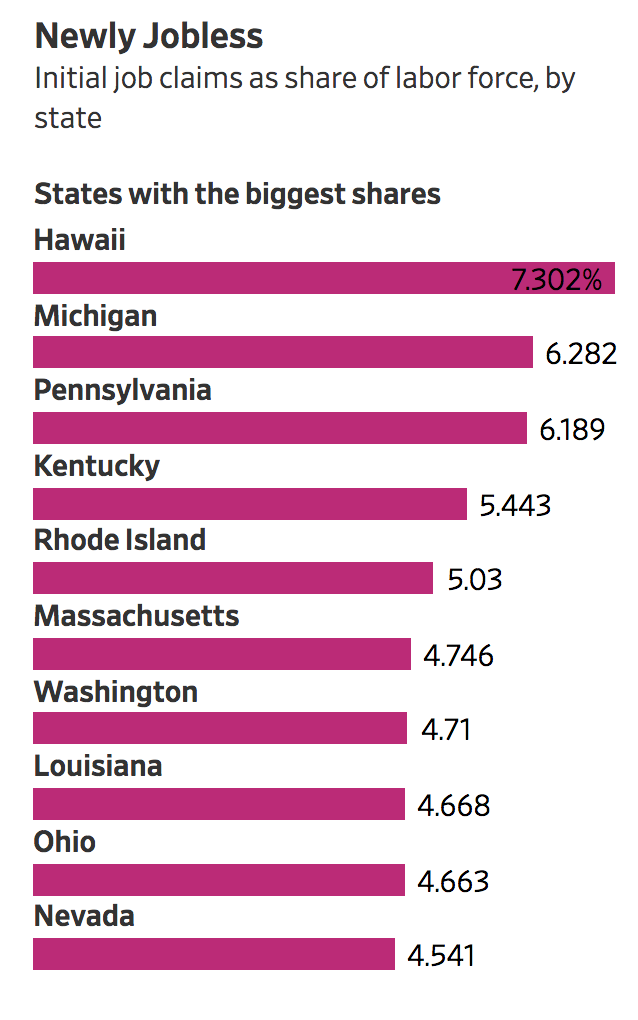 The large number of claims was double the 3.3 million who sought benefits two weeks ago as the U.S. shut down parts of the economy in an effort to contain the virus. Jobless claims, a proxy for layoffs, provide temporary financial assistance for workers who lose their jobs.

About 6% of the U.S. labor force has filed for jobless benefits in the last two weeks, up from 0.3% at the end of February, showing the toll from the coronavirus is gripping an ever-larger share of the U.S. economy. States indicated people from an array of industries—including restaurants, retail, trade and construction—sought unemployment benefits last week.

“The speed and magnitude of the labor market’s decline is unprecedented,” said Constance Hunter, chief economist at KPMG LLP. Ms. Hunter said she expected that millions more claims will be filed in the coming weeks and projects 20 million jobs will be lost. “We didn’t see this in the global financial crisis. We didn’t see this in the Great Depression. There’s been a total decimation of consumption.”

The Congressional Budget Office on Thursday updated economic projections based on the jobless-claims data and recently enacted stimulus measures. It expects U.S. unemployment to exceed 10% in the second quarter and gross domestic product to fall by more than 7%, or an annualized 28%. “Those declines could be much larger, however,” the CBO said, adding that its estimates are “highly uncertain at this time.”

There are several reasons why unemployment claims are likely to remain high in the coming weeks. For one, the federal rescue package signed into law last week increases the pool of workers who can tap benefits by making independent contractors and self-employed individuals eligible. Further, states have continued to tighten lockdown measures, driving more consumers to stay at home and more businesses to close their doors or limit operations.

Some Americans across the U.S. have been unable to successfully apply for unemployment insurance because an unprecedented level of claims is overwhelming state labor department websites and jamming up phone lines.

At a news conference Tuesday, New York Gov. Andrew Cuomo, a Democrat, said the hard-hit state’s site to apply for unemployment benefits was crashing due to unusually high volume. “I apologize for the pain—it must be infuriating to deal with,” he said.

Still, initial claims were dramatically higher in many states last week than two weeks ago, a sign that some states are making progress in processing a deluge of applications.

In California, about 880,000 claims were filed in the week ended March 28. That was up from approximately 190,000 claims in the previous week and the greatest number filed among all states last week. Pennsylvania and New York saw the second and third highest number of claims, respectively.

The record-setting jobless claims filed the last two weeks are unlikely to materialize in Friday’s March jobs report. The monthly unemployment report offers a more comprehensive view of the U.S. labor market, but the timing of the surveys for that data preceded the virus’s widespread impact on the economy.

Renee Munholand, a theater worker who helps hang lights and audio equipment for events in Seattle, successfully filed for unemployment after the city’s concerts and corporate events ground to a halt. She received her first two unemployment checks, which totaled about $1,200, on March 24.

The money is helping, she said, enabling her to make minimum payments on credit cards, buy food and make rent. She said she is keeping her heat turned down to trim costs.

Layoffs have been particularly widespread among small businesses. Such firms operate on lower cash reserves and quickly resorted to layoffs, according to researchers at the University of North Carolina’s Kenan-Flagler Business School. They estimated that up to 6.6 million small-business employees were immediately laid off when state governments in March began mandating businesses close to contain the virus’s spread.

Employees at small businesses tend to be lower-skill workers who suffer most from layoffs, said Paige Ouimet, a finance professor at the University of North Carolina at Chapel Hill’s business school.

“It’s sort of a double whammy that we’re expecting the biggest layoffs to occur for the type of worker it’s going to be most painful for,” she said. 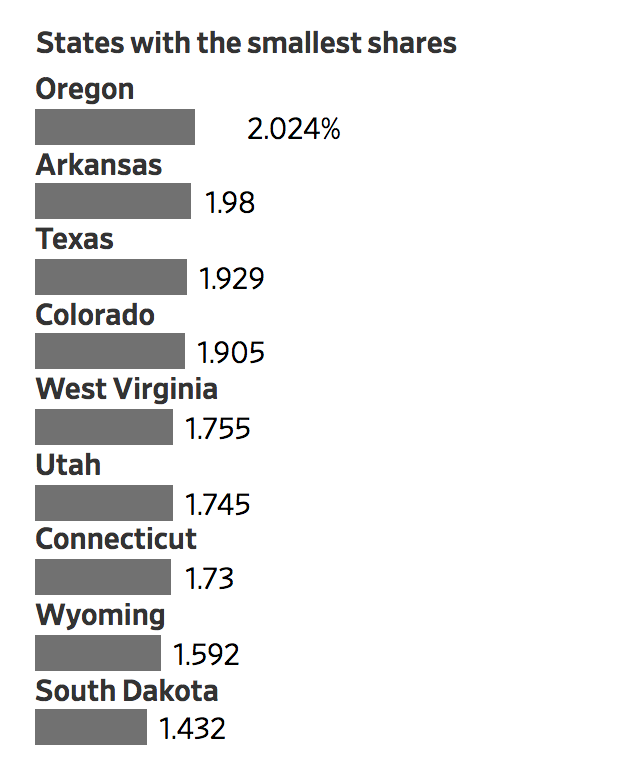 Carol Schroeder, co-owner of Orange Tree Imports, a housewares shop in Madison, Wis., laid off 20 employees last week when the store closed to comply with state orders. Among those dismissed were workers she employed for three decades.

“I told them to go apply for unemployment insurance,” she said. “We’ve paid into it for 45 years, now’s the time to use it.” She plans to seek federal loans so she can pay workers’ health insurance and said she is confident they will return when her business reopens.

The roughly $2 trillion stimulus package passed by Congress and signed into law by President Trump last week is intended to help ease some of the financial pain many laid-off Americans are experiencing.

Labor Secretary Eugene Scalia earlier this week said funds to increase unemployment payments by $600 a week—more than double the existing maximum in some states—will be distributed to states this week, but he didn’t know when states would make such payments to individuals.

States say they are moving as quickly as possible to handle the sharp rise in demand for unemployment benefits. New York, Kentucky and Michigan are instructing unemployment-insurance applicants to stagger filings by day based on their last names. Many state labor departments also are reallocating or adding staff.

“The level of need for unemployment benefits right now is far beyond anything we’ve ever seen in such a short time,” said Gail Krumenauer, communications director at Oregon’s labor department.

Not all Americans who have been laid off or seen their hours reduced are eligible to receive unemployment benefits.

Kate Cavataio, 23 years old, lost her job as a physical-therapist technician in mid-March as patients started calling off scheduled therapy visits due to the coronavirus. Ms. Cavataio applied for unemployment benefits with the state of Michigan, but learned she wouldn’t be eligible because she didn’t make enough money last year.

“I was bummed, but it was just something I had to accept,” Ms. Cavataio said.

Without income from her physical-therapy work, she said, she won’t be able to apply to as many graduate schools as she had hoped.