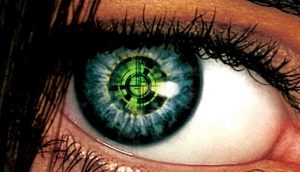 The technology tested to date lets the wearer primarily see in black and white. It is most useful for seeing sharp contrasts, such as the painted white line of a crosswalk on a dark road. But scientists hope that they can improve the detail to eventually enable color (maybe even x-ray, night or thermal imaging) vision in its wearers. Bionic Eyes Seen As The Perfect Spy Tool

Designing a bionic eye has been much more difficult than developing other types of aids, such as a cochlear implant for hearing, say scientists. For one thing, visual information is two-dimensional–both horizontal and vertical coordinates must be sent to the brain–while sound waves needed for hearing are one-dimensional.

Scientists are working to create better video cameras and software, which are external to the eye and easily updated, to better enhance and interpret the information sent to the implant, he said.

Dr. Wyatt and his group at MIT are developing a bionic eye that will contain between 256 and 400 electrodes. They are currently working on their fifth version. Earlier models have been implanted successfully in Yucatán miniature pigs and temporarily in six humans. They are planning to form a company to commercialize their technology. 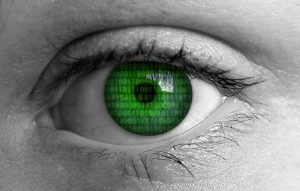 At Stanford University, ophthalmology professor Daniel Palanker’s group has taken a different approach to the problem. Instead of using electrodes, his team developed rows of tiny “photovoltaic” pixels (like solar panels), powered by the pulsed light from the video goggles, which are implanted under the retina. These implants convert light into electric current that stimulates local retinal neurons, which then send signals to the brain, meaning no wires are necessary to stimulate the retina.

Using this technology, Dr. Palanker expects to be able to fit enough light-powered panels to stimulate 5,000 pixels in a space similar to what the other retinal prostheses use. The device is currently being tested in rats and is expected to begin a human trial in a year or two, he said.